BLOG: Women as Peace-builders: Documentary, Out of the Ashes 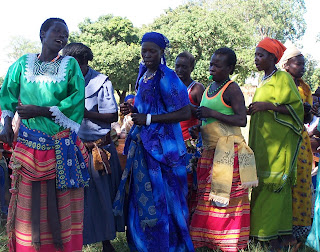 The documentary, directed by Gregory Glaser and David Arno Schwaiger, was produced in 2010 by Sancho Pansa Film Productions as part of CARE Austria's project, Women's Empowering for Peace.

The rebel group, the Lord's Resistance Army (LRA) held the Northern Ugandans and the cross-border Southern Sudanese in fear of murder, rape, maiming, and the kidnapping of children. The LRA abducted an estimated 24,000-38,000 children in Northern Uganda (approximately 20% of whom were girls) to serve as porters, cooks and combatants. Uganda had at least 1.8 million displaced persons, mainly in Northern Uganda as they fled the conflict.

A Comprehensive Peace Agreement was negotiated in January 2006 in Naivasha, Kenya, between north and south Sudan - the northern Khartoum government and the Southern People's Liberation Army - impacting the border regions with Uganda. Despite the peace deal, LRA continued its stand-off with the Government of Uganda, refusing to be party to the agreement. So as Northern Ugandans started returning home from 2006, LRA were still in the region. From 2007-2009, LRA gradually moved out of the area, and into the Democratic Republic of Congo, when the Government of Uganda ordered a relinquishment of guns and weapons. In October 2009, when I was in Northern Uganda, there were still about 494,300 Northern Ugandans in internally displaced persons' (IDP) camps (a reduction from 710,000 in February 2009).

The women in the documentary were strong, feisty, funny, wistful, and always full of emotion, energy and courage. The documentary highlights the fact that without the meaningful participation of women in peace processes there can be no durable peace. I have been in the region since the end of 2005, in both Southern Sudan and Northern Uganda, and have documented in several reports, and in my fictional novel, The Sudan Curse, of the peace efforts in the region and the importance of women in peace dialogues.

An excerpt from the novel, The Sudan Curse, tells of two women of a Pagak peace committee, leaders in their community since 1983. Nyadak said, “During the war my husband fought. I would tell him not to and he would not listen to me. Now, if I say it, he listens.” This was because she had her husband arrested to stop him from fighting in the conflicts. “Prison is a safer place than a war zone. Do you think I would not do it? I did it in 1994. I had my husband arrested for a day until he said he would not go to war.” Nyaluok added, “Women are the peace builders because we have no conflict with any one or any tribe. We intermarry and we trade during war, during tribal conflict, and during peace. That is the way women are.”

The documentary also marks the 10th anniversary of the United Nations Security Council Resolution 1325 on Women, Peace and Security, a major document detailing the participation of women in conflict mitigation and peace-building, as well as the atrocities inflicted on them and their need for protection and rights in times of conflict. CARE International in the Caucasus, with the support of the Heinrich Boell Foundation, screened Out of the Ashes in Tbilisi on December 2, 2010.

But conflict in the region may not yet be over.

Uganda will hold its next general election in 2011—the second election under a multi-party democracy. Uganda's Supreme Court identified a number of concerns during the previous 2006 election, including bribery, intimidation, multiple voting, and vote stuffing in some areas. The Supreme Court also expressed concern about the inadequacy of voter education. Hence, just as we have seen in recent elections in Haiti and the Ivory Coast, the women of Northern Uganda may need to be prepared for any potential dissent and conflict caused by the elections.

In addition, Southern Sudan will hold an independence referendum in January 2011on whether or not it should remain part of Sudan. The referendum was a conditional clause of the Naivasha Cooperative Peace Agreement. Simultaneously, referendums will be held in Abyei, South Kordofan, and Blue Nile (border regions between north and south Sudan) on whether to become part of Southern Sudan or part of Khartoum's northern Sudan. The CPA paved the way for peace in Northern Uganda and started the movement of internally displaced persons out of the camps and into their homelands. Disputes during the Ugandan national election and the Sudan referendum may again be a test of strength and resilience for the women of Northern Uganda.