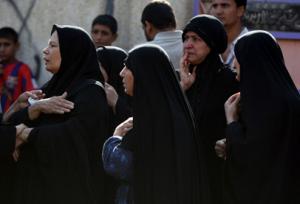 With US forces having completed their pullout, Iraqis are hopeful their country will regain its lofty status in the Arab world, but one group expects little to change for the better: women.

Until the 1980s, Iraqi women were widely considered to have more rights than their counterparts across the Middle East, but they have suffered in the face of brutal violence, Islamic extremism, and a run-down education system.

"It has been a very bad regression," said Nada Ibrahim, an MP belonging to the secular mostly Sunni-backed Iraqiya party, adding that women have paid a heavy price in recent years.

Along with the increase in violence harming their own physical security, it has also resulted in husbands and sons being imprisoned, conscripted into militias or insurgent groups, or killed.

As a result of those factors, as well as the decades of unrest Iraq has suffered -- including the 1980-88 war with Iran, the 1991 Gulf War, and the 2003 US-led invasion that unleashed brutal bloodshed -- there are more than one million widows and female heads of households in Iraq.

Before the Gulf War and the embargo that followed, Iraqi women enjoyed strong protection and opportunities compared with the rest of the region, according to both Human Rights Watch and the United Nations.

HRW notes that, after coming to power in 1968, the Baath Party, which now-executed leader Saddam Hussein would eventually lead, "promulgated laws specifically aimed at improving the status of women in both the public and private spheres."

It guaranteed equal rights for women, mandated primary education, and passed labour and employment laws that improved women's status in the workplace.

But the 1991 war and the ensuing years of sanctions, followed by the violence triggered by the 2003 invasion, eroded those freedoms.

The overall level of violence in Iraq has declined since its peak in 2006-2007, but women remain victims of violence, trafficking, forced marriage at a young age, and kidnapping for confessional or criminal reasons, according to non-governmental organisations.

When the US overthrew Saddam after the invasion, Ibrahim noted, they had good intentions with regards to improving women's rights, but Iraqis were reticent to take them on board because the American forces "were invaders".

"People were against them because all the ideas that came from the Americans, they did not like them," she said.

"However, as the overall situation in Iraq began to deteriorate after the invasion, the focus on women was lost amidst the violence and overall challenges faced by the country."

Safia al-Souhail, an MP who ran in March 2010 elections on Prime Minister Nuri al-Maliki's State of Law slate but has since defected and is now an independent, said US forces made some progress, but did not do enough in the immediate aftermath of the invasion.

"They were always giving excuses that our society would not accept it," she said. "Our society is still wondering why the Americans did not support women leaders who were recognised by the Iraqi people."

She lamented that Maliki had completed a recent official visit to Washington without a single woman in his delegation, describing it as a "shame on Iraq".

Indeed, only one woman sits in Maliki's national unity cabinet, Ibtihal al-Zaidi, the minister of state for women's affairs.

"Yes, women have experienced conflict situations, war and terrorism, but security is getting better in Iraq, and based on that, the situation for women will also improve," Zaidi said.

But she has said that violence is not the only threat to women's rights, noting last month that one in five Iraqi women is subjected to either physical or psychological abuse, often inflicted by family members.

"One-fifth of Iraqi women are subjected to two types of violence, physical and psychological, constituting a very serious danger to the family and society," Zaidi told a conference on fighting violence against women in November.

Anou Borrey, senior gender adviser at the United Nations Development Programme, remains hopeful, despite the uncertainty over Iraq's stability after the US military's withdrawal from Iraq, completed at the weekend.

"There have been discussions about a possible increase in violence, but there's also an understanding of the rule of law, and that people will get punished should women be harassed or hurt or violated," she said.

Borrey added: "I think women are getting more and more organised, they recognise they have potential, they also know they have rights."

In the end, though, Ibrahim said, the responsibility for improving women's rights fell to women themselves.

"It is with Iraqi women that we will change things," she said.