For Tamils, the end of Sri Lanka's civil war has brought no peace dividend; for Tamil women, peace has brought with it a continuation – and in some cases an intensification – of violence and insecurity. In the country's predominantly Tamil-speaking north and east – a region half the size of Nova Scotia – tens of thousands of “war widows” have been living under the control of the central government and Sinhalese security forces since 2009 and the end of the civil war, whose last few months saw as many as 40,000 civilians killed. 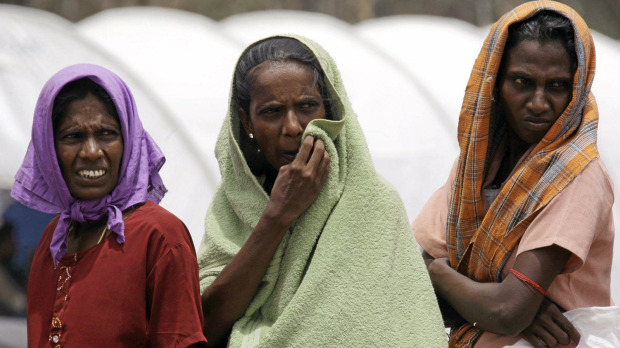 There has been an alarming increase in gender-based violence, including domestic violence, within the Tamil community, as well as forced prostitution and trafficking. All of this is against a backdrop of credible evidence of wartime sexual violence by government forces, including video footage showing soldiers making sexual comments while handling dead, naked bodies of female suspected Tamil Tiger fighters, some with their hands bound. At the UN Human Rights Council session opening late next month, there is a chance to finally ensure accountability and to address the current state of insecurity; Sri Lanka and the international community, including Canada, should take it.

To date, the government's response has been to deny the existence of threats to women's security – past or present. Sri Lanka's ambassador to the U.S. recently claimed that there is “no discrimination for women in Sri Lanka” and reduced the existence of rapes to a “couple of cases,” while a military spokesman said there was no “insecurity issue” for women in the north and east. This would come as a surprise not only to the women and girls from that region who have been victimized over the last three years, but also to women across Sri Lanka who have seen increasing gender disparities in income and higher education, as well as many recent cases of murder, rape and sexual harassment in the south by current and former security force members.

These government denials should also be a red flag to anyone wanting to believe that Sri Lanka's Lessons Learnt and Reconciliation Commission – whose long-awaited report to President Percy Mahendra Rajapaksa was made public in December – represents a change in the regime's approach to accountability and reconciliation. The government has already shown no compunction in ignoring the LLRC's finding that women in the north and east “feel unsafe in the presence of the armed forces,” and, given past performance, there is every likelihood it will disregard the LLRC's sensible recommendations on governance, land issues and a political solution.

Indeed, any positive outcomes that could flow from the LLRC report will likely remain theoretical, given that the report failed to provide a thorough and independent investigation of alleged violations of international humanitarian and human rights law in the final stages of the war, as demanded by the UN and others, including Canada. From the beginning, the government hamstrung the LLRC by giving it a feeble mandate, choosing pro-government commissioners with clear conflicts of interest, and failing to provide any witness protection.

The LLRC's report accepts at face value the largely unexamined claims of senior government and military officials who planned and executed the war, fails to adequately address the many credible allegations detailed in last April's report of the UN Secretary-General's panel of experts on accountability in Sri Lanka, and rolls back well-established principles of international law. In the end, the LLRC works to exonerate the government and, in so doing, undermines its own limited calls for further inquiry, including a call for yet another government investigation of the above-mentioned video footage, which officials repeatedly have described as “faked.”

There is, however, an opportunity to address Sri Lanka's entrenched culture of denial and impunity – including for crimes against women – at the upcoming session at the UN Human Rights Council. Canada has already played an important role in recent months by reminding the world about the need for accountability and justice in Sri Lanka. Now is the time to put their principles into action in Geneva. Canada should take a firm stand at the HRC and work closely with the United States, Britain, other members of the European Union and, critically, African and Asian states – especially India – to make sure this marks the beginning and not the end of a real accountability process.

At a minimum, there should be a formal dialogue at the council to discuss both the LLRC and UN reports, to ensure that the full range of credible allegations of war crimes, and the deficiencies in domestic accountability processes, are addressed openly and in detail. It is essential that the council remain seized of this matter and mandate a high office – such as the UN High Commissioner for Human Rights – to monitor and assess the Sri Lankan government's implementation of the LLRC's recommendations and any further accountability efforts. Finally, Canada and other HRC members should be prepared at this June's session to endorse an international inquiry, absent a truly credible domestic accountability process – an all but inevitable result.

As the international community seeks, laudably, to recommit itself to the protection of civilians in armed conflict, it needs to reflect seriously on what happened in Sri Lanka: arguably one of its greatest single failures to provide even a modicum of safety to hundreds of thousands innocent victims of war. If the opportunity is again missed to provide some form of accounting, the sustainable peace that all Sri Lankans deserve after so many decades of civil war and political violence will be only further out of reach.