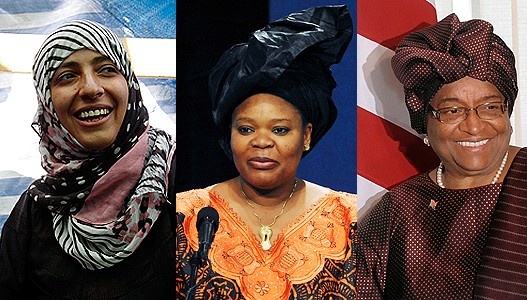 - It's a huge encouragement for and acknowledgement of women working for peace and security. It's also an acknowledgement of the importance of women's participation in the rebuiling process in post conflict areas and in peacebuilding. The prize is very well deserved in many ways, says Lena Ag, Secretary General of the Kvinna till Kvinna foundation.
- I've met Leymah Gbowee several times. She's a very powerful advocate for women's rights. For her and Ellen Sirleaf Johnson to get this prize together, that makes it even more special.


The Nobel Peace Prize Committee gives the price to the three activists ”for their non-violent struggle for the safety of women and for women's rights to full participation in peace-building work. We cannot achieve democracy and lasting peace in the world unless women obtain the same opportunities as men to influence developments at all levels of society.”


The Peace Prize is announced during a politically instable situation in Liberia, close to the upcoming election. There are different opinions among women organizations in the country as to how well president Ellen Johnson Sirleaf has managed to strenghten Liberia, and if she should continue on as president. But they all agree on one thing, the importance of a peacefull election process.
- I was so happy when I heard that Leymah Gbowee and Ellen Johnson Sirleaf had gotten the prize. It's a victory for women's work for peace. I don't think it will affect the election, since that's a totally different issue. But it will affect the view on women and their role in society, says Marpue Speare at the Kvinna till Kvinna Foundation's Liberian partner organization MARWOPNET.
- The nomination of Liberian women will serve as energizer for women in Liberia to push and work harder to keep this country stable at this critical time in our country. These role models, President Sirleaf and Leymah Gbowee, have worked hard to set good pace for our younger women in Liberia, Africa and the world. Today, as we celebrate this award, we gain courage to strive for a violent free elections in Liberia come October 11, says Lena T Cummings from WIPNET in at statement.


- This is fantastic! says Susanne Mannberg, field representative of the Kvinna till Kvinna foundation in Monrovia, Liberia.
- Ellen Johnson Sirleaf has worked for peace and breaking prejudices and stereotypes of what women in Africa can and should do. Just a litte while ago I met two young women – one who wanted to work for the High court and one who wanted to work with politics. For two young women from the Liberian countryside to say something like that would have been impossible only two years ago. That change is due to Ellen Johnson Sirleaf.
- It's a very sensitive situation here right now because of the upcoming election. We don't know the consequences of this yet, says Susanne Mannberg.
BACK
TO TOP