PANEL: From the Field to the UN Security Council

The joint launch was paired with the panel discussion “From the Field to the UN Security Council: Evidence-Based Recommendations for Improving Women, Peace and Security Implementation,” hosted by the Mission of Liechtenstein's and moderated by Liechtenstein's Women, Peace and Security expert, Swen Dornig. Panelists included Bandana Rana of the Nepalese organization, SAATHI, which was featured in Global Action to Prevent War's (GAPW) Participation book; Maria Butler, director of WILPF's PeaceWomen Project and author of the WPS Handbook; as well as Sarah Taylor from the NGO Working Group on WPS, author of the WPS Map Report.

This event and the three publications provide concrete and forward-looking additions to the tenth anniversary of SCR 1325. The WPS Handbook and Map Report focus on gaps and good practices at the policy level, both aiming at promoting accountability within the Security Council. The Participation book demonstrated the robust community case-studies from the field. 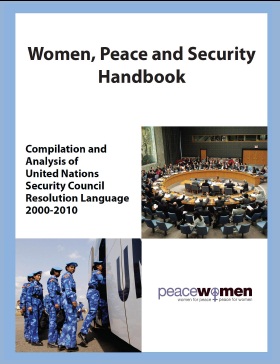 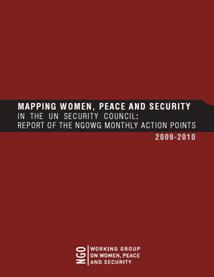 Maria Butler spoke of PeaceWomen's recent handbook, "Women, Peace and Security Handbook" that is to be used as a comprehensive monitoring tool for the UN Security Council and advocates. The handbook examines the Security Council's efforts working within the thematic agenda of women, peace and security. The Handbook examines the degree to which the UN Security Council has internalized the thematic agenda of Women, peace and security in its geographic work over the past 10 years, specifically in the Council's country-specific resolutions. Divided into thirteen thematic chapters, the handbook is a reference guide for both progress made and action to be taken on the Women, Peace and Security agenda. The analysis assesses the consistency with which Council resolutions reflect the language and intent of SCR 1325. Good practice extracts from resolutions are presented and critical recommendations are made. Maria Butler remarked that the core message of the handbook is the need to focus on the integral aspects of SCR 1325, specifically on prevention and participation. The purpose of the handbook is to provide a monitoring device for the Council to follow through with good practice because, "without measuring, nothing gets done".

Sarah Taylor from the NGO Working Group on WPS presented the Monthly Action Points (MAP) report, "Mapping Women, Peace and Security in the UN Security Council." The report reviews the results of the first year of the MAP project, which points out where the Security Council and policymakers have made progress, as well as where they have stagnated in the implementation of SCR resolutions 1325, 1820, 1888 and 1889. The main purpose behind the
report is to reconnect practice with policy through a collection of monthly reports tackling issues, whether by theme or country, informing the Council what partners on the ground are doing and what is needed to be done by the Council members. The greatest challenge identified by the NGOWG has been the difficulty to translate words into action. There has been non-timely and incomplete WPS information in the Council and no true analysis of what has been done and needs to be done on the ground. Key elements that have been reported missing in the Council include a lack of leadership in the Council dedicated to WPS, understanding of WPS topics within the Council and, most importantly, accountability.

Kavitha Suthanthiraraj, the co-author of the publication, and Bandana Rana who is featured in the publication "Promoting Women's Participation in Conflict and Post-Conflict Societies," discussed the content and research process of the publication. This comprehensive publication presents over twenty-five case studies covering the main thematic areas of women's participation: justice reform, security sector reform, disarmament, demobilization and reintegration, peace negotiations and political participation. The objective of the publication is to encourage policymakers at the UN and other international organizations to acknowledge and highlight national and community-based work in the field by women's organizations and civil society seeking for greater participation of women in all levels of decision making in peace processes and participation in peace-building and peacemaking. Bandana Rana discussed how SCR 1325 has helped women directly on the ground. As Nepal entered a transition stage and underwent a volatile post-conflict situation, SCR 1325 helped women's voices to be heard for the first time and put the Nepalese government under the obligation of having to listen to these women and she mentioned the importance of building capacity within civil society and the large gap between policy and implementation.


Following the presentations, the audience engaged in a rich discussion with the panelists. Participants shared their experiences from the UN offices and the field, hypothesized causes for the gaps in SCR 1325 implementation, and recommended how to move forward with the WPS agenda.

Ms. Rana represented not only a perspective from the ground but one from a post-conflict country, which recently launched a National Action Plan on SCR 1325. She described the resolution as an effective tool for hearing women's voices. The filter through which these voices are heard, however, largely characterizes women as victims rather than participants. Although local Nepalese peace agreements now mandate a 33% percent quota for women's participation, women continue to be absent from peacebuilding mechanisms. Ms. Rana called for more compulsory quota systems, mandated gender representation by Member States assisting in peace talks, as well as greater documentation and data collection to change the perception and understanding of women in conflict and post-conflict societies.

Documentation as a form of holding Member States, the UN, and more specifically the Security Council accountable as well as a tool for implementing SCR 1325 received much emphasis throughout the discussion. Cora Weiss from Hague Appeal for Peace along with members of the African Centre for the Constructive Resolution of Disputes, Global Action on Widowhood and the Pacific Islands concurred with Ms. Butler's idiom “what gets measured, gets done.”

A representative from the Lebanese Mission asked where the information chain is breaking down between the field and the Security Council. She cited the Council's reaction time to the summer rapes in the Democratic Republic of Congo as an example. Speaking from her own experience with the UN Mission in Nepal, Ms. Rana suggested that information relevant to WPS gets overlooked within UN organizations in the field. While Ms. Butler agreed that it was the UN Mission in Nepal's responsibility to translate the Council's language in to action, she charged the Security Council members with asking why information of WPS does not appear in country reports. Both she and Ms. Taylor argued for greater accountability in the Council. They criticized the absence of a systematic and consistent approach to WPS. Ms. Taylor called for targeted and dedicated leadership. Referencing Canada's current leadership of Friends of 1325, Chantale Walker from the Canadian Mission suggested that this point of leadership be within UN Women's agenda.

Indeed the initial mandate for WPS lies in the Council, and as such, the policy realm represents a front line for implementing SCR. Nevertheless, Ms. Butler cited the field as the second line of implementation. Following up on this call for action and the example set by Ms. Rana, Betty Achan Ogwaro from Southern Sudanese Women for Peace stated that she would advocate for the implementation of SCR 1325 within in her national peace ministry rather than the gender ministry. A representative from the UN Department for Peacekeeping Operations also urged participants to the discussion to double back their work at the UN Headquarters to the field.

Bineta Diop, cochair of the Civil Society Advisory Group on WPS, Clare Hutchinson from DPKO, representatives from the Gabonese and Burkinabe Mission, as well as Kavitha Suthanthiraraj from GAPW participated in the discussion.

From The Field To the UN Security Council Full Summary