This month, the 64th session of the  Commission on the Status of Women (CSW64) was planned from March 9-20 in New York, with over ten thousand women activists, country representatives, and others planning to attend what is known to be the largest UN gathering on the rights of women worldwide. At CSW64, these women belonging to women’s and feminist movements planned, alongside representatives of governments, to take stock of the progress of the Beijing Declaration and Platform for Action (BPfA) and call for greater accountibility and implementation with maximum available resources for key commitments. However due to ongoing concerns about the spread of COVID-19, CSW64 was shortened from its original two weeks (9-20 March) to one day (9 March), with the remainder of the session postponed to a later date.

In 1995, women’s and feminist movements from around the world joined together in Beijing, China, for the Fourth World Conference on Women. At this conference, the world’s governments adopted the Beijing Declaration and Platform for Action*, which was a landmark platform which should  ensure the rights of women and girls.

Over the past 25 years, the world has experienced rising militarism and state repression, protracted conflicts, increasing inequalities fed by neoliberal policies and capitalist greed, unabated extreme poverty, and climate injustice that threatens the future livability of our planet.

There has been a massive pushback on the rights of women, girls, and LGBTQ+ people throughout the world, including on issues of safety, sexual health and reproductive rights, and the gutting of social protection systems.

This is the context in which we are commemorating the 25th anniversary of Beijing.

Although global feminist movements can look back with pride on our own hard work since 1995, we face the reality that many governments are increasingly hostile to the human rights and dignity of women in all our diversity, including our racial, ethnic, religious, social, cultural, economic and sexual, and familial status.

While in some countries there have been some gains on gender equality, many women and girls worldwide continue to live in poverty, and be impacted by violent conflict, gender-based violence, and varying levels of other types of structural violence that impede their ability to conduct their lives in full potential of their abilities and desires. 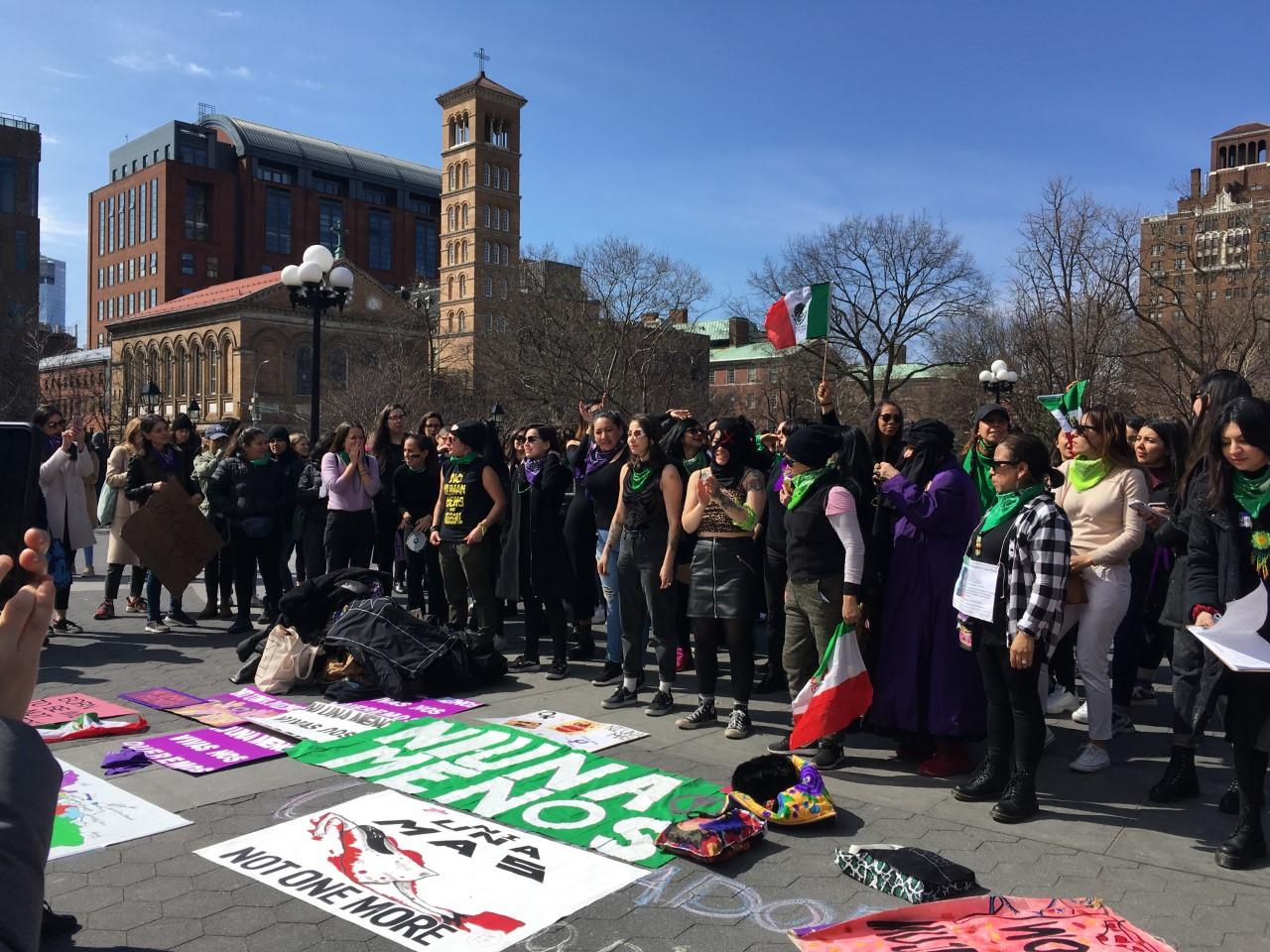 We have little to celebrate when intersecting identities such as race and class still are part of broader systems of oppression. And in the long run, it is impossible to have gender equality without peace -- something which WILPF believes is continually undermined by the fact that military spending is rising because states are prioritising militarised security over human security.

On the one-day CSW on 9 March, governments still adopted a political declaration, a consensus document on gender equality which they pre-negotiated before the conference, and other procedural related decisions.

Unfortunately, the government-adopted political declaration was an extreme disappointment for feminist movements, as it failed to make any new progress or real commitments to gender equality. As WILPF analyses it, the political declaration completely lacked the ambition needed to push women’s rights forward into the next decade, and -- what is worse --  instead merely reaffirmed commitments made 25 years ago.

To address the huge gaps in the political declaration adopted at the CSW by governments, the Women’s Rights Caucus — a global coalition of more than 200 feminist organisations, networks and collectives that advocates for gender equality at the United Nations — has published an alternative, feminist declaration.

The Feminist Declaration outlines a bold and urgent agenda for gender equality and the human rights of all women and girls, and centers the critical role of civil society organisations advocating for accountability in policy and programmes meant to promote, protect, and fulfill human rights for all.

WILPF is a member of the Women’s Rights Caucus, and actively participated in its advocacy and communications working groups this year.

The feminist declaration includes critical issues that governments must tackle to achieve gender equality, including: women, peace, and security; sexual and reproductive rights and bodily autonomy; the intersections between the climate crisis and gender equality; and the role of women’s human rights defenders and feminist movements, who are the key to driving long-term change.

Throughout 2020, there are many other planned events to commemorate key gender equality milestones. October marks the 20th anniversary of UN Security Council resolution 1325, and this year is the 5th year into the Sustainable Development Goals SDGs.

Furthermore, UN Women, along with France and Mexico, have planned to hold two Generation Equality forums in May and July to launch six “Action Coalitions”. These have been described as “global, innovative, multi-stakeholder partnerships to mobilize governments, civil society, international organizations, and the private sector” on gender equality. However, COVID-19 may also delay the holding of the Generation Equality Forums.

It must be noted that as governments and the UN respond to the COVID-19 outbreak around the globe, space for civil society is at risk as well as the protections of human rights and fundamental freedoms that belong to every person. Already there is a surge of governments restricting freedom of expression and assembly, including in private homes.

As WILPF engages in this year’s major milestones, including Beijing+25 and the 20th anniversary of UN Security Council resolution 1325, we will be continually pushing for transformative feminist visions. Although there is much to lament, feminist movements are powerful and vibrant in our calls for change. The CSW and the entire UN system must become a space that actually works for us -- not for entrenched patriarchal power.

Twenty-five years after the adoption of the Beijing Declaration and Platform for Action, the foundational global document on gender equality, governments at an abbreviated session of the UN’s Commission on the Status of Women (CSW) have reaffirmed a commitment to gender equality but, according to leading feminist groups and activists, fell short of committing to the transformative steps necessary to achieve this vision.

To address the gaps in the political declaration adopted at the CSW64 by governments, the Women’s Rights Caucus—a global coalition of more than 200 feminist organizations, networks and collectives that advocates for gender equality at the United Nations—has published an alternative, feminist declaration. The Feminist Declaration outlines a bold and urgent agenda for gender equality and the human rights of all women and girls, and centers the critical role of civil society organizations advocating for accountability in policy and programs meant to promote, protect, and fulfill human rights for all.

“It is not enough for governments to simply reaffirm past commitments. To achieve gender equality, we need to commit to supporting feminist movements and to adopt a bold and forward-looking agenda that addresses the multiple and intersecting challenges faced by all women and girls. We will not be able to achieve gender equality without peace, disarmament, and human rights.”

The feminist declaration includes critical issues that feminist movements believe governments must tackle to achieve gender equality, including: women, peace, and security; the intersections between the climate crisis and gender equality; sexual and reproductive rights and bodily autonomy; and the role of women’s human rights defenders and feminist movements, who are the key to driving long-term change.

“It is inexcusable that, due to backlash from some governments, the women, peace and security agenda was mostly cut from the political declaration. In the 20 years since its adoption, there has been extremely little progress made on ensuring that the rights of women and girls in conflict-affected areas are protected and upheld. The Feminist Declaration launched today reflects the priorities of the feminist movement and provides governments and other stakeholders with a path toward true equality and peace. In such a pivotal year - which includes the 25th anniversary of the Beijing Declaration and  Platform for Action and the 20th anniversary of United Nations Security Council Resolution 1325 on Women, Peace and Security, the UN needs to hold a full CSW that includes the full and meaningful participation of women’s movements from around the world.” - WILPF Women, Peace and Security Programme

RESCHEDULED: Join us for our CSW64 Webinar Parallel Event on April 1st!

Join us for our virtual parallel event, "Feminist Alternatives: Challenge Militarism to Save Our Planet", originally scheduled for during CSW64!

This parallel event brings together feminist activists from different parts of the world who are mobilizing on the inter-connnected crises of climate change, rising militarism, and capitalism. The panelists will explore in depth how environmental destruction is fueled by capitalism and militarism, as well as how feminist visions can challenge these harms. 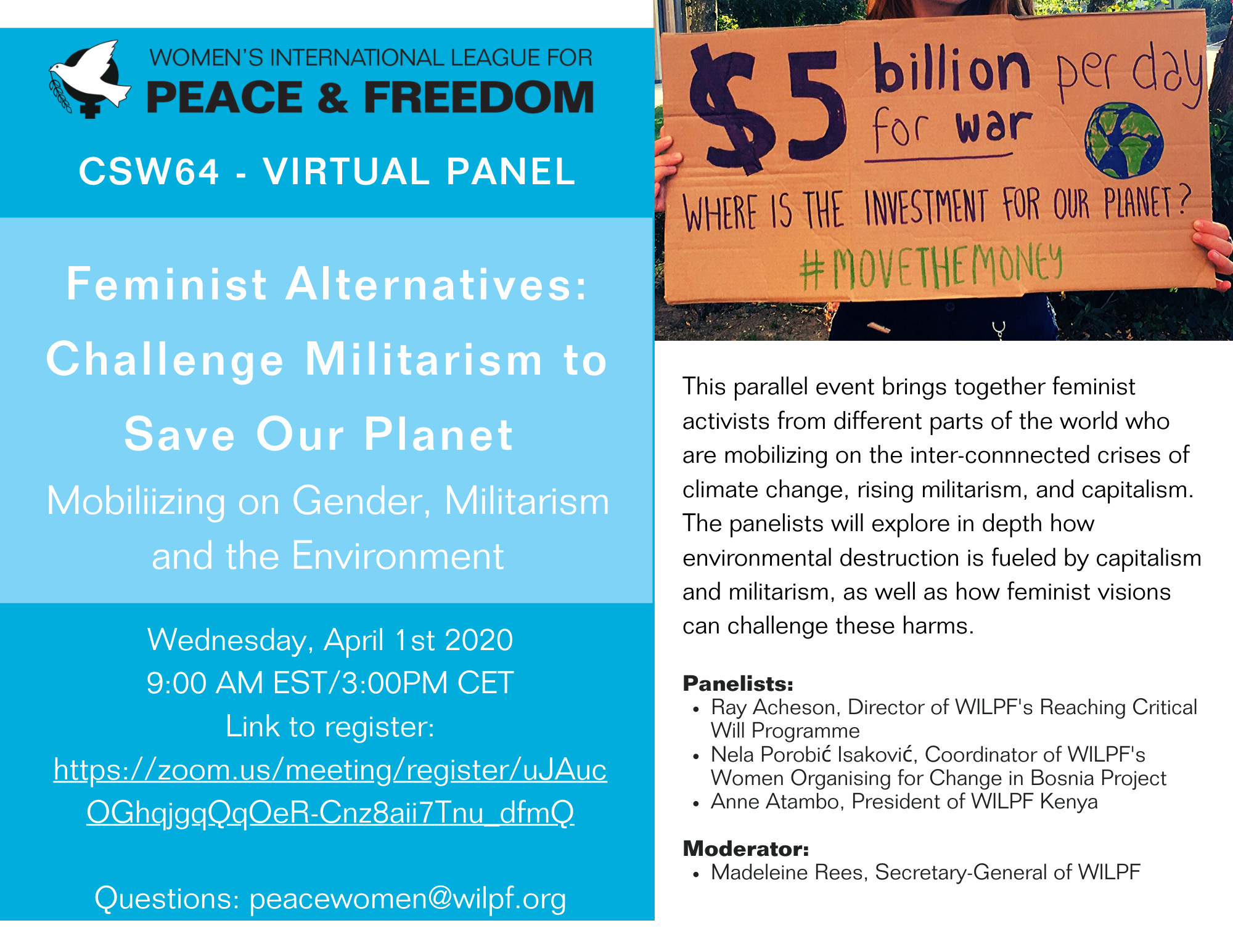 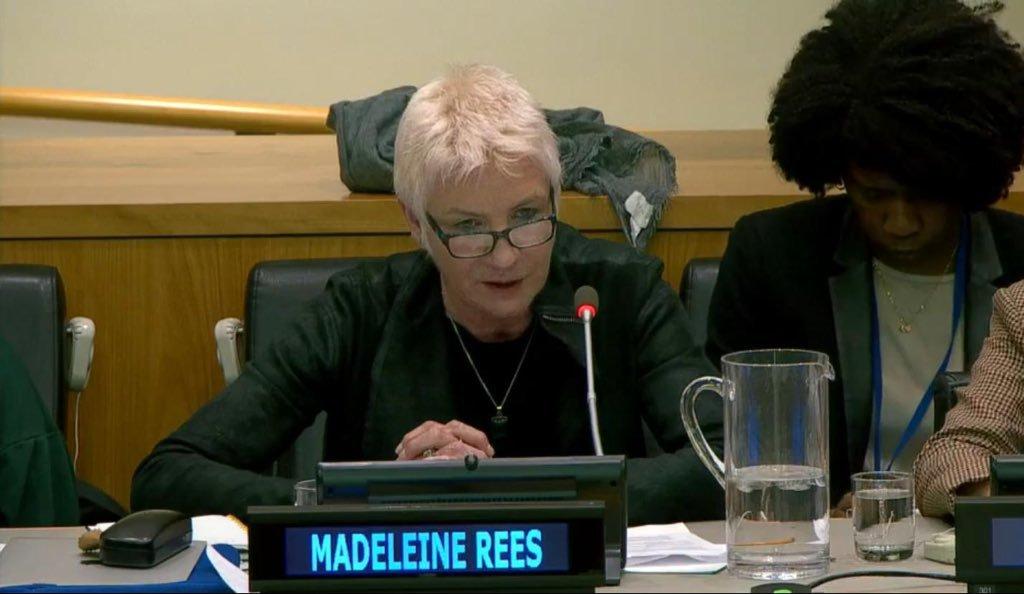 On 21 February the UN Security Council held an Arria Formula meeting on how to ensure an effective and safe environment for women human rights defenders and women peacebuilders.

WILPF Secretary-General, Madeleine Rees, was invited to brief the Council and presented WILPF's recommendations on how to best protect human rights defenders and peacebuilders. She also urged the Council to consider the deep root causes of the problem. Listen to the full intervention here (starting at minutes 14:25).