On the 24th of April Michelle Bachelet, Under-Secretary-General and Executive Director of UN Women, and Hervé Ladsous, Under Secretary General for Peacekeeping Operations briefed the Security Council on Women, Peace and Security. The open briefing was followed by closed consultations with Council members. Briefings by the head of UN Women such as this provide an important opportunity to hear about the situation of women's rights and must be continued by the Council. 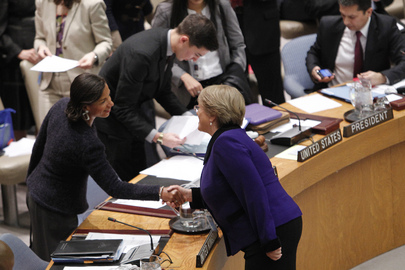 Please click here for a full summary of Bachelet's Briefing.

On the 19th of April the Security Council convened to discuss Nuclear Proliferation, Disarmament and Security. Sadly no mention of gender was made with all speakers including the Secretary-General choosing to ignore the clear link between the proliferation of nuclear arms and material, heightened militarism and its negative effect on women's security.

On April 25th the Security Council convened under the Presidency of the United States to discuss challenges related to the illicit flow of arms, drugs, chemical and biological weapons and people across borders.

The debate on this topic was highly unsatisfactory from a gender perspective, failing to mention the negative impact that trafficking in arms, people and drugs has on women's security and rights. Council members bear the responsibility for this gap, which is particularly notable given the documented links between the proliferation of arms and increased violence against women, not to mention the disproportionate impact of human trafficking on women's security, especially in areas characterized by armed conflict and displacement.

Please click here for a full summary of the Debate

PeaceWomen/WILPF is pleased to announce the launch of Report Watch on our website. This project provides analysis of the women, peace and security content of reports presented to the Security Council by the Secretary-General. The Secretary-General's reports are crucial to providing accurate and full information on the security situation as it relates to women. In tandem with Resolution Watch, Report Watch provides a full analysis of the gaps, weaknesses, and strengths in resolutions and reporting. PeaceWomen believes this reporting will lead to more effective Security Council action and more comprehensive reporting on the women, peace and security agenda. Analysis of country reports is provided by the NGO Working Group on Women, Peace and Security.