For too long, gender inequality has been seen as a problem that has apolitical, social origins. Yet gender inequalities are deeply political. They are a product of actions and omissions of States. This is why the most crucial and the only effective way to address root causes of gender inequality and violence is to address structural causes and changing the logic of States themselves.

2015 was a year of decisions. 2016 will be the year of setting the institutional pillars for what comes next. As we start the 60th Commission on the Status of Women, we must know that we can create a more equal and sustainable world by overcoming obstacles to equality, gender justice, and peace.

The current system facilitates exploitation, war and violence. Citizenship, for a start, has been a long battle for women, with full and equal political decision-making far from being accomplished. Even in 2016, we still have to campaign for the first ever UN Secretary General! Budgetary and financial allocation is another angle from which we can see that gender equality is not a priority: even in those countries in which gender budgets have been implemented to reduce inequalities, less that 1% of the total national budget has been addressed. And we continue to invest $1.7 trillion in global arms – while, as Malala has pointed out, just eight days of this spending would provide universal education for girls and boys everywhere.

Women all around the world face economic oppression due to the burden of unpaid care and domestic work, to the point in which this is the main obstacle for women to exercise their rights: they are expected to fulfil their role as care-givers before they can undertake a decision in life regarding education, work, political participation or any other field. Women, especially women of colour, subsidize the entire economy with their unpaid work, and the other actor who is in the capacity to act and modify that situation is the State. Women in situations of conflict and state collapse put their bodies and lives on the line to cover gaps in social support and fabric abandoned by the State.

Implementing commitments on sustainable development from 2015 – including the Sustainable Development Goals, High Level Political Forum, and Financing for Development Forum – in a way that eliminates inequalities and promotes structural transformation will be critical to moving forward. Structural transformation requires building on women’s human rights at Beijing (1995), Cairo (1994) and the Women, Peace and Security Agenda (including the 2015 Global Review). At the regional level, the promise of our regional Sustainable Development Forum (and perhaps Financing for Development regional Forums?) is one opportunity to deepen that path. At national and local level, we need to revise the legal and programmatic frameworks, as well as their respective fiscal structures, around principles of gender equality, disarmament, and peace so that implementation really goes hand-in-hand with the aspirations of an equal and sustainable world.

The challenges that the world is facing right now are not only because the problems are too huge. The challenges are that we need to change ourselves and the very structure that is meant to lead that change. States must recognize that their military expenditure is excessive and reallocate budgets towards gender equitable sustainable development; but further, we must demand States rethink all of their dynamics, with the rights and flourishing of those most at risk as the baseline for success.

The challenges are great, but are not up in the air: the time is now to take action! Demand that your states make a paradigmatic shift for a world that we want to see now. Not tomorrow, but now.

Introducing the WPS Global Study. Chapter 3: Women's Participation and A Better Understanding of the Political 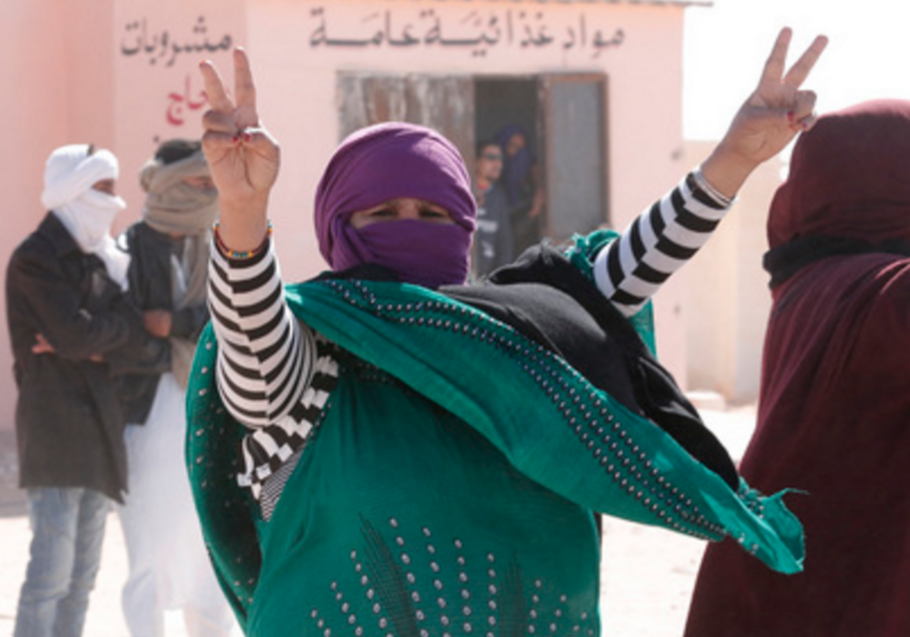 The Global Study on UNSCR 1325 is the evidence base for action. Learn more about it through this series highlighting key recommendations and join us in taking action!

Chapter 3 of the Global Study on Women, Peace and Security addressed women’s participation. According to the study, actors involved in mediation and conflict resolution remain resistant to including women, claiming success is judged on effectiveness, not inclusiveness. Yet the history of traditional peacemaking is littered with examples of failed mediation attempts and broken peace agreements. Conversely, a growing body of evidence shows unequivocally that women’s participation contributes to the conclusion of talks and the implementation and durability of peace agreements.

Commission on the Status of Women 60 has arrived!

The Commission on the Status of Women (CSW) 60 is here! PeaceWomen and WILPF are thrilled to participate again this year. Join us in our main event:

We are also engaging in a variety of other events to strengthen feminist mobilisation for change:

Don’t forget to read our written statement for this year!

In a year where the focus is on implementing the 2015 Sustainable Development Goals, it is critical to recognise that women’s economic empowerment is a means for conflict prevention. Moving the money away from arms trade and war and redirecting our resources to invest in gender equitable sustainable development is critical for women’s human rights and peace. 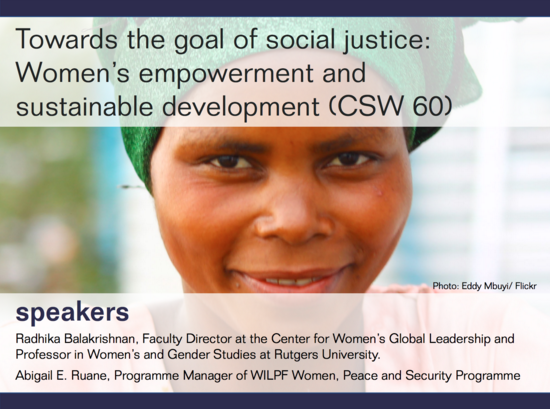 As part of our preparations for the 60th Commission on the Status of Women and as part of our ongoing webinar series by the WILPF Academic Network, WILPF hosted a webinar on March 2, 2016, on the topic, “Towards the Goal of Social Justice: Women’s Empowerment and Sustainable Development (CSW 60).” The discussion of this webinar focused on shifting the current economic and security paradigm to promote people over profit for human rights, human security, and sustainable peace.

WILPF PeaceWomen Programme Director, Abigail Ruane, introduced the webinar, highlighting how investing in gender equitable sustainable development is a key element of conflict prevention and sustainable peace. She highlighted how the 1987 Brundtland Report and subsequent Rio conferences on sustainable development supported a holistic understanding of development based on the intersection of environmental protection, social development (including women’s human rights), and economic development. Peace activists and women human rights defenders from Syria to the Democratic Republic of the Congo and beyond have brought attention to the incompatibility of human security with prevailing military arrangements. Strengthening women’s substantive participation and rights and moving from an economy of violence and war to an economy of gender justice is critical for sustainable and democratic peace.

The Center for Women’s Global Leadership (CWGL) Faculty Director Radhika Balakrishnan then provided a gender analysis of current macroeconomic policies and explored how to promote human rights through macroeconomic policy. She spoke on the importance of addressing women’s limited access to education, budgetary cuts to healthcare, and unpaid work, which is  provided disproportionately by women on a daily basis. Balakrishnan analysed the way countries respond to global economic instabilities often disproportionately impacts women and girls. She reminded participants that the international community has made strong and comprehensive commitments to gender equality and women’s rights. Human rights treaties, mechanisms and instruments have addressed the issues of women’s participation and leadership and women’s access to and control over resources, and we need to strengthen accountability on these commitments including through macroeconomic policy.

For the full recording of the webinar, please check WILPF’s YouTube Channel.