Highly militarized societies where weapons and guns are present in the daily lives of civilians constitutes a threat to the individual security of both women and men, but it is also a threat to sustainable peace and democracy. Women's political participation in too many countries of the world is limited and made impossible by militarized structures. The connections between the Women, Peace and Security Agenda and the Disarmament Agenda is critical for the work done by WILPF on local, national and international levels and the two WILPF projects, PeaceWomen and Reaching Critical Will, constitute cornerstones in that work.

Last month, during the Arms Trade Treaty (ATT) negotiations at the United Nations Headquarters in New York, we had the opportunity to clearly make the linkages between the work done on national and international levels, as WILPF members from several sections, including Sweden, Spain, Mexico, the U.S. and the Philippines, participated in workshops and events raising the issues of women's security and disarmament.

WILPF was active at numerous events and consistently visible during the ATT, through Reaching Critical Will's ATT Monitor and by way of statements and advocacy efforts.

One of the key events hosted by WILPF discussed how the ATT and the Convention on the Elimination of All Forms of Discrimination against Women (CEDAW) along with the UN Security Council Resolution 1325 et al. can work to prevent gender-based violence (GBV), particularly in conflict and post-conflict situations. The event was held at UN Women headquarters, with partners IANSA, IAW, WILPF and UN Women. This issue includes a summary of both this event and the July 12th Gender and the ATT Side Event.

A number of WILPF sections also raised the issue on the national level in the weeks leading up to the negotiations. WILPF DRC held a seminar on the theme, "United Nations Arms Trade Treaty: Engagement and Impact," where the effects of the traffic of Small Arms and Light Weapons on women's security was in focus. The section concluded their discussions with the statement that "a robust Arms Trade Treaty can make a difference for millions of people confronted with insecurity, deprivation and fear."

WILPF Mexico arranged two workshops on the role gender plays in armed and violent crisis and how the UN Arms Trade Treaty can help to regulate and stop this situation within their national context. They concluded that there is a huge need to coordinate civil society to organize and protest against armed society and especially its effects against Mexican women.

WILPF has argued for an international arms treaty since our establishment in 1915. Even then, the connection between disarmament, sustainable peace, security and women's participation was obvious to the founders. Sadly, we are still working on the same agenda and will continue to do so as the ATT negotiations did not result in a treaty. The member states did not manage to reach conclusion and adopt a treaty that actually could make a change and end the human suffering caused by a world filled with arms.

In 2015 WILPF celebrates its 100th anniversary and we will once again set the security agenda for the coming century. We will continue to make the connections between the local and global, between women's security and militarization, between development and disarmament.

We will create a community of PeaceWomen determined to make the coming 100 years a century of action and implementation and we are inviting you to join. 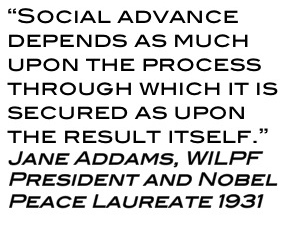 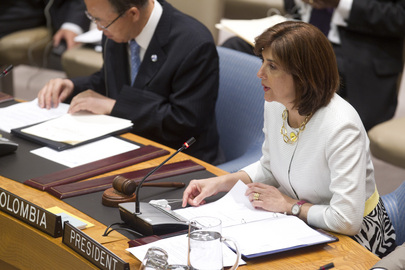 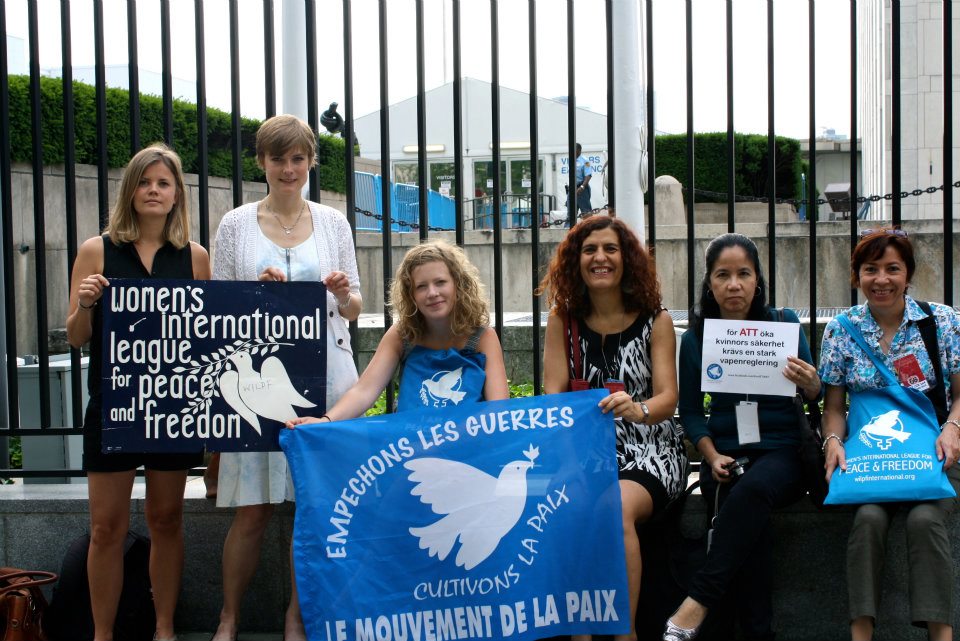 WILPF Training Session, Wednesday July 11th: Five WILPF Sections (the Philippines, Spain, Mexico, the U.S. and Sweden) participated in a one-day training session that focused on enhancing the work on a national level concerning arms trade and military expenditure and coordinate such work with an international strategy. The training included discussions on how WILPF sections can work with these issues, the prioritization of aspects important to each section and the drawing up of plans for further national projects.

Gender and the ATT, Thursday, July 12th (1:15 - 2:30): A Side Event on Gender and the ATT was held at the Permanent Mission of Finland to the UN, with partners WILPF, Amnesty International and IANSA. The event was attended by 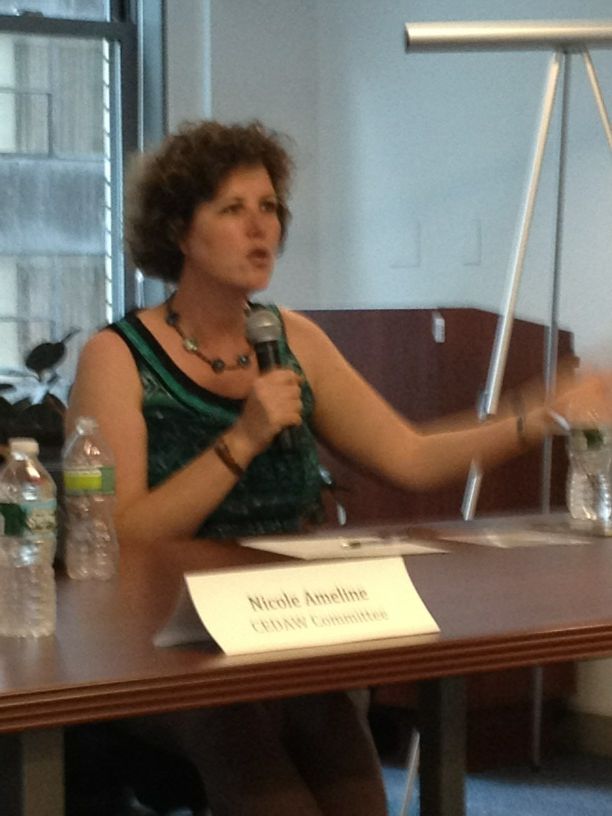 more than 100 participants. Speakers addressed how the ATT could include specific gender criterion and thereby contribute to preventing gender-based violence. Madeleine Rees stressed that the ATT would be written within a legal framework of international law in which gender mainstreaming in the UN is already an obligation; thus, an ATT that does not take gender-based violence into account is not an option.

Women's Human Rights, the ATT and CEDAW, Friday, July 20th (1:15 - 2:45): The event was hosted at UN Women headquarters, with partners IANSA, IAW, WILPF and UN Women. Its focus was how the ATTy and the Convention on the Elimination of All Forms of Discrimination against Women (CEDAW), along with the UN Security Council resolution 1325 et al. can work to prevent discrimination against women and gender-based violence (GBV), particularly in conflict and post-conflict situations. 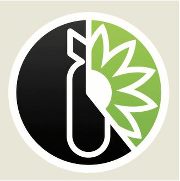 Editorial: A Pause for Reflection by Ray Acheson - Reaching Critical Will of WILPF

On Friday afternoon, the Arms Trade Treaty (ATT) negotiation conference closed without adopting a treaty. During the morning plenary, the United States, followed by Cuba, DPRK, Russia, and Venezuela, declared that negotiations needed to be extended. Thus the six year process to develop at ATT failed to achieve its goal. Furthermore, the draft treaty that would have been adopted was much weaker than the one envisaged by those who initiated the process in the first place. And so while this particular course has ended without a treaty, it is by no means the end of the road for an ATT altogether.

Moving Forward: Is there recourse for the Arms Trade Treaty? Read more about this and the gender-based violence terms that were included in the final draft text.

Leadership Institute coordinated by the Center for Women's Global Leadership in 1991. Participants chose the dates November 25th - International Day Against Violence Against Women - and December 10th - International Human Rights Day - in order to emphasize that violence against women must be categorically regarded as a human rights violation.

Since the campaign's inception in 1991, 16 Days has been used as an organizing strategy by individuals and groups globally, with over 4,100 organizations in approximately 172 countries participating. While the activities orchestrated by each organization to call for the elimination of violence against women have varied widely, all efforts have reflected the mission of the campaign to: 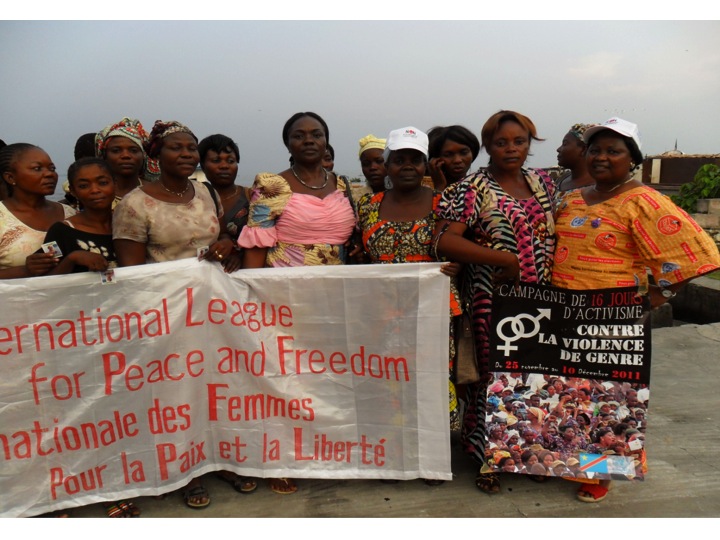 The 2012 16 Days Campaign theme will continue with its 2011 theme, From Peace in the Home to Peace in the World: Let's Challenge Militarism and End Violence Against Women! This will mark the third year that 16 Days seeks to address the intersection between gender-based violence and the global military machine. Once again, WILPF sections around the world will participate to protest the impacts of militarism. Previous activism efforts have included training sessions, film screenings, demonstrations and conferences, and WILPF looks forward to supporting 16 Days this year with an equally diverse schedule of events.

Check out WILFP's flyer for the 2012 campaign and visit the Center for Women's Global Leadership website to download the full Take Action Kit.