Is MONUSCO Taking Women's Priorities into Account in its Work?

This month, the UN Security Council (UNSC) will be discussing the future of the mandate of the United Nations Organization Stabilization Mission in the Democratic Republic of the Congo (MONUSCO). Among the questions are whether the UNSC must determine an exit strategy for the mission or continue with revised elements to its mandate. This discussion is coming at a time where conflict and instability are escalating in the Democratic Republic of Congo (DRC), with significant impacts on women and girls.

Over the past few weeks, violence has escalated in the eastern DRC, with attacks in Ituri, North Kivu, and South Kivu provinces. This violence has resulted in over a thousand reported civilian deaths, and has also included an increase in sexual and gender-based violence. Five million people are currently displaced in the DRC, which is the second-highest number globally after Syria, and 1.7 million people fled violence in the DRC in 2019 alone. The economic impacts of the COVID-19 pandemic have been keenly felt by internally displaced people, particularly women and girls, throughout the country, as well as others who rely on the informal sector to survive. The spread of the COVID-19 virus has additionally compounded existing public health challenges in the DRC, including measles and the resurgence of Ebola. As of mid-June 2020, there are almost 5,000 reported cases of COVID-19 in the DRC, but the real number of cases is suspected to be significantly higher. As decisions on the effectiveness and direction of MONUSCO are to be made, it is important to keep in mind the role this mission has played in addressing women, peace, and security issues in the DRC.

In his recent reports, the Secretary-General reported on the implementation of Women, Peace and Security priorities to address these challenges facing the DRC. The March report of the Secretary-General on MONUSCO (S/2020/214) highlights progress in strengthened women’s political participation, greater capacity building for women politicians and women journalists, and the launch of a national police plan against sexual violence. The April report on the implementation of the Peace, Security, and Cooperation Framework for the DRC and the Region (S/2020/272) also reported that the Office of the Special Envoy continued to advocate for women’s participation in electoral processes, and held meetings and workshops with civil society on issues of women’s economic empowerment, access to decision-making, and responding to violence against women.

Since the Gender Office was moved from Kinshasa to Goma, there have been limitations on the ability of women civil society leaders to engage with MONUSCO on key issues. Women civil society leaders report that the barriers to participation have had an impact on the way MONUSCO responds to the issues of sexual violence and protection of civilians. Broader implementation of the WPS agenda is significantly lacking in MONUSCO’s work. The effects of the COVID-19 pandemic have further heightened the risks of SGBV for women and girls, and led to an increase in human rights violations. Women civil society leaders report that MONUSCO largely fails to take into account the prevention of violence against women and girls, including sexual violence, in their work.

Furthermore, women and girls continue to lack adequate access to justice, reparations, and non-discriminatory services including medical and psychosocial support. There is no law against domestic violence and marital rape in the DRC. These important issues must be addressed by the Council in their discussion on MONUSCO, and it is vital that MONUSCO works to engage with women-led CSOs who hold expertise on how to effectively respond to GBV and sexual violence in conflict.

As discussions continue to consider the effectiveness of the MONUSCO mandate, the logic in continuing its work into the future, and the possibilities for altering course toward a mandate that answers to the realities of the conflict in the DRC, it is critical to remember that the impacts of the violence and the decisions made in New York reverberate multifold in the lives of women and their communities. The next phase for MONUSCO must center their priorities. 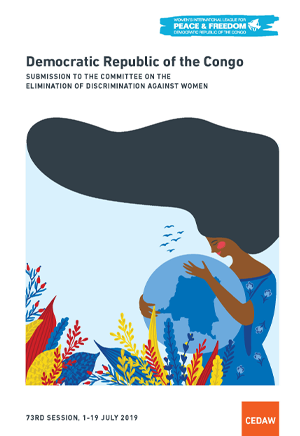 WILPF DRC submitted a report in 2019 for the 73rd session of the Committee on the Elimination of Discrimination against Women (CEDAW). The submission focuses on the right of women to participate in the political and public life, the implementation of the Women Peace and Security Agenda, discrimination at work, domestic violence and the impacts of small arms and light weapons on gender-based violence.

As protests erupted across the United States in response to the murder of George Floyd by police in Minneapolis, heavily militarised police forces responded violently against people in the streets.

As a feminist anti-militarist organisation, on 4 June, WILPF International Secretariat released a statement on systemic racism and police brutality. Read the statement in English, French or Spanish.

WILPF also joined family members of victims of police killings and over 600 rights groups in calling on the United Nations Human Rights Council to investigate the escalating situation of police violence and repression of protests in the United States.

Ensuring human security over militarized security is vital for the prevention of armed conflict as well as the protection of people and planet. As a Global Organizing Partner of the Women's Major Group (WMG), WILPF has been continuing its work in 2020 to leverage the Sustainable Development Goals (SDGs) for women, peace and security. Many WILPF Sections work on the SDGs as part of their work for peace, gender justice, and a healthy environment. Our program is working with sections to map their existing work on the SDGs and support them in their work.

This year, with a virtual High-Level Political Forum (HLPF) on Sustainable Development, and as part of the WMG, we have continued in our feminist advocacy on the inextricable interlinkages between sustainable development and sustainable peace. Read our contributions to the WMG position paper and short advocacy briefs (briefs available in English, French, and Spanish) on each of the entry points identified in the first Global Sustainable Development Report (GSDR).