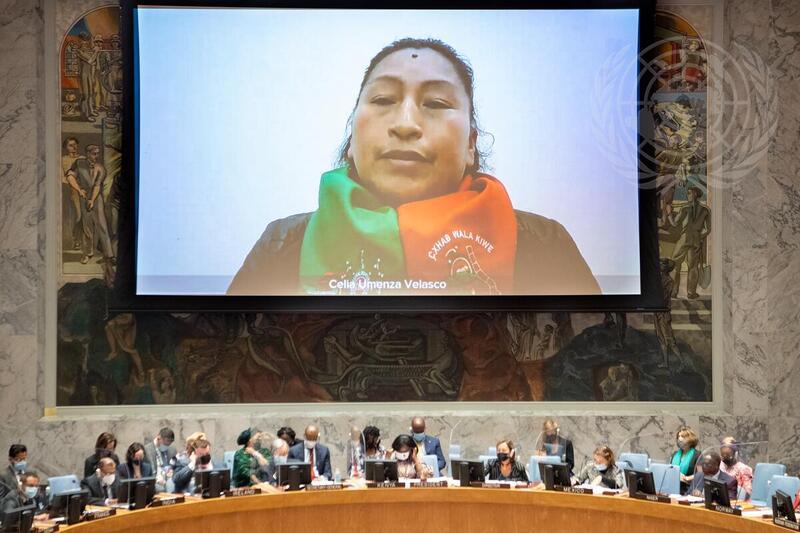 On 21 October 2021, led by the Kenyan presidency, the UN Security Council (UNSC) held its annual Open Debate on Women, Peace and Security under the theme “Investing in Women in Peacekeeping and Peacebuilding”. Celia Umenza Velasco, member of Cxhab Wala Kiwe, Association of Councils of the North of Cauca, spoke as the civil society briefer on behalf of the NGO Working Group on Women, Peace and Security. She briefed the Council about the rising violence against human rights and land defenders in Colombia, including against Indigenous leaders who are targeted for challenging powerful economic interests and opposing damaging extractive and infrastructure projects on their territories.

Recognizing militarization as a barrier to women’s rights and peace
Last year, WILPF’s global report on 20 years of WPS implementation found that the agenda has suffered from a gap between commitments and action due to a variety of factors, including a lack of accountability for implementation and rising militarization. Militarization is a fundamental barrier to peace that directly contradicts the WPS agenda and undermines conflict prevention and the durability of peace after violence has reduced.

The 2021 report of the Secretary-General on Women and Peace and Security reflected these WILPF findings, and called for reducing military expenditure as a priority for WPS implementation. The report highlighted that “curbing military spending...is especially resonant in the current moment, when people’s lives and security are threatened by disease, forced displacement, hunger, racism, violent misogyny and the climate crisis.” Secretary-General António Guterres and Executive Director of UN Women Sima Sami Bahous focused portions of their briefings on the harms and tradeoffs resulting from rising militarization. Secretary-General Guterres highlighted that these issues are not separate from, but integral to WPS, stating that “conflict prevention and disarmament are at the very heart of movements that have been led by women for over a century for peace”. As in past open debates on WPS, most states, however, did not engage substantively with these issues, reflecting an ongoing gap in member state attention to root causes and some of the structural barriers to implementation.

Our analysis of the 2021 debate
WILPF's analysis of this year's debate comments on themes, such as militarization and conflict prevention, that we assess as being critical for the holistic implementation of the WPS agenda. In our article, you can read more about some of the themes that came up in this year's debate, as well as our commentary on mechanisms to ensure women's participation, the prevention pillar, incorporating WPS into country action at the UNSC, and national-level implementation and financing.

In a letter to United Nations (UN) agencies and member states, Feminist Action for Afghanistan, a global coalition of feminist women’s rights organizations, and Afghan women leaders condemns a growing pattern of exclusion of Afghan women from key mechanisms to address Afghanistan’s humanitarian crisis. In advance of next week’s recognition of the anniversary of the UN Security Council Resolution on Women, Peace and Security (UNSCR 1325), the coalition is calling for governments and UN agencies to ensure that Afghan women’s representatives are involved at all stages of negotiations on economic support, trade, security and governance in Afghanistan.

Upcoming Event - The WPS Agenda in Palestine: Challenges to the Implementation of UNSCR 1325 Under Occupation

Join WILPF and the General Union of Palestinian Women (GUPW) for a panel discussion on the sidelines of the 21st annual UN Security Council Open Debate on Women, Peace and Security (WPS). The panel will address the gendered impacts of the Israeli occupation in Palestine, and reflect on the challenges to the implementation of the WPS Agenda in this context.

Expert panellists will discuss current efforts to advance the WPS agenda in Palestine, including the second generation of the National Action Plan (NAP). Speakers will also analyse the situation of Palestinian women under occupation, touch upon the gendered impacts of the ongoing practice of home demolitions in the occupied territorries, and reflect on the situation of Palestinian refugee women in Jordan.

This event is hosted in collaboration with UN Women Palestine and the generous contribution of the Government of Norway.

Starting the Conversation about Men, Violence, and Peace

As part of WILPF’s global initiative in partnership with the MenEngage Alliance, ten different WILPF Sections are currently working to understand how men can be involved in efforts to support women’s rights and the pursuit of feminist peace.

Our programme is contributing to the Mobilizing Men for Feminist Peace project by leading the project communications and working on joint advocacy on the WPS agenda.

Read more about some of the project work at the national level in Cameroon, the Central African Republic, Lebanon, and Zimbabwe.