From Simple Acts of Solidarity to Movements for Change -- PeaceWomen E-News, April 2014

If you have any difficult reading this newsletter in HTML, view it online. 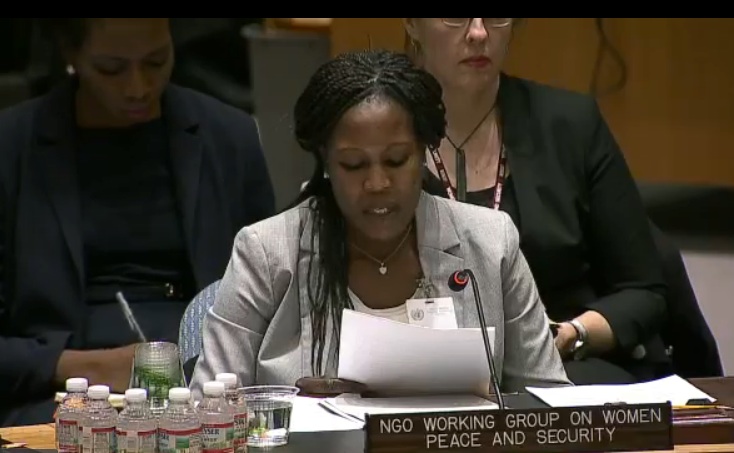 I look forward to that moment that breaks the mechanical format of an Open Debate of the United Nations Security Council (SC) through a simple act of solidarity: I look forward to when we civil society representatives applaud for the civil society statement from our seats all the way at the back of the SC Chambers. It is a challenge of the silent status quo, an act of nonviolent resistance, and a demand to further strengthen women's voices for peace.

At last week's Open Debate on Sexual Violence, Rhoda Misaka, a civil society representative from South Sudan, spoke powerfully about the recent atrocities in South Sudan, the exclusion of women from peace talks, root causes of violence and conflict, impunity of perpetrators and the need for gender-sensitive disarmament. (Read her statement at the Open Debate here). The focus and momentum for action against sexual violence seeming to be here has the opportunity continue at the Global Summit to End Sexual Violence in Conflict in London on June 10-13 2014. WILPF will be engaging in numerous ways and WILPF calls for a focus on prevention of conflict and arms proliferation. We will address the continuum and complexities of sexual violence highlighting and underlining the agency and participation aspects of this agenda. “We are not talking about making war safe for women,” to echo a peace advocate message on Women, Peace and Security; instead, we are talking about ending violence and war altogether, will be taking our message of “women's power to stop war” to London.

A backdrop to the Open Debate last week was that it took place at a time when the Council is very divided with the on-going situation in Ukraine (see this edition's news below). Women's groups are voicing their opposition to the militarization, war rhetoric and ongoing violations, like in this video by the women of peace from Ukraine and Russia group and this overview by the Nobel Women's Initiative. The international community must listen to their call to prevent war and their recommendations for finding solutions. 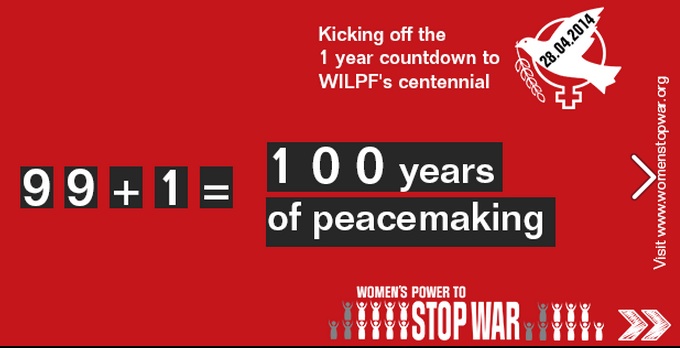 This week also marks the 99th anniversary of WILPF! Now we begin the official one-year countdown to our 100th Anniversary of women's peace activism - the pinnacle of the Women's Power to Stop War movement! We invite you to join us in April 2015 in the Hague for WILPF's 100th Peace Summit (“Women's Power to Stop War” Conference), and to share your experience as we prepare for the October 2015 Women, Peace and Security High Level Review and Global Review. For Women, Peace and Security (WPS), 2015 will be a critical time and we are now developing way to better hear your voices – stay tuned! Taking a look back at the history of WILPF and commenting on the movement, feminist writer Cynthia Cockburn says, “it is this holistic, multi-facetted struggle for a nonviolent revolution in the relations of gender, class, ethnicity and nation to which we shall soon commit ourselves anew in our forthcoming centenary Manifesto.” Read Cynthia Cockburn's full article on Women's Power to Stop War here. This year we will continue to share information and ways to engage in the movement.

This edition of E-news provides articles on the Open Debate on Sexual Violence, on the Debate by the President of the General Assembly on stable and peaceful societies and the first article in a series on our work in the Middle East and North Africa (MENA) Region. It also features news from Ukraine, Bangladesh and the Marshall Islands. We are also excited to share with you our final WPS report on the Commission on the Status of Women 58. Enjoy!

Ending Discrimination and Enforcing the Women, Peace and Security Agenda in the MENA Region 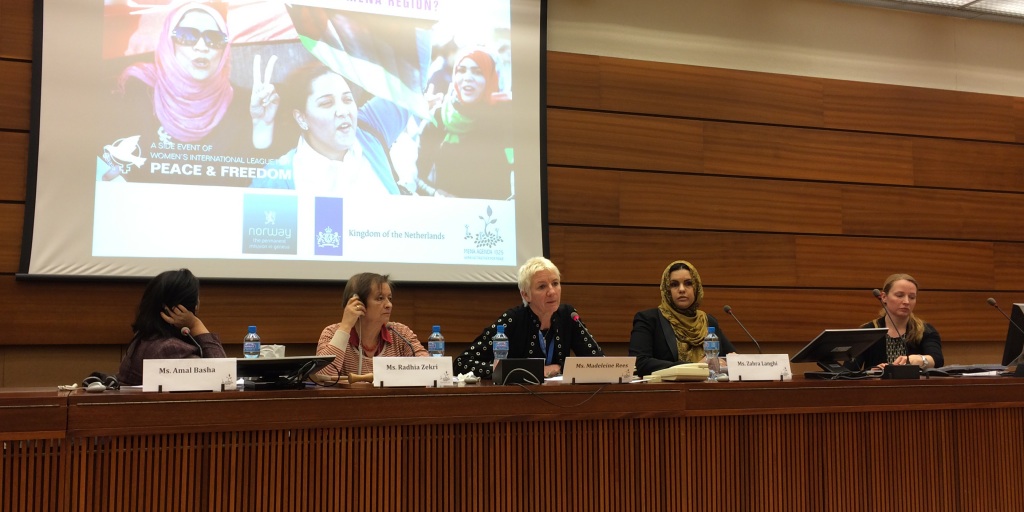 WILPF's MENA project introduces a unique agenda and mobilises women's organisations in eight countries in the region: Iraq, Libya, Tunisia, Egypt, Jordan, Lebanon, Yemen and Morocco. In 2012, WILPF International devised a project to respond to the unprecedented political events and the ramifications for women in the MENA region. Now running in its third phase, the MENA agenda 1325-project is focusing on advancing women's rights by building the capacity of women to engage and participate in peace and security issues and to challenge the militarised security frameworks currently in place in most countries in the region.

At the international level, the project focuses on providing analyses, submissions and access to the multilateral fora, such as the Human Rights Council, the human rights Treaty Bodies including the Committee on the Elimination of Discrimination against Women (CEDAW) and the Security Council. In January this year, WILPF hosted a historic Arria Formula meeting of the Security Council where we brought Syrian women to New York to highlight the need for women's meaningful inclusion in peace processes. In WILPF's latest event at the Human Rights Council Session, we brought attention to the need for women's rights to shape the new constitutions in the MENA region. At national level, specific action plans are being implemented in each country to accommodate the local context. Each National Action Plan seeks to enable women grassroots organisations to discuss and respond to topics related to security, militarisation and disarmament, in accordance with the United Nations Security Council Resolution on Women, Peace and Security, the CEDAW Convention and especially the new General Recommendation 30.

As part of the work to strengthen collaboration between WILPF's MENA project and the New York based PeaceWomen team, PeaceWomen will be enhancing the MENA project's advocacy, monitoring, evaluation and capacity-building work. From now on, PeaceWomen's E-News will feature monthly articles on key MENA issues as well as other MENA resources, events and initiatives. Stay tuned and check out the WILPF MENA website for more information. 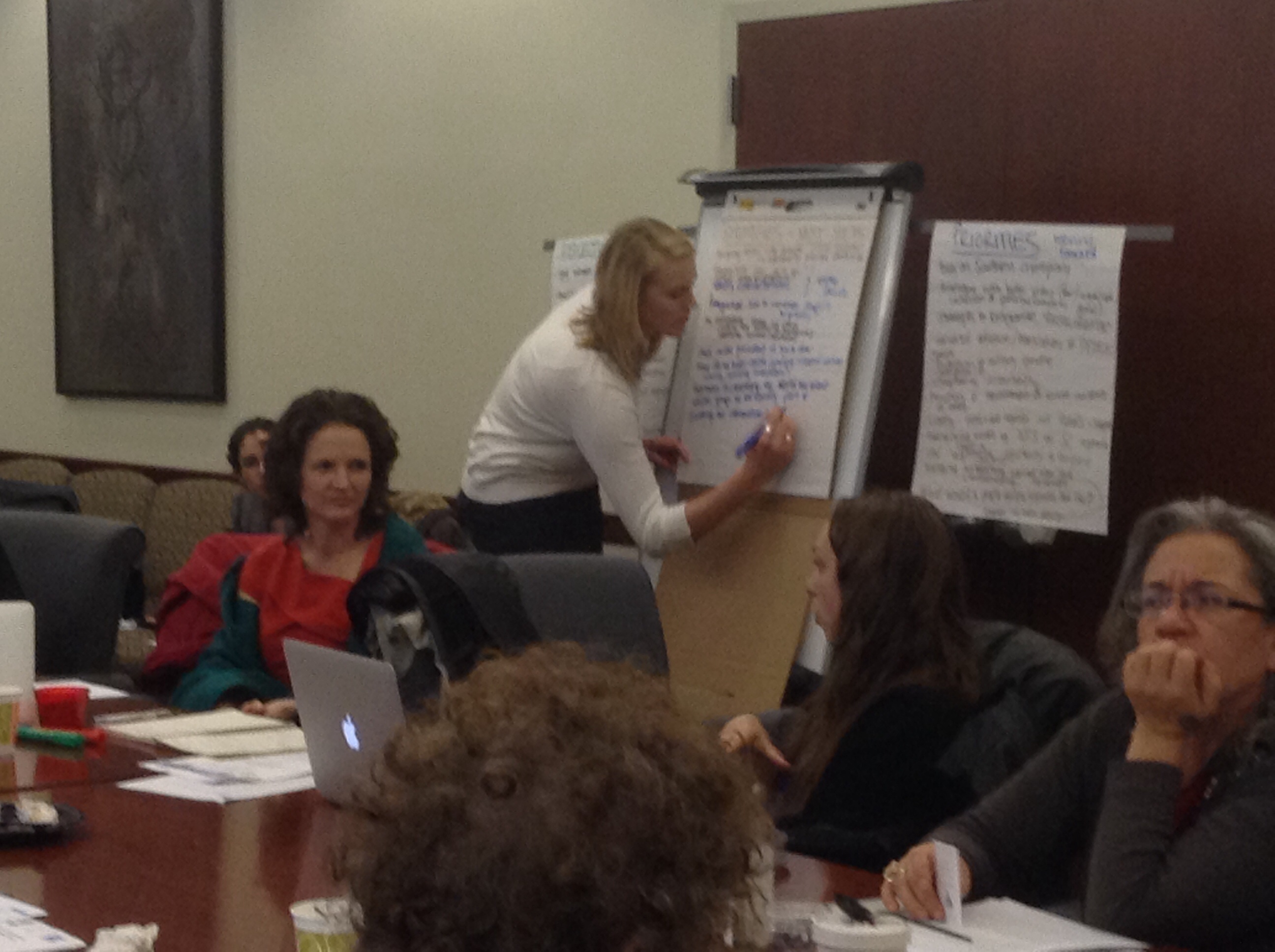 On April 24-25th, WILPF advocated for a conflict prevention approach to development that promotes gender equality in the UN President of the General Assembly (PGA) debate on stable and peaceful societies in the Post-2015 development agenda. This debate is part of ongoing discussions around creating a new set of Sustainable Development Goals (SDGs) for when the Millennium Development Goals (MDGs) expire in 2015.

WILPF co-sponsored a strategy meeting on strengthening peace through development. Participants called for an integrated approach to peace and development, including through a stand-alone SDG on stable and peaceful societies and that peace is mainstreamed throughout the targets and indicators of all other goals. WILPF highlighted how a target reducing military spending and an approach that builds on existing commitments including the Women Peace and Security (WPS) agenda would be critical for a universal agenda that addresses root causes of conflict in militarized inequality and promotes development and peace.

WILPF also worked with the Post-2015 Women's Coalition, Women's Major Group and Global Network of Women Peacebuilders to support three women peace leaders from Colombia, Sudan, and Fiji to participate in the official debate. The women's leaders called strongly for the international community to invest in gender equality and peace through SDGs targets including reducing military spending, so as to reduce violence and free up resources for gender equality and peace. Rosa Emilia Salamanca from Colombia provided a powerful keynote speech and called for gender equitable peace and development that women's human rights defenders can “can see and feel.” Sharon Bhagwan Rolls from Fiji highlighted the importance of development that promotes human security and builds on women's experiences. Nagwa Gadahweldam from Sudan demanded that the next development agenda “transform modes of exploitation to regeneration” and promote gender equality, development and peace.

Please ask your government to design development for peace! Demand a target reducing military spending, and ask for peace to be prioritized through a stand-alone goal and mainstreamed targets and indicators throughout all other goals. For more information, read the blog on the WILPF International website here.

“Sexual violence is not just a UN issue, but requires the leadership, national ownership and responsibility of States.” - Rwandan Mission to the United Nations 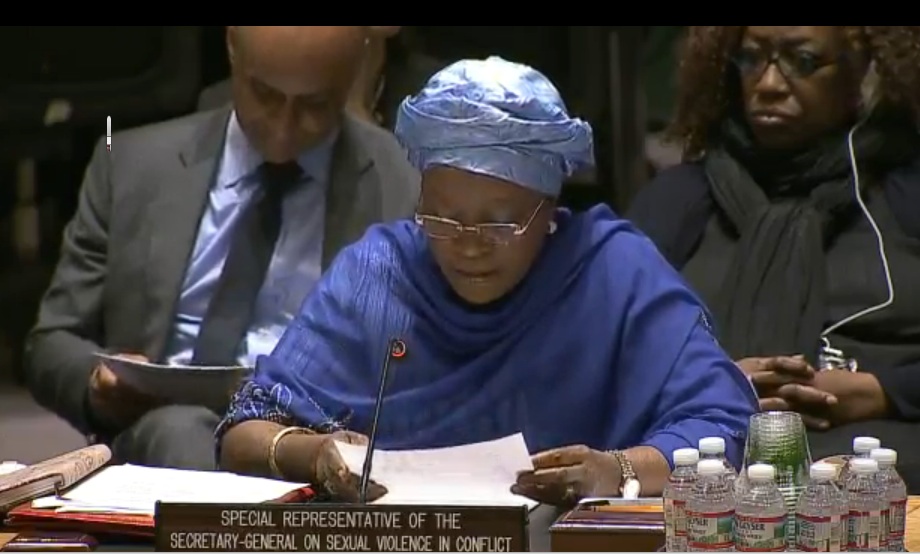 On April 25th, the United Nations (UN) Security Council held an Open Debate on Sexual Violence in Conflict under the presidency of Nigeria. Secretary-General Ban Ki-moon and the Special Representative of the Secretary-General on Sexual Violence in Conflict Zainab Hawa Bangura briefed the Council and Rhoda Misaka spoke on behalf of the NGO Working Group on Women, Peace and Security.

Reflecting the high level of interest in this issue, more than sixty Member States, in addition to the African Union and the European Union, addressed the Council. No outcome document was adopted from the debate. Many speakers noted that positive progress has been made in addressing sexual violence in recent years, but also said that existing Security Council resolutions on Women, Peace, and Security agenda must be translated into concrete action. Situations in South Sudan, Syria and the Democratic Republic of the Congo were frequently mentioned by speakers. Click here for the full summary and analysis of the debate. 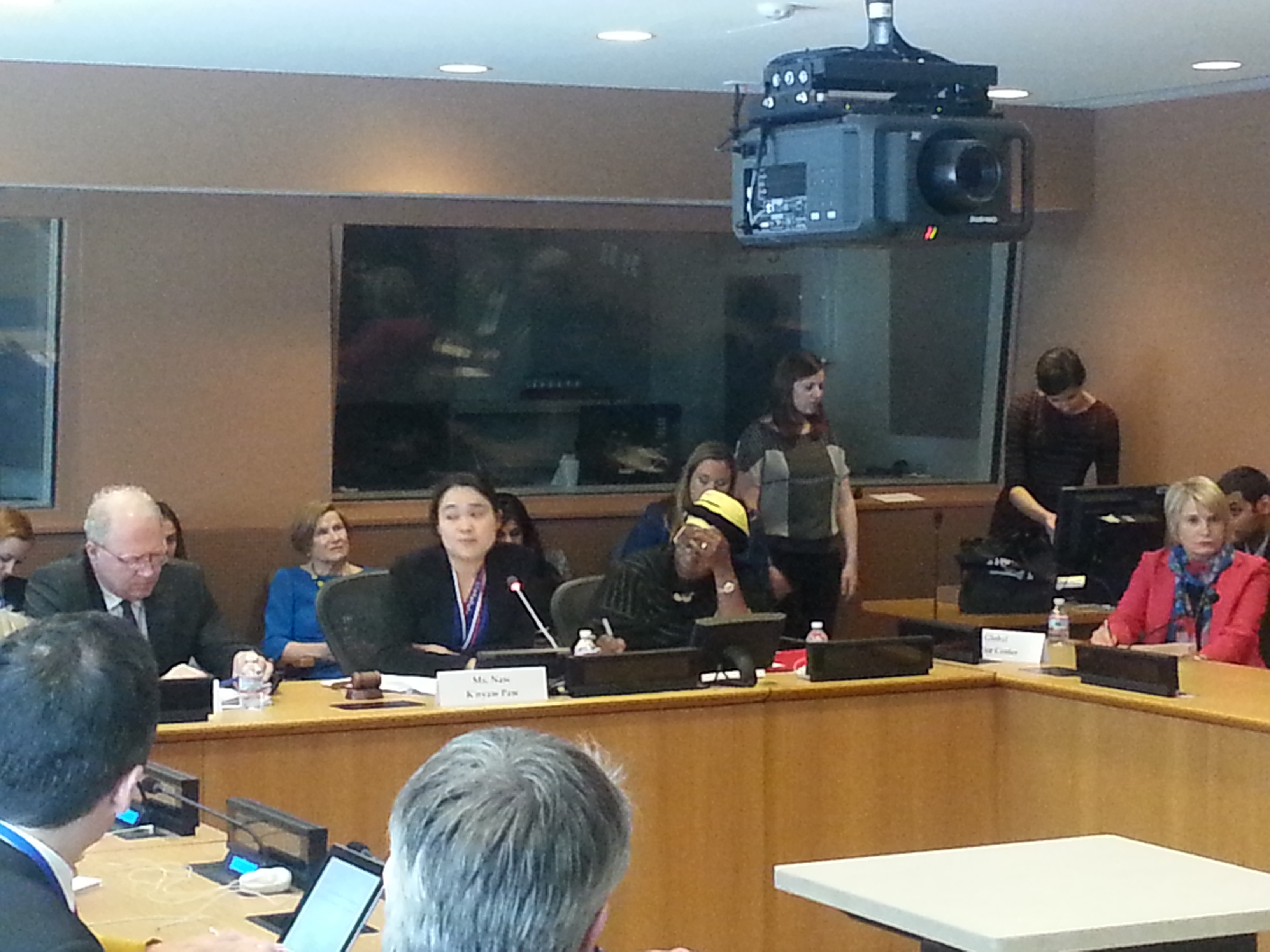 On April 24, PeaceWomen attended and supported (as part of our Women, Peace and Security (WPS) Coalition) an important side-event to the Security Council's annual Open Debate on conflict-related sexual violence, which focused on the continuing sexual violence committed by the military against ethnic women in Burma. Naw K'nyaw Paw, Secretary of the Karen Women's Organization, presented reports on sexual violence and underlined the links with the exclusion of women from the national ceasefire talks. Ms. Paw called directly for international investigation of the use of rape and sexual violence in Burma and for women to be included in the political processes. She highlighted to the audience of international advocates and policymakers that “sexual violence is a deeply neglected issue, which is too often covered under a veil of silence in Burma in order to not ‘threaten' any reforms or progress.” Underlining the links with militarism in Burma, Janet Benshoof, President of the Global Justice Center, stated that “without amending the Constitution to bring the military under the control of the civilian government, the women of Burma will continue to suffer.” The Ambassador of Ireland to UN and the Special Representative of the Secretary-General on Sexual Violence in Conflict Zainab Hawa Bangura also participated. The event was co-hosted by the Nobel Women's Initiative, the Global Justice Center, Amnesty International and the NGO Working Group on Women, Peace and Security. On April 25 at the Open Debate of the Security Council, it was powerful to have the NGO Civil Society speaker from South Sudan, Rhoda Misaka acknowledge Naw K'nyaw Paw from Burma as another women's human rights defender in the room. Some Member States and some UN officials pushed back on having a speaker from Burma in the Open Debate. However, her participation in the side event brought much needed attention to addressing sexual violence in forgotten conflicts and every region of the world.

Read more about the recent events highlighting the issue of sexual violence in the Global Justice Center Press Release.