Security Council Open Debate on Sexual Violence in Conflict: Towards a survivor-centred approach?

For WILPF’s full analysis of this year’s Open Debate on Sexual Violence in Conflict, the Concept Note, SRSG Report, and the statement of Ms. Inas Miloud, see our website.

On 23 April 2019, under the German presidency, the UN Security Council held the annual Open Debate on Sexual Violence in Conflict (SVIC). The debate focused on the themes of accountability for sexual violence and survivor-centred approaches.

During the debate, the Council was briefed by a civil society speaker, Ms. Inas Miloud, who spoke on behalf of the Tamazight Women’s Movement, (an indigenous rights organisation in Libya) and the NGO Working Group on Women, Peace and Security. Ms. Miloud powerfully called on the Security Council to take action to demand a ceasefire, stop weapons sales , and accelerate an inclusive peace process in Libya. She shared how the revolution in Libya changed her life and how violence impacts her and women like her. Inas called out the disengagement between ordinary Libyans and the UN-led peace process, stating, “You cannot build peace without building trust with our communities and having meaningful consultation with civil society”.

The Council was briefed by several other prominent speakers, including UN Secretary-General António Guterres, the Special Representative of the Secretary General (SRSG) on Conflict-Related Sexual Violence, Pramila Patten, Nobel Laureates Dr. Denis Mukwege and Nadia Murad, and international human rights lawyer, Ms. Amal Clooney.  Nadia Murad, a survivor, called for justice for crimes perpetrated against Yazidis. Pramila Patten demanded accountability and justice, including reparations for survivors as part of international law. In her remarks she stated the reality that “Wars are still being fought on and over the bodies of women and girls”. 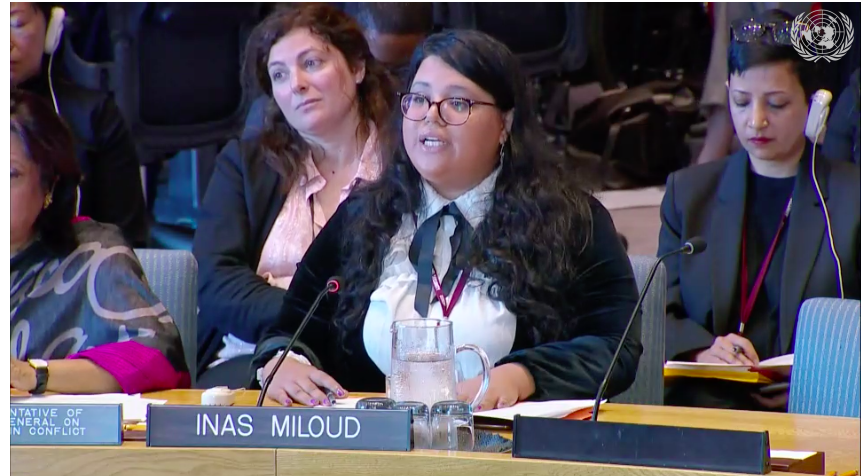 The debate culminated in the passage of UN Security Council Resolution 2467, the 9th resolution on WPS, which focuses on accountability and a survivor-centred approach related to sexual violence in conflict. The resolution was adopted with 13 votes in favor and abstentions from Russia and China.

The negotiations over the Resolution were fraught. German civil society organisations who work with front-line defenders came out with a public statement in advance of the debate, arguing that if negotiations suggested a resolution would weaken the WPS agenda, it should not be introduced in the Council.

Inas Miloud, Co-Founder and Director of the Tamazight Women’s Movement in Libya, addressing the UN Security Council on 23 April 2019.

The most difficult issues in the negotiations were language on whether to establish a mechanism (i.e. a formal working group of the UN Security Council) on sexual violence in conflict and on sexual and reproductive health and rights (SRHR) of victims of sexual violence.  It is understood that concerns were raised about a formal mechanism by several actors and groups. During negotiation, States, in particular, Russia, China, and the US opposed the mechanism, so therefore no new working group was established. In the final stages, the US proposed compromise language to proposed language on SRHR, but the final text ended up making no direct reference to SRHR. Although this leaves languge in SCR2106 OP19 as precedent language, the absense of this committment in the context of growing attacks on women's rights indeed still sets a bad precedent.

Following the passage of the resolution, France, Belgium, South Africa, and the United Kingdom spoke about the importance of sexual and reproductive health and rights (SRHR) for survivors. South Africa stated that “text calls for survivor-centred approach, while denying survivors SRH services when they need them most. The Security Council is therefore telling survivors that consensus is more important than their needs”. Indeed, moving forward, a holistic, survivor-centred approach must include appropriate multisectoral services for all survivors of sexual violence, such as clinical treatment of rape, medical, psychosocial and legal services, including comprehensive sexual and reproductive health care and rights such as access to emergency contraception, safe termination of pregnancy, and HIV prevention and treatment.

UNSCR 2467 did introduce new language on a survivor-centred approach to sexual violence, which called for prevention and response to be non-discriminatory and specific, and respect the rights and needs of survivors including vulnerable or targeted groups (OP16)). Despite backtracking on SRHR, this may create opportunities, along with other tools,  for women-led civil society and those working with survivors, to demand increased action by Member States. The Resolution does ask for a gap assessment and recommendations by the Secretary-General in his next report (2020). It is essential that survivors, women-led civil society and service providers are part of the design of this assessment.

The Open Debate reflected several key themes. 28% of Member States underscored gender inequality as the root cause for sexual violence in conflict, and there was demonstrated recognition of violence as a continuum, especially against women and girls, as well as against men and boys. There was an increased focus on reparations to survivors of sexual violence, including economic empowerment and services. States also recognised the importance of civil society, including civil society briefers. A number of Member States also reaffirmed the importance of international law and the International Criminal Court in potentially addressing crimes of sexual violence in conflict settings.

For our full analysis of the Debate, see our website.

Pledge of Commitments on Women, Peace and Security: High Level Event Preparing for the 20th Anniversary of UNSCR 1325 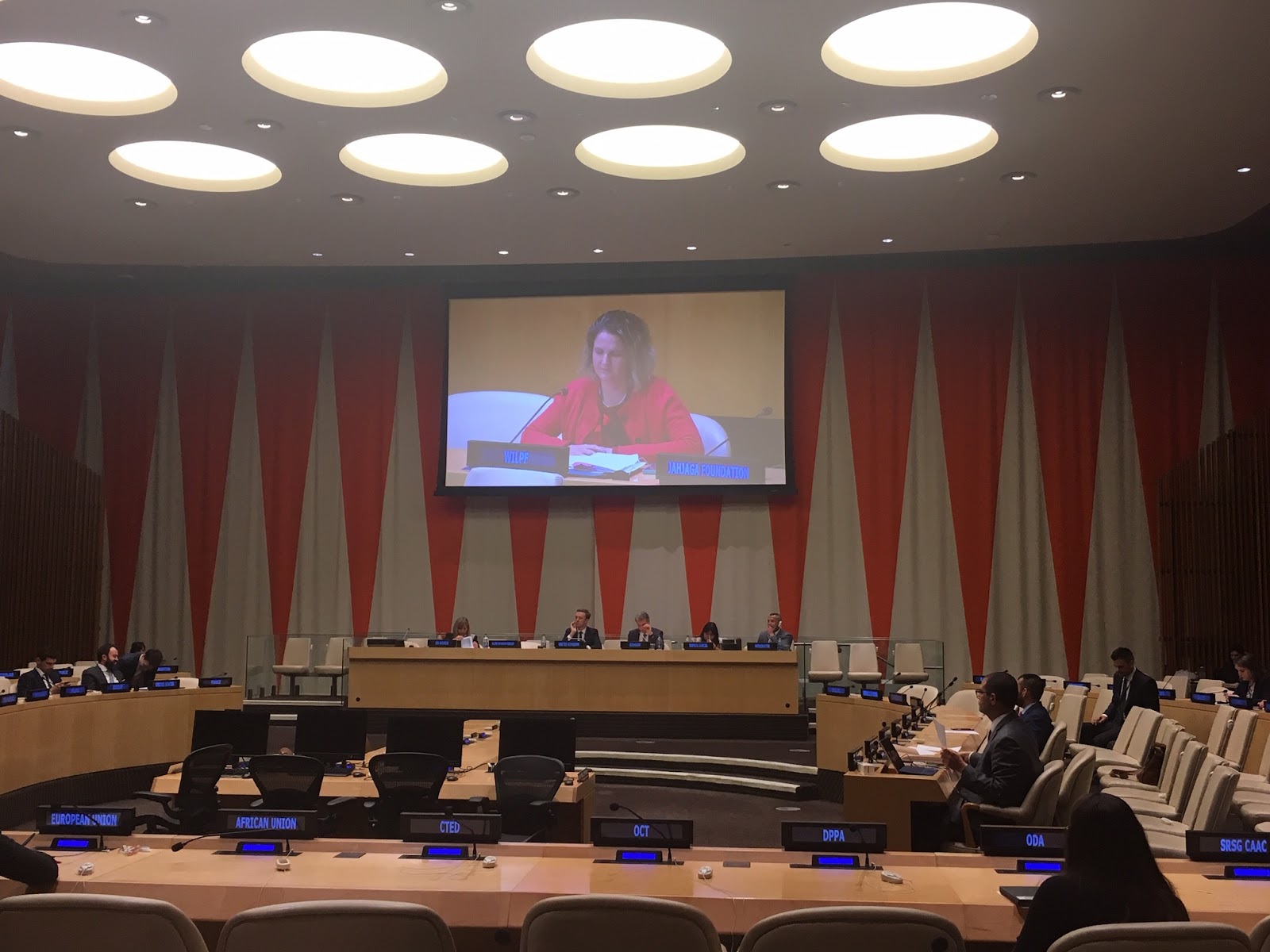 On 23 April 2019, Germany, the United Kingdom, and UN Women co-hosted a high level WPS commitments pledging side event. The commitments were to be time-bound between April 2019 and October 2020.

Key themes for commitments included: National Action Plan (NAP) creation and implementation; participation from women and civil society; training programmes for various stakeholders; reforms to domestic policy regarding the status of women; conflict-related sexual violence; and women in peacekeeping, police, and the military. WILPF made an intervention directly calling on States to address root causes and make concrete, ongoing, financially-supported, and consistent commitments - not just projects.

As with 2010 and 2015 commitments, we will be holding States accountable to the commitments made and will ensure follow-up. The full list of commitments will be shared by UN Women in the coming months.

For our full analysis of the commitments event, visit our website.