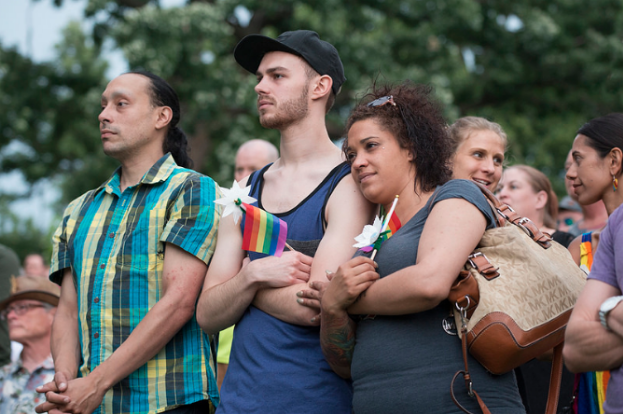 In November 2015 the world stood together in solidarity in the face of the Paris and Beirut attacks. Since that time, shootings have occurred around the world, including in Brussels, Nairobi, and Kabul. On 12 June, another tragedy occurred in the United States: a shooter killed 49 and injured at least 53 with an assault rifle in an act of terror and violence against the LGBTQI community at a gay bar during Latin Night and LGBTQI pride month in Orlando, Florida.

As our hearts go out to and grieve with the survivors of the biggest mass shooting in US history, it is difficult not to feel baffled, aghast, and outraged at both the context and response to this violence.

In a world of homophobia, Islamophobia, and rape culture, why is it that the responses are so disconnected from these root causes of violence? Why do we ignore how systems of domination and fear perpetuate domination, exploitation, and violence?

Why do we put the spotlight on security responses rather than recognising and supporting the human security of at-risk communities in their priorities and call for action?

The Orlando attack targeting the LGBTQI community cannot be separated from homophobic and misogynistic discourse more broadly in America today. Some commentators havereflected that, “hate has become the new normal.” In a situation where the attacker pledged support for ISIL/Daesh during LGTQI pride month, we also cannot forget that ISIL/Daesh’s philosophy is founded on gendered exploitation. ISIL/Daesh summarily executes and throws LGBTQI people from rooftops, and maintains systematic sexual slavery using unlike anything seen in recent history.

Guns are part of a culture of violent masculinity and systems of gendered terror and violence, which impacts both locally and globally. Yet, despite overwhelming support by the American citizens for greater domestic regulation, a political economy of war continues, and it does not just impact America: it impacts all of us, wherever we are in the world. From Newtown to Orlando, from Iraq to Syria, you get what you pay for – and we are putting our money into tears, blood, and war. Not only that, but we are putting our money into terrorising communities who love differently, who do not submit to traditional gender normative roles, who dare to stand up claim their rights, and love as they see fit.

This is undemocratic, corrupt, and unconscionable.

It is time to take action in solidarity with the LGBTQI community in Orlando and around the world. It is time to reject militarism as a failed method of conflict resolution. It is time toget rid of the guns and arms in our homes, countries, and world and reclaim our human security.

Take a stand! Let us mobilise together and demand action.

Inside the Open Debate on Sexual Violence in Conflict 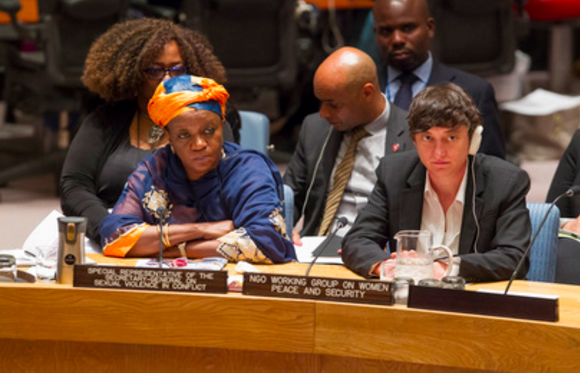 Zainab Bangura (the Secretary-General’s Special Representative on Sexual Violence in Conflict) and Lisa Davis (of the NGO Working Group on Women, Peace and Security) (Photo: UN)

On 2 June, 2016, under the French presidency, the Security Council held a ministerial-level open debate under the theme, "Women, Peace and Security: Responding to human trafficking in situations of conflict-related sexual violence." Noting that sexual violence is increasingly evolving from a tactic of war to one of terrorism, participants highlighted the growing use by terrorist and extremist organisations of sexual violence to control and intimidate communities, recruit and maintain fighters and force people from their homes.

WILPF/PeaceWomen, along with other members of the NGO Working Group on Women, Peace and Security, supported the civil society statement presented by Lisa Davis of MADRE. Davis noted that gender-based violence is perpetrated by both combatants and non-combatants, including intimate partners, family members, state agents, and civilians and humanitarian aid staff; further, gender-based violence is part of a continuum of violence across societies, in which gender inequality is the societal and legislative norm. “We cannot emphasize enough the urgent need to curb the flow of guns and other weapons, which exacerbate levels of sexual and gender based violence,” she stated. 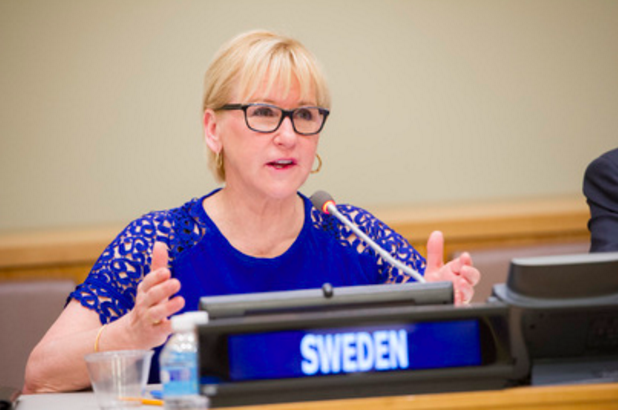 The government of Sweden launched its third revised National Action Plan in May. The revised NAP follows Sweden’s commitment in 2015 to  feminist foreign policy which, as Sweden’s Foreign Minister Margot Wallström has declared, is about ‘rights, representation and resources’.

The 2016 NAP, which supersedes the 2006 and 2009 NAPs, builds on a strong inclusive process involving civil society organisations including WILPF. It also includes a new “conflict prevention” goal, which was a gap in previous NAPs. However, some key aspects are still missing; financing is still lacking as there is no earmarked budget, and the language around disarmament is weak and ambiguous.

Despite these shortcomings ongoing need for future measures of financing to be addressed, WILPF Sweden found in its analysis that the NAP is a step in the right direction. It’s clear Sweden’s newest NAP is a huge win for feminists. In the wake of its release  – and Canadian Prime Minister Trudeau’s recent decision to join his voice to feminist policy – we now hope others will follow suit. 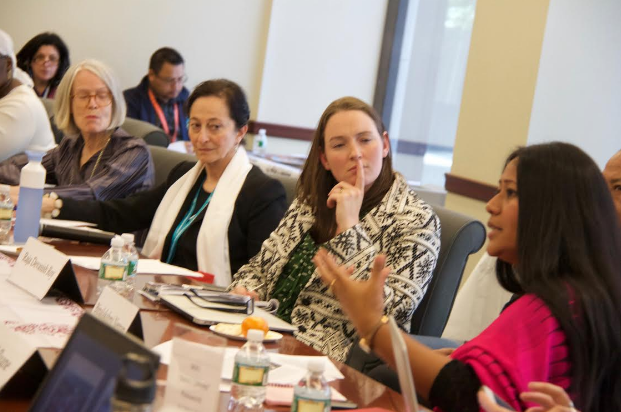 The discussion centered around possibilities for linking the Women, Peace and Security (WPS) movement and the indigenous rights movements together.  The panel addressed challenges and historical connections put forth recommendations for future work. Nepram spoke of her work with the Manipur Women Gun Survivors Network, and more broadly of the struggle faced by the women of Manipur, a state in northeastern India. She introduced the audience to the concept of “household disarmament,” in which the women of the community keep weapons out of their houses. “We the women know where the weapons are and know what it means to disarm a society,” she said.

Ms Nepram and Ms Stamatopoulou called for further integrated work between the women’s peace movement and the indigenous people’s movement. As Ms Stamatopoulou pointed out, more work at the nexus of these movements would be “a powerful step.” Ms Nepram also spoke of how non-violent protest can be more powerful and frightening to the powers-that-be than violence. “A gun in a crutch, not a sign of strength,” she declared. “When unarmed people rise up is when the world starts to get afraid.” 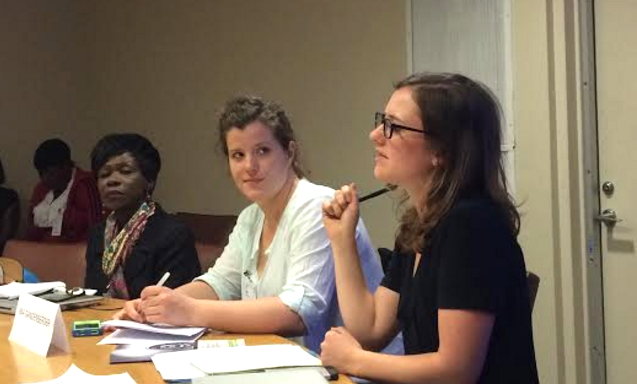 On 6 June, WILPF launched a report, “Preventing Gender Based Violence Through Arms Control,” as a side event to the Sixth Biennial Meeting of States (BMS6).

The report discusses tools and guidelines for effective implementation of the Arms Trade Treaty (ATT) and the UN Programme of Action on Small Arms and Light Weapons (UNPoA) provisions related to gender-based violence (GBV). It builds on WILPF’s advocacy work in pushing gender criterion in the ATT. It offers an overview of current practices in export license, documentation, risk assessment, information-sharing, monitoring and transparency. It further analyses current practice and thus offers guidelines for assessing GBV. Building on WILPF’s successful advocacy to push for the ATT and its gender criterion, which commits states to assessing the risk of GBV of arms transfers, WILPF’s recent report shows how this commitment can be turned into action.

The speakers– report author Rebecca Gerome, along with Mia Gandenberger of WILPF/Reaching Critical Will programme and Marren Akatsa-Bukachi of the IANSA Women’s Network– presented the key findings in the report and addressed the link between gender and disarmament.

They highlighted how GBV is rooted in violent masculinities and gendered and unequal power relations. They showed how inconsistent requirements of states conducting risk assessments, and lack of expertise in GBV by arms export officials were among the obstacles to effective implementation of the ATT. They also called for ongoing consultation with women’s and civil society to ensure gender mainstreaming into the implementation of the UNPoA.

Read our full report on the launch here. You can also read the Swedish case study on arms trade and feminist foreign policy made in collaboration between international staff and grassroots activists in arms exporting here.

An Analysis of Chapter Six of the Global Study: Keeping the Peace in an Increasingly Militarised World. 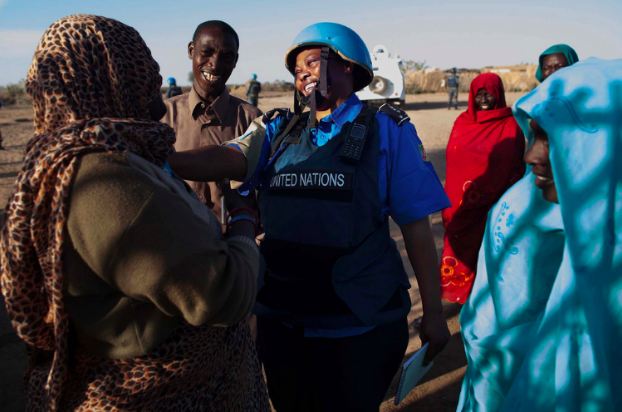 Chapter six of the Global Study addresses challenges of militarism for peace. It recognises the importance of reducing military action in conflict zones, and offers recommendations for protecting and building the capacity of women female peacekeepers when deployment takes place. Chapter six focuses on how female participation can reduce instances of armed violence and sexual abuse, and promote sustained peace in conflict zones. While more women have entered peacekeeping operations since the advent of UNSCR 1325,  women still comprise less than 3% of overall UN Missions, and often serve in support or clerical capacities (Global Study, 2015, 139).

Below are some of the main highlights and recommendations from this chapter in the Global Study.