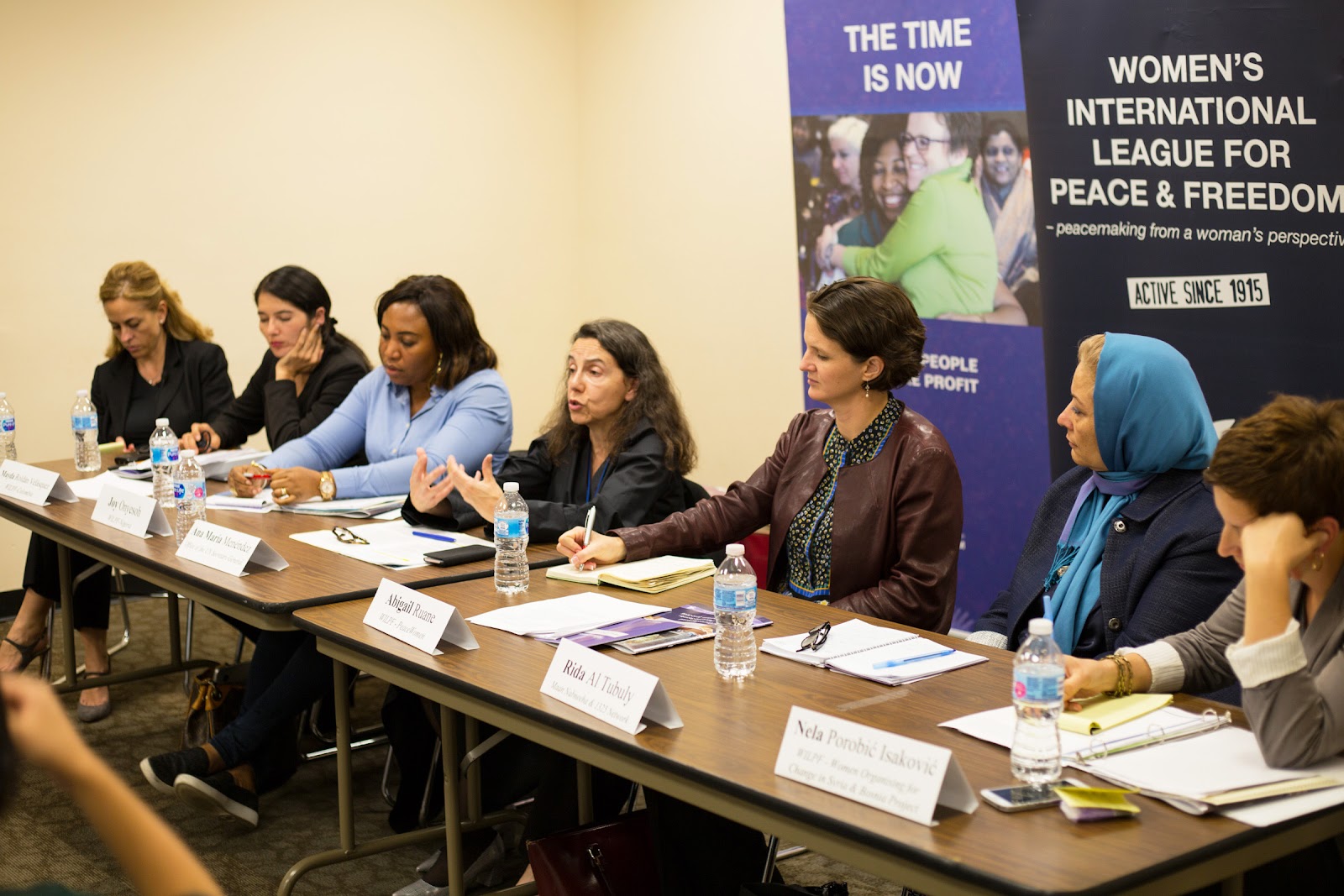 On 23 October 2016, the Women’s International League for Peace and Freedom hosted an event on “Sustaining Feminist Peace: Preventing Conflict Through Women’s Meaningful Participation and Gender Justice” with UN Senior Adviser on Policy Ana Maria Menendez and women peace leaders from Bosnia, Colombia, Libya and Nigeria. This event provided a forum for women-led civil society to share recommendations on conflict prevention and sustaining peace, which have been identified by UN Secretary-General Guterres as key priorities, and explore what a Sustaining Feminist Peace Agenda could look like.

WILPF’s Women, Peace and Security Programme Director, Abigail Ruane, began the conversation by reiterating that UN Security Council Resolution 1325 is a pioneering commitment that recognised the importance of women and gender issues to peace and security. “The UN Security Council is now responsible for maintaining peace and security in accordance with the principles of the United Nations, including women's equal rights and prevention of war.”, she reiterated. Yet because the militarised logic still prevails inside and outside of the Council, no country in the world is a country without conflict for women. As WILPF’s 2017 Security Council WPS Scorecard shows, strengthening women’s meaningful participation, conflict prevention and disarmament are critical areas to address for achieving feminist peace and ensuring women’s meaningful participation.

United Nations Senior Adviser on Policy, Ana Maria Menéndez, continued the conversation. She explained that women’s civil society organisations have long carried the message of peace, influencing the adoption of UNSCR1325 and the Women, Peace and Security in general. She also highlighted that the elements of the Women, Peace and Security framework are now integrated across the UN work. The Sustaining Peace Agenda, for example, provides an opportunity to accelerate implementation of a transformative understanding of UNSCR 1325 (2000) and the Women, Peace and Security (WPS) Agenda by mobilising gender power analysis and gender inclusive partnerships across the UN system. But to this day, women’s capabilities in peacebuilding remain underutilised and underfunded, especially when it comes to disarmament. Responding to the concerns of civil society, she stressed that budget cuts on gender expertise in peace operations do not constitute an effective way of prioritising investments within the UN system. Menéndez pointed out that there is still very little gender expertise and understanding of the role of women in disarmament and peacekeeping work. Without this expertise, sustaining feminist peace is impossible.

The Regional Coordinator of WILPF Colombia’s Meta Branch, Mayda Roldan Velasquez, described her work and outlined key elements of sustaining feminist peace from the Colombian experience. She suggested that peace is a process, and any progress towards achieving peace requires more than just signing the Final Peace Agreement. Structural problems within society require specific attention. These cannot be addressed by simply removing arms from societies; many areas remain neglected, guarantors and administrators of peace lack social and political purpose, and corruption continues to limit the progress of the society and its transformation. Therefore, it is not enough for the FARC-EP to lay down their arms; it is necessary that both the state and the population undergo total and complete disarmament, changing the current power relations and disarming their bodies, language and vision.

The Vice President of WILPF International and President of WILPF Nigeria, Joy Ada Onyesoh, talked about how incidents of violence increase around election time in Nigeria and how her women’s organisation leverages its position as election monitors to further women’s political participation. One such example is the 2015 Women’s Situation Room (WSR) which aimed to create an early warning and early response mechanism for electoral violence surrounding the March 2015 general elections. The WSR successfully responded to a number of incidents of election-related violence, making it a strong example of the feminist movement’s power to assist in countering violence against women. However, she clearly stated that it is not enough to ensure that violence around elections is addressed in a gender-sensitive manner. Onyesoh also spoke about the importance of women’s participation in elections and in politics for further building an enabling environment for feminist peace. She explained that WILPF is currently working to navigate women’s participation from informal spaces to formal spaces across the globe, including in Nigeria.

The coordinator of WILPF’s Women Organizing for Change in Bosnia initiative, Nela Porobić Isaković, spoke about the importance of building political economies of peace in post-conflict settings using an example of her country, Bosnia.  She explained that gender- and conflict-blind economic reforms sustain conditions that allow for conflict relapse. Even though it has been 22 years since the conflict has ended, it is more of an absence of militarised violence than the presence of sustainable peace in Bosnia. WILPF’s analysis highlights the importance of a two-track approach to post-conflict reconstruction which includes: 1) providing gender-sensitive reparations for the harms suffered by civilians and 2) guaranteeing strong social institutions and an economy for peace that guarantees women’s economic, social and cultural rights. Since reparations alone can not guarantee rights across the board, and institutions alone do not ensure justice, both are needed. In the case of Bosnia, inadequate response to address these issues has led to substantial challenges. Although some reparations have been provided on a case-by-case basis, the government has not delivered comprehensive gender-sensitive reparations to this day. The current conflict and gender-blind reform agenda have no capacity to change the deeply-embedded root causes of gender inequality and conflict.

In general, participants, as well as panellists, have agreed that sustainable and feminist peace will enable effective conflict prevention through women’s meaningful participation, disarmament and providing effective conditions to women’s empowerment. For the UN Security Council, the body responsible for maintenance of international peace and security, achieving feminist peace would mean listening to local women and using this information so as to better understand the root causes of conflict, enable space for feminist change and adopt necessary policies. Local women peace activists and women human rights defenders can give real input, analysis and information and be connected so actions are responsive to the diverse needs, rights and requirements of the people. At the 17th anniversary of UN Security Council Resolution 1325, the time is now to invest in women’s meaningful participation for a holistic action on the WPS Agenda. There are many different good practice opportunities for taking action. Now is the time to step up.