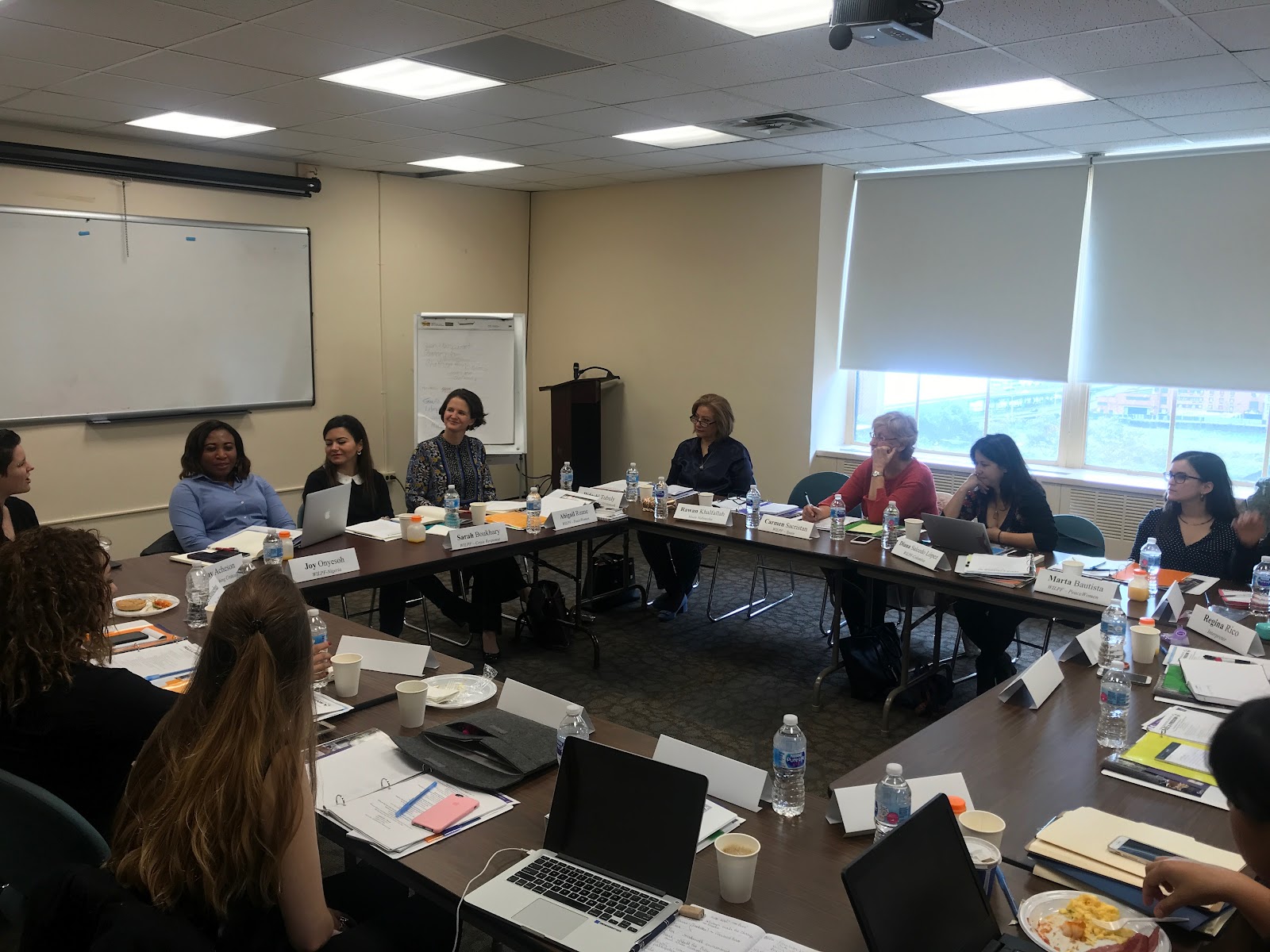 Participants came together and affirmed feminist power to insist, persist, resist and disrupt existing international systems to create a truly sustainable and feminist peace. They identified feminist peace as a vision of the society where peace is sustainable and where women, as well as everyone, can enjoy their citizenship and rights under conditions of non-violence, complete demilitarisation, equality and justice.

Together, they exchanged experiences and learning around WILPF's new strategy and feminist pacifist work around the world. Discussions started with a recognition of WILPF’s work around stigmatising war and violence. As a member of International Campaign to Abolish Nuclear Weapons (ICAN)’s steering committee, WILPF has been a lead contributor to the campaign, which recently was awarded a Nobel Prize for work leading to the successful July 2017 treaty banning nuclear weapons. The campaign illustrated how international spaces that are not welcoming to women or peace can be occupied and made to work for transformative purposes. In this context, women peace leaders of the anti-nuclear movement in this context recognised that the old approach was not working. They took initiative to change the story and bring attention to the humanitarian impact of arms. They cultivated champions who made the discussion snowball, and now it is clear that history is on their side.  “If it has been done with nukes, it can be done with other weapons”, said one of the participants. Learning from the example of the nuclear ban, participants agreed that, women peace leaders need to continue to occupy spaces of power and change the story based on women’s lives and experiences. Starting from the bottom up and supporting non-violent efforts is critical to transforming gendered power in a way that challenges militarised thinking, exposes the epidemic of war and violence and builds human security that works for women from Colombia to Libya to Palestine.

Participants also explored strategies on global and national advocacy, movement building, regionalisation and twinning/sister-section support. Providing country-specific focus, representatives from Colombia spoke about the challenges that are connected with sustaining peace in Colombia. Although the peace agreement has been signed and there are more than 100 provisions on gender contained therein, ongoing challenges remain to realise the potential of the peace agreement in practice. Ensuring women’s participation and rights in the implementation phase is particularly critical given that these issues are typically first to be cut and last to be prioritised. An enabling environment for women’s rights and peace requires demilitarisation and disarmament, which are an urgent issue for Colombia. While the FARC-EP has laid down around 10000 arms in accordance with the peace agreement, there are thousands more legally- and illegally-obtained small arms throughout the country that still pose a serious threat to women’s livelihoods and security. WILPF Colombia has recently launched a campaign “+Vida, -Armas” (“More Life, Less Arms”), which documents the violence promoted by arms proliferation and calls not just for the disarmament of the FARC-EP, but for the disarmament of society as a whole. Eradicating arms and overcoming systems of machismo and violence will be critical to ensuring women’s meaningful participation and rights and sustaining ongoing peace.

Transforming gendered power requires not only moving away from militarism and war but creating economies of peace by prioritising gender equality and socio-economic justice to achieve economic prosperity and sustainable and just peace in conflict-affected societies. From the experience in Bosnia, participants demonstrated how economic reforms that are gender- and conflict-blind sustain conditions that allow for conflict relapse. Even though it has been 22 years since the conflict has ended, it is more of an absence of militarised violence than the presence of sustainable peace in Bosnia. WILPF’s analysis highlights the importance of a two-track approach to post-conflict reconstruction which includes: 1) providing gender-sensitive reparations for the harms suffered by civilians and 2) guaranteeing strong social institutions and an economy for peace that guarantees women’s economic, social and cultural rights. Since reparations alone cannot guarantee rights across the board, and institutions alone do not ensure justice, both are needed. In the case of Bosnia, inadequate response to address these issues has led to substantial challenges. Although some reparations have been provided on a case-by-case basis, the government has not delivered comprehensive gender-sensitive reparations to this day. The current conflict and gender-blind reform agenda have no capacity to change the deeply-embedded root causes of gender inequality and conflict.

Finally, participants spoke to the need to strengthen the conditions for women’s meaningful participation in the society. In Nigeria, women are mobilising to prevent and address violence both around and outside of elections, as well as build networks that are responsive to women’s security needs and strengthen women’s political participation. One such example is the 2015 Women’s Situation Room (WSR) which aimed to create an early warning and early response mechanism for electoral violence surrounding the March 2015 general elections. The WSR successfully responded to a number of incidents of election-related violence, making it a strong example of the feminist movement’s power to assist in countering violence against women. In Palestine, women are building other women’s technical skills and raising awareness of women’s rights. In Iraq, women are taking action in the face of high levels of personal insecurity, including risk of being kidnapped, tortured and raped; they are working with the government to improve accountability on gendered violence, strengthen the government's crisis response and their recovery plan and create an enabling environment that addresses the militarised environment and develops concrete mechanisms to increase women’s participation at all levels. In Libya, women are refusing to be stopped in the face of shrinking civil society space, including attacks which mischaracterise them as liberal agents; they continue to raise awareness of rights and advocate for political change including through the development of a UNSCR 1325 National Action Plan.

To effectively mobilise feminist movements for peace, participants agreed that it is important to both create feminist spaces and broaden outreach to connect with a wider audience. This requires both feminist convenings and broader outreach strategies to amplify the impact of these spaces, including through distribution of information in local languages and support for local organisations in their interpretation and engagement with local stakeholders. Participants also suggested that civil society convenings and information exchange help the feminist movement to learn from each other and adopt practices that are proven to work to local specific contexts. Connecting with women human right defenders and feminist peace activists in spaces like this workshop and throughout the week to exchange learning on good practices and opportunities in addressing ongoing obstacles, as well as standing in solidarity with sisters in their work for feminist peace is critical to moving the agenda forward.

Sustainable Peace Workshop.pdf
BACK
TO TOP