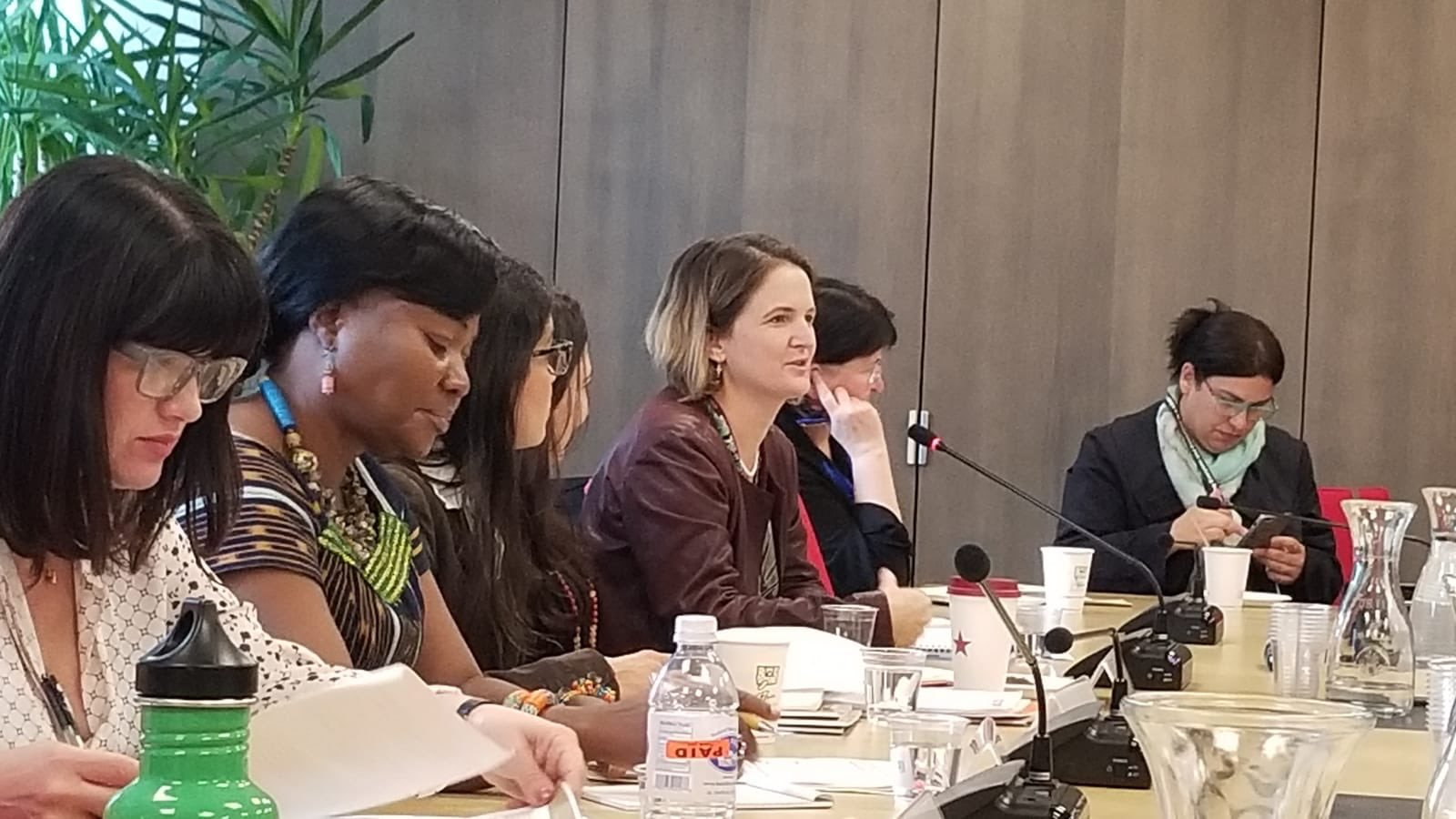 On 24 October 2018 the Women’s International League for Peace and Freedom (WILPF) and the Permanent Mission of Switzerland to the United Nations hosted a panel discussion on strengthening women’s meaningful participation around elections processes, from civil society to political positions to peace processes. Although there is much attention to women’s participation in the Women, Peace and Security Agenda, action tends to be disjointed and project based. This panel discussion provided a forum to explore how to interlink action on women’s meaningful participation around elections processes.

Women peace leaders working around Afghanistan, Cameroon, Colombia and Syria explored how violence and discrimination prevent all forms of women’s participation -- from civil society activism to women’s participation as voters to political candidates. They identified elections as a mobilising space to catalyse women’s leadership.

From the perspective of her work in Cameroon, Sylvie Ndongmo, the President of WILPF’s Cameroon section, shared about her work to address electoral violence by building partnerships between women civil society leaders and local authorities through the Cameroon Women for Peaceful Elections. “Most things that go wrong during elections go wrong far beyond election day,”  stated Ndongmo. “The UN must work for conflict prevention, not just build a conflict management force.” Ndongmo shared her experience in training electoral observers on electoral violence. She highlighted how cultivating women’s leadership around elections through the Cameroon Women for Peaceful Elections has long-term effects, since many women incorporate their experience into both serving as peace ambassadors in their local communities and developing other initiatives. “We want to let women and youth know the importance of their own votes,” stated Ndongmo.

Katherine Ronderos, Director of WILPF Colombia, provided a perspective from working with women to ensure that the peace process in Colombia is gender sensitive, and the follow-up is active and effective. The women’s movement in Colombia was critical to the creation of the historic peace agreement. However, the elections process in Colombia has resulted in a government that is currently undermining implementation of the peace agreement, with the gender provisions particularly at risk. In addition, there has been a surge in killings of human rights defenders since the signing of the peace agreement. “The idea that you sign a peace agreement and the next day it works is a lie,” Ronderos stated. “The real peace is after the signing of the peace agreement.” Greater support is needed by the international community to push for accountability and protect the defenders who are putting their lives on the line to push for agreement implementation and call for “more life and less arms.”

Mina’s List Founder Tanya Henderson affirmed the courage and leadership of women political candidates who recently ran in Afghanistan’s October 2018 parliamentary elections  despite intransigent obstacles. Women civil society often have the gender expertise and vision needed for political change, while people in traditional spaces of power often are not women and do not have that gender perspective. Recognising this, Mina’s List has worked extensively with women civil society leaders to support them in running for political office with substantive women rights and peace agendas. Despite profound social, economic and cultural barriers, direct threats and attacks, lack of family support, including instances of public beatings by their husbands, wide-spread corruption and ongoing instability and violence 417 women ran for office in the recent elections. The women know that their full political participation and leadership directly relates to securing lasting peace in their country. Forty years of data on international crisis has shown, that for every 5% increase of women’s political representation in parliament, a country is five times less likely to engage in conflict when faced with international crisis. Mina’s list has supported this by providing trainings, listening sessions, strategic development, and technological support, including an app that women can use to fundraise and build constituencies. “We hold listening sessions to build a collective feminist agenda,” stated Henderson. “Funding is our biggest barrier. All of us need to find ways to support the substantive participation of these important women leaders.”

Mariam Jalabi, Co-founder of the Syrian Women’s Political Movement, spoke about her work on building a feminist political movement in Syria. Like the women’s political party of Northern Ireland, the Syrian Women’s Political Movement is a political space pushing for a women’s rights agenda. The SWPM works to establish a democratic and pluralistic Syrian state based on equal citizenship regardless of gender, race, religion, sect, geographic region or identity; and calls for a gender sensitive constitution that complies with CEDAW and international human rights and ensures equal rights to women and men.“We are done waiting for other processes”, stated Jalabi. “We are making our own space.” From her experience in engaging in the Syrian peace process early on, Jalabi noted that when the UN is involved, too often women’s participation becomes a ‘token’ rather than a process where women and women’s rights are fully and integrally included. As the conversations on peacebuilding in Syria move forward, it is important to ensure that the very structures that enabled violence and discrimination in society are eliminated.

Overall, participants called for Member States to support enabling environments for women’s participation by mitigating climates of fear that repress participation due to risks of sexual, gender-based, and other forms of violence, and by building women’s power and leadership for peace. They called on donors to develop long-term funding strategies that consistently invest in women’s participation across informal and formal spaces -- as civil society, voters, and local to presidential candidates. They also called the international community to identify what it will take for women to become influencers, and consistently support a feminist peace agenda for meaningful change.