Beyond the buzz: Gender in Arms Control.The Converging Agendas 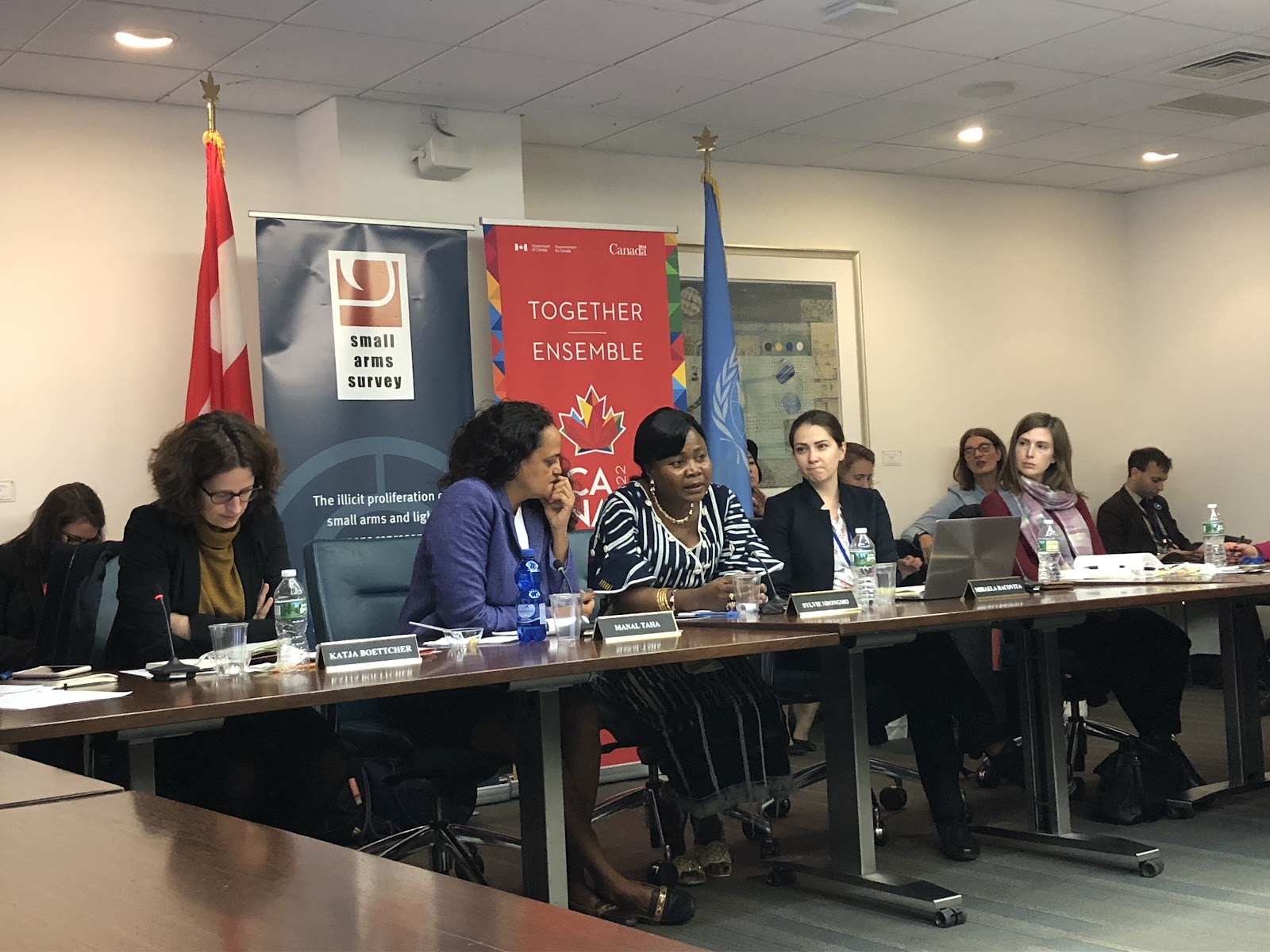 On 25 October 2018, the Permanent Mission of Canada, Small Arms Survey and WILPF co-hosted  an event titled, “Beyond the Buzz: Gender in Arms Control.” The Women, Peace and Security, Small Arms, and Sustainable Development agendas all affirm the importance of addressing gender and disarmament. However, action around these agedas too often efforts remains disconnected. Recognising this, this event created an opportunity to strengthen convergence across the three agendas.

The discussion was introduced by raising the lack of visibility of gender. “It is not just a numbers game on gender,” one of the participants stated. “It is also about strengthening the prevention side, and promoting women’s rights in conflict.” The rest of the panel explored opportunities to enhance coordination and policy coherence in order to strengthen women’s participation in disarmament work and accelerate gender responsive arms control.

WILPF Cameroon President Sylvie Ndongmo shared about how women in Cameroon are raising awareness of the need to ratify the Arms Trade Treaty (ATT) as part of implementing Cameroon’s 1325 National Action Plan, which should also be a priority for Cameroon’s implementation of the SDGs.  She affirmed the need for an integrated approach across the three agendas that does not water down action, but ensures the strongest form of accountability. This requires addressing extraterritorial accountability on arms transfers that promote humanitarian and gender-based violence consistent with the Arms Trade Treaty (ATT) as part of Sustainable Development and Women, Peace and Security implementation.

Ndongmo, also commented on the shrinking space for women who have the knowledge and the will to do this work, but face massive barriers to participate. "When women’s voices are missing,” she said, “we are missing part of the solution.” In the discussion with the audience, President of WILPF Colombia, Katherine Ronderos, asserted that the international community frequently talks about increasing women’s participation and space for engagement in security and disarmament, but when they are involved, they are not regarded as experts, probably because they use different language and do not refer with technical words used normally by experts; their perspective is disregarded and their recommendations are rarely integrated into policy and outcome documents.

Each panelist agreed that the lack of gender-disaggregated data regarding women’s roles in the small arms industry and lack of recognition on the gendered impacts of small arms have created barriers to addressing these issues. One of the participants claimed that without gender-disaggregated data available, policy making is gender-blind as it ignores crucial data needed for inclusive policy. “How can we even talk about women’s lack of participation when there is no data to make it visible?”, she said.

Participants explored how violent masculinity is linked to guns as status symbols of patriarchal power, and how easy access to guns (i.e., being able to rent a gun for $50/day in Colombia) contributes to deaths and violence against women. They also explored how controlling arms and ensuring women’s leadership as critical to upstream prevention and sustainable development and peace. Panelists discussed how the way masculinity is constructed means that men are conditioned to assert themselves as the protectors of women. Yet we rarely question what “counts” as protection, and traditional militarised approaches actually increase women’s risks. Participants called for the international community to recognise how investment in arms supports violent masculinities, and how promoting security that works for women and all people requires investing in and cultivating new models of partnership and nonviolence. To do this effectively, addressing power within particular cultural contexts at local, national and regional levels is crucial.

Overall, the panel affirmed the importance of recognising the interrelationship between the three agendas, and taking action to promote political change through policy coherence based on women’s human rights and disarmament commitments. Participants called for action to map and link up action across the different agenda, including by strengthening coordination across related National Action Plans and relevant working groups on implementation. They affirmed the importance of cultivating allies who prioritise gender and disarmament agendas in the face of a chronic lack of political will, including who will push gender-specific language in disarmament resolutions and implement commitments. They highlighted the importance of creating incentives and building the capacity and accountability of policymakers to incorporate a gender perspective on disarmament issues, including through gender disaggregated data. They called for core, ongoing political and financial support for local women civil society leadership. Overall, as actors develop their 2020-2030 strategic plans for accountability across the agendas, discussions affirmed the need for coordinated action that supports women’s participation and addresses gendered impacts to sustain peace.

Beyond the Buzz Concept Note

Beyond the Buzz Concept Note.pdf
BACK
TO TOP