Patriarchal Masculinity, Militarism, and the Women, Peace and Security Agenda

On 20 March 2019, WILPF, ABAAD, and the MenEngage Alliance hosted a side event that provided an interactive forum for the identification of good practices and lessons learned and development of policy recommendations to address challenges in transforming gendered power structures and engaging men in the implementation of the WPS Agenda.

Follow the link to the event summary here, or read the full text of the summary below:

ABAAD – Resource Center for Gender Equality, in partnership with the Women’s International League of Peace and Freedom (WILPF) and MenEngage Alliance, organized a side event under the title “Patriarchal Masculinity, Militarism, and the WPS Agenda” on the margins of the 63rd session of the UN Commission on the Status of Women (CSW) in New York. The event included an expert panel discussion that explored the concept of security on the international level and the patriarchal ideals that it retains. The side event brought together around 40 participants from diverse backgrounds including the United Nations system, country delegates attending the CSW63, civil society organizations, activists and researchers. 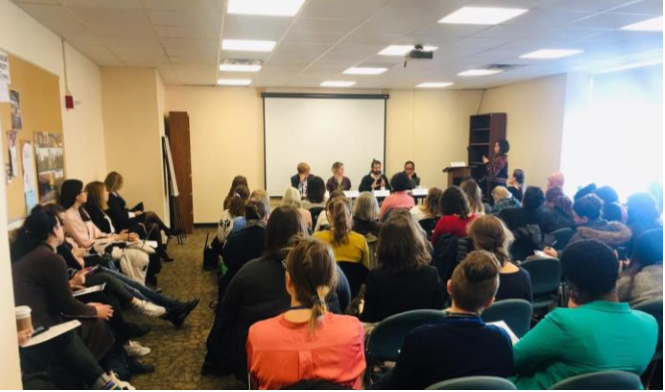 Mohamad Mansour, Senior Director of Programmes at ABAAD, welcomed the participants and introduced the topic of the day which aimed to answer the question: How is addressing masculinities connected to institutional change and what does this mean for the WPS agenda?

Anthony Keedi, Masculinities Technical Advisor at ABAAD, stated that there are very different manifestations of patriarchal masculinities, however they appear differently in diverse contexts. Irrespective of the context, however, Patriarchal Masculinities define “Security” as the level of power one has in comparison to the ‘other’. When one subscribes to this understanding of security, they would see partnerships with other powerful entities, the garnering of more individual power (often through violent or dominant means), and diminishing the level of power of the other as priority security measures.  At the international level, he emphasized that the concept of security retains patriarchal ideas of what it means to be secure in all decision making, from arms trade to investments, and that sense of power is linked to violence. Examples of this can be seen when a state invests in arming military groups around the world or have disproportionately high defense budgeting. As research has previously established irrefutable links between war and conflict on GBV and Gender Discrimination, it stands that understanding Security with the limited scope of a Patriarchal mindset can only adversely affect Gender Equality initiatives and increase GBV globally.

Abigail Ruane, PeaceWomen Programme Director, stated that UNSCR1325 was created not to add women to the war system, but to end the war. ‘’We need to revisit this transformative goal of the agenda and asses where we are at based on a higher standard’’, she said. Abigail talked about structural inequalities that are normalizing violence against women and war economies that are undermining the security of women. ‘’Today, we can see that violence is rooted in structural inequalities, patriarchy and political economies of war. Prioritization of arms comes at the expense of human rights and provides short-term crisis response that is not sustainable.” She referred to the WILPF Feminist Security Council Guidance Note while highlighting the need for the Security Council to ‘’step back from securitization and advance sustainable development’’, and the need for activists to go beyond individual approach to address gender power. 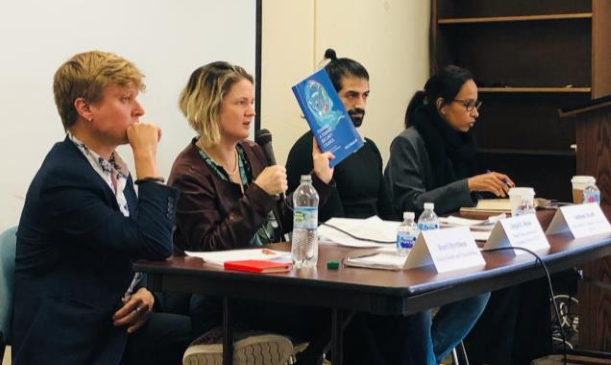 Henry Myrttinen, Head of Gender and Peacebuilding at International Alert, talked about the need to integrate gender perspective in peace building programs to start brining men and masculinities into our world. ‘’To address patriarchy, we must address masculinity’’, he stated. While the the space for and interest in discussing issues like toxic masculinities and patriarchy is greater than ever, there is also a risk of the potentially transformative agenda being coopted, he claimed. ‘’One of the paradoxes of working on men and masculinities in peace and conflict is that even though they are present everywhere – as soldiers, as guerrillas, as peace negotiators, as refugees – their gender identity, their masculinities, and how these shape and are shaped by conflict and peacebuilding largely remain unquestioned.’’ He stressed on the need to commit to dismantling and transforming the gendered and radicalised inequalities created and perpetuated by patriarchal institutions and other power structures, instead of simply involving men or adding ‘men and boys’ to the phrase ‘women and girls’.

Panelists concluded by reiterating the importance to push for higher standards when it comes to the WPS agenda that would bring a feminist lens, which must be more realistic and correspond to realities on the ground. By capitalizing and building on existing women leadership across the globe, activists must move from individual to institution and push for shifts in gender power. To do so, they must have an intersectional lens and use a holistic approach that would engage the community, including people with disabilities, migrants and marginalized groups, to push forward the WPS agenda and promote peace building and conflict resolution. Sulafa Musa, Masculinities & PVE Regional Program Manager at ABAAD, who was acting as the rapporteur, emphasized that there must be a nuanced understanding of the causes that lead young men and women to violent extremism, including the role of toxic masculinities as a main driver to violent extremism, not only in the MENA region, but across the globe.

‘’We need to look at male privilege; where does it fall in this concept of masculinity and the work of masculinities. Women represent less than 10% of negotiators at peace talks and this needs to be changed’’ Henri Myrttinen

‘’Ahead of 2020, we need to be pushing for a shift in power, which means being constantly uncomfortable. Not just working with men but address structures and making the links institutionally.’’ Abigail Ruane

Follow us on social media (and consider becoming a member) to join the conversation!