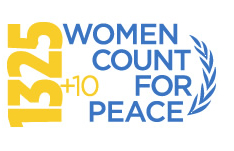 A compelling high-level Ministerial side-event of the 65th General Assembly, titled “A 1325 Call to Action”, took place on the 25th of September at the UN Headquarters in New York. The high-level attendance and the spirit of the event set the stage for the 10th anniversary of the Security Council Resolution 1325(2000) on Women, peace and security (Open Debate set to take place on 26th of October 2010).

The event launched the commitments project, an initiative that aims to assess the degree of implementation of 1325. PeaceWomen hosts the Commitments Database, developed by UNIFEM (part of UN Women), which will feature commitments made by Member States, the UN and Civil Society to operationalize 1325 implementation. Actors can fill out and submit the commitments form. These S(pecific) M(easurable) A(chievable) R(elevant) T(imebound) actionable goals in the realms of policy, civil society engagement, monitoring, and financial commitments, are being compiled and cataloged to promote accessibility and transparency.