Connecting Grassroots and International Efforts for Action on Women, Peace and Security: Leveraging our Local to Global Movements 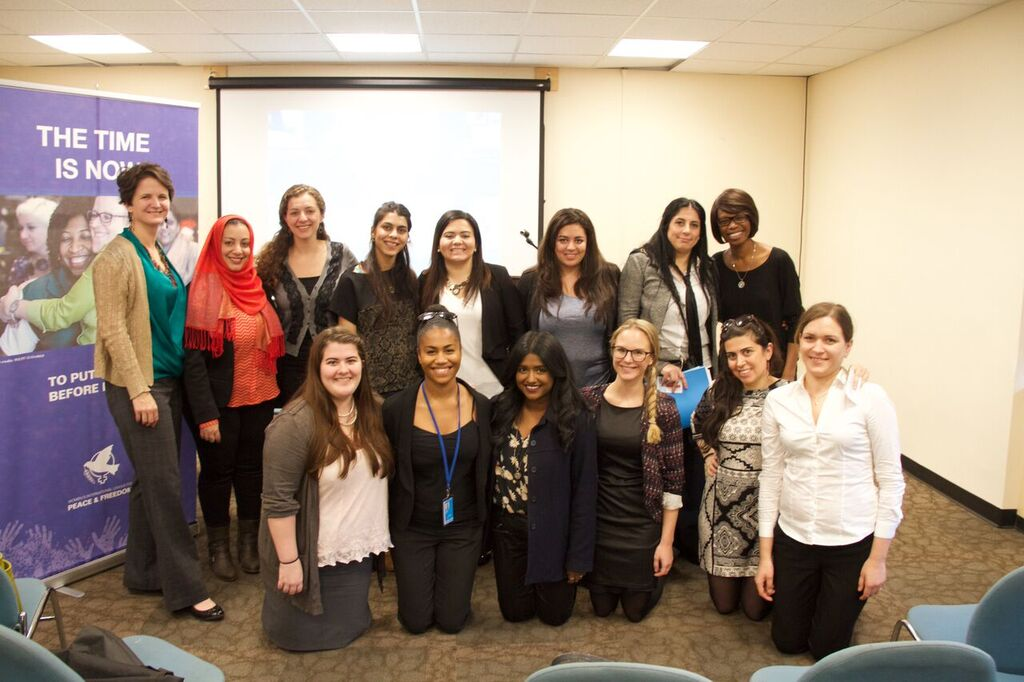 On 24 October 2016 at 4:00pm, WILPF held a public event centred around connecting grassroots movements with international efforts for action on Women, Peace and Security in the Middle East. The event was moderated by Laila Alodaat, WILPF Crisis Response Programme Manager. Alodaat set out the framework for the discussion and introduced the panel. The panel was made up of three women from Yemen, Lybia and Syria.

Rasha Jarhum is a Yemeni Social Protection Specialist, women’s rights advocate and a 2016 Aspen New Voices fellow. Jarhum spoke first, sharing her experience as a former member of the Yemeni Women’s Pact for Peace and Security brought together by UN Women to partake in formal peace negotiations addressing the ongoing civil war in Yemen. Although Yemen - like Syria - has been heralded at the UN in New York as good practice, local participants see a very different story with serious ongoing challenges. Despite steps forward in including women in some form, existing mechanisms remain too often remain simply efforts to “check the box” and do not create appropriate mechanisms to ensure women’s substantive and meaningful participation. Jarhum called for UN Women, Department of Political Affairs, and supportive member states to ensure that women’s groups are provided expert facilitation that ensures engagement is prioritised rather than sidelined; that they work with the groups to develop clear strategies and planning; that they ensure transparent communications among UN actors and women involved; and that all actors take steps to ensure safe space for discussions which to not increase threats to the women’s personal security. Jarhum concluded by asking how we can move women from a secondary role into a primary one in peacebuilding and encourage better relations between local and international organisations.

Waad Hamida is an advocate working with civil society to support peacebuilding efforts in the post-conflict state of Libya. Hamida co-founded the Students Peace Movement in Tripoli University and also advocates for the implementation of UNSCR 1325 in Libya. Hamida underscored the impact that conflict has, not only on women in general but, on women civil society in particular. She noted that women in Libya face intimidation because of their work. She argued that the international community needs to ensure that these women keep working and are kept secure at the same time. For this to happen they need extra support from the international community and international NGOs (INGOs) like WILPF. In particular, women civil society in Libya need financial and technical support to monitor implementation of UNSCR 1325. Additionally, the international community has to put extra pressure on governments to include UNSCR 1325 in their agendas. When both the UN and the international community push governments they are more likely to change, albeit slightly. For example, women’s representation in the Libyan government went from less than 10% to 17% in 2012. This is an example of furthering the WPS Agenda by improving women’s participation.

Sema Nassar is a Syrian human rights advocate working on gender-based violence against women, she is a board member of Urnammu and a member of the EuroMed Rights network. Nassar works with Syrian detainees and forcibly displaced people both in and outside of Syria. From her experience she has noted that a disproportionately high number of women commit suicide following release from detention. This leads us to think about the role of the international community in implementing UNSCR 1325, and devising means of addressing the situations that these women and girls face. Another grave problem in Syria is the use of explosive weapons in highly populated areas. After suffering injury from such weapons, children in particular cannot access medical assistance. These factors lead Nassar to conclude that the international community needs to activate accountability systems in Syria and hold perpetrators accountable for crimes carried out against civilians.

Alodaat drew the connection between the local and global by noting that for the 2016 universal periodic review of Syria, WILPF had worked with 10 women civil society organisations in Syria to strengthen accountability and international mobilisation for action. Together they highlighted the Syrian government’s shortcomings in, for example, violence against women, torture of human rights defenders and the impact of small arms on women. She further noted the difficulty in seeking accountability of perpetrators in the International Criminal Court for Syria, Yemen and Libya. The international community needs to introduce the idea of transitional justice for those who have been severely affected both in country and as refugees.

The audience engaged in a lively discussion facilitated by WILPF’s Laila Alodaat. A key question which the audience brought out was, “what can INGOs in New York and elsewhere do to bring attention to critical gaps between grassroots work and work at the international level?” Jarhum suggested that INGOs could carry out external evaluations of peacebuilding initiatives implemented by the UN in conjunction with grassroots activists. This would provide an independent and impartial measure of success as well as noting space for improvement for the UN. Nassar elaborated on this, noting that sometimes UN agencies ask for suggestions and feedback about what they should do however there is no follow up with consolidated results or action plans. INGOs can fill this gap between grassroots movements and the UN system by coordinating global policy with local implementation through amplifying the voices of local women’s rights advocates in global decision-making.

MondayOctober24ConnectingGrassrootsSummary (1).pdf
BACK
TO TOP