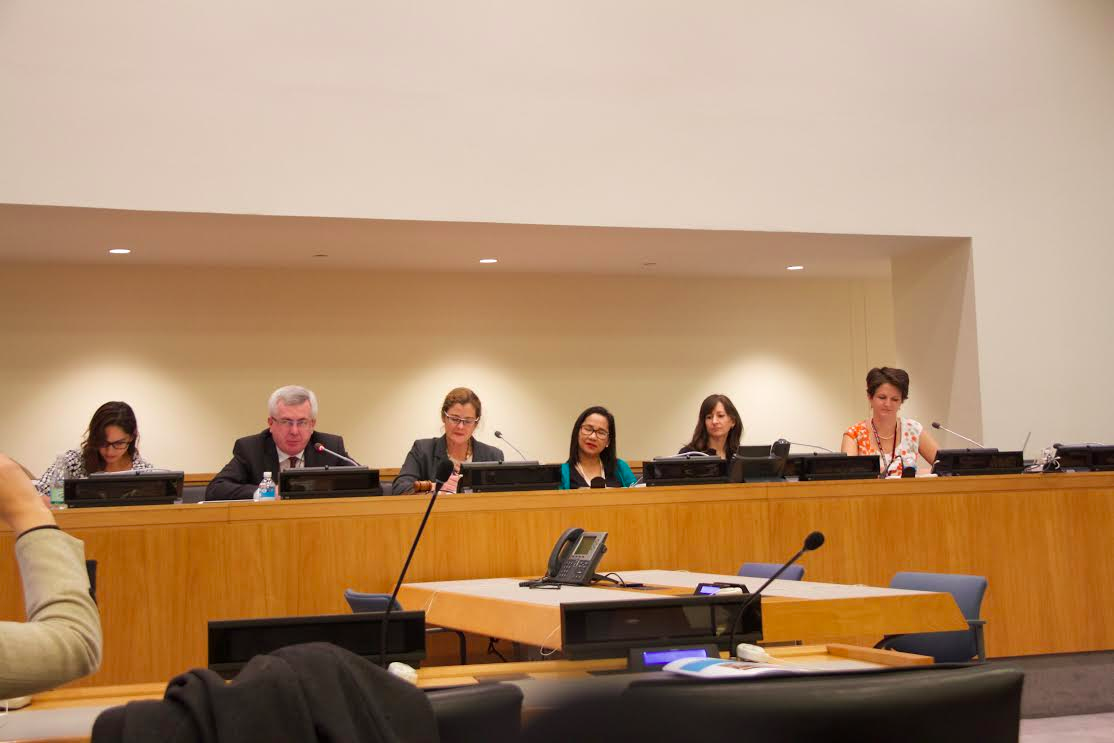 Panelists at the  “Financing the Women, Peace and Security Agenda: Good Practice and Lessons Learned for Accountability and Implementation” event. (Photo: WILPF/Anna Warrington)

On 27 October 2016, WILPF, the Global Network of Women Peacebuilders (GNWP), UN Women, and the Missions to the United Nations of Australia, Ireland, Spain, and the United Kingdom co-hosted an event on financing the Women, Peace and Security (WPS) Agenda. The event aimed to mobilise member states to strengthen financial commitment and action to move from commitments to accomplishments. Moderated by former UN Women Head of Peace and Security and current NYU Professor Anne-Marie Goetz, the panel of six experts exchanged and addressed lessons, good practices and pressing concerns to move the Agenda forward.

Deputy Permanent Representative Tim Mawe of Ireland began the conversation by reminding the audience of the importance of strengthening women’s participation, protection, and rights in conflict prevention through post-conflict reconstruction processes. “Women need to be sitting at the table, not behind,” he stated. Despite the urgent need, the WPS Agenda remains chronically underfunded. Mawe called for governments and civil society to take action to strengthen WPS financing as a matter of priority, including by strengthening conflict prevention and disarmament and contributing to the innovative Global Acceleration Instrument.

WILPF PeaceWomen Programme Director Abigail Ruane continued the conversation by challenging the scarcity mentality on financing gender equality and peace and sharing about WILPF’s #MoveTheMoney toolkit to strengthen mobilisation for WPS financing and accountability. “It is not that we don’t have the money for peace and gender justice. We just spend the money we do have badly,” she stated. According to the Global Study, only two per cent of aid on peace and security targets gender equality. In fact, the budget of the entire global feminist movement ($106 million for 740 women’s organisations according to a 2013 AWID survey), is approximately equivalent to one, F-35 fighter jet (approximately $137 million). We cannot continue this failed approach. According to Ruane, “the time is now to #MoveTheMoney from war to peace and gender justice.”

GNWP International Coordinator Mavic Cabrera-Balleza shared innovative action on financing UNSCR 1325 National Action Plans (NAPs) to strengthen implementation and accountability. According Cabrera-Balleza, of the 63 NAPs around the world, only 12 have a dedicated budget for implementation. This is a serious challenge, because peace requires not only time and effort, but also proper allocation of resources. NAP financing workshops, such as conducted by GNWP, provide one important mechanism for strengthening financing of the WPS Agenda. “Peace is not a project,” stated Cabrera-Balleza. “It is not something that one country can work on alone, and it is not something that people or organisations can get done immediately.”

UN Women Deputy Chief of Peace and Security Nahla Valji spoke about the importance of investing in civil society for conflict prevention efforts. Research now shows that peace agreements last longer with women and civil society, and that feminist movements are the number one predictor of policies on reducing violence against women. However, although UNSC Resolution 2122 (2015) calls for greater funding for civil society organisations, governments continue to invest almost no resources in civil society. In 2015, only 23 governments made financial commitments on WPS. “We must invest in prevention in order to stop the expensive cost of conflict resolution,” she stated. Valji called for states to support the Global Acceleration Instrument as one key way of supporting women led civil society.

PBSO Programme Officer Jelena Zelenovic shared about PBSO’s recent Gender Promotion Initiative which was for the first time opened to civil society in 2016 as another example of strengthening financing for civil society and strengthened WPS accountability. Zelenovic reiterated the theme that “women’s empowerment and promotion are key to achieving peace.” However, she noted that there is a disconnect between what is happening on the ground from what the United Nations is willing to support. Investing in funds that invest in women led civil society such as PBSO’s gender promotion initiative should be a key priority for action.

UN Women Gender and Humanitarian Policy Specialist Elizabeth Cafferty shared about the WPS commitments made at the May 2016 World Humanitarian Summit and how the Grand Bargain launched can make both WPS and humanitarian action more efficient and effective. At the Summit, approximately 18 per cent (545 of over 3,000) commitments were on women and gender, including on: gender-disaggregated data, integration of gender markers, investment in the Global Acceleration Instrument, and ending of humanitarian funding for gender-blind programs by 2018. The Grand Bargain, launched at the World Humanitarian Summit, aims to direct humanitarian funding towards local communities by reducing restrictions, providing more predictable and continuous humanitarian response, and realising 30 per cent of humanitarian funding is un-earmarked or softly earmarked by 2020. Cafferty concluded by saying that “when you invest in women, you get greater returns.”

At the 16th anniversary of UNSCR 1325, the time is now to move the money and invest in holistic WPS Agenda that strengthen conflict prevention and gender equality for sustainable peace. There are many different good practice opportunities for taking action. Now is time to step up.

Save the date WPS Financing 27 October.pdf

FinancingtheWomenPeaceandSecurityAgenda (2).pdf
BACK
TO TOP