From Shrinking Spaces to Feminist Movement Building: Key Priorities on SDG 5 and 16 for Sustaining Peace

“Without gender justice, it is impossible to have peace.” 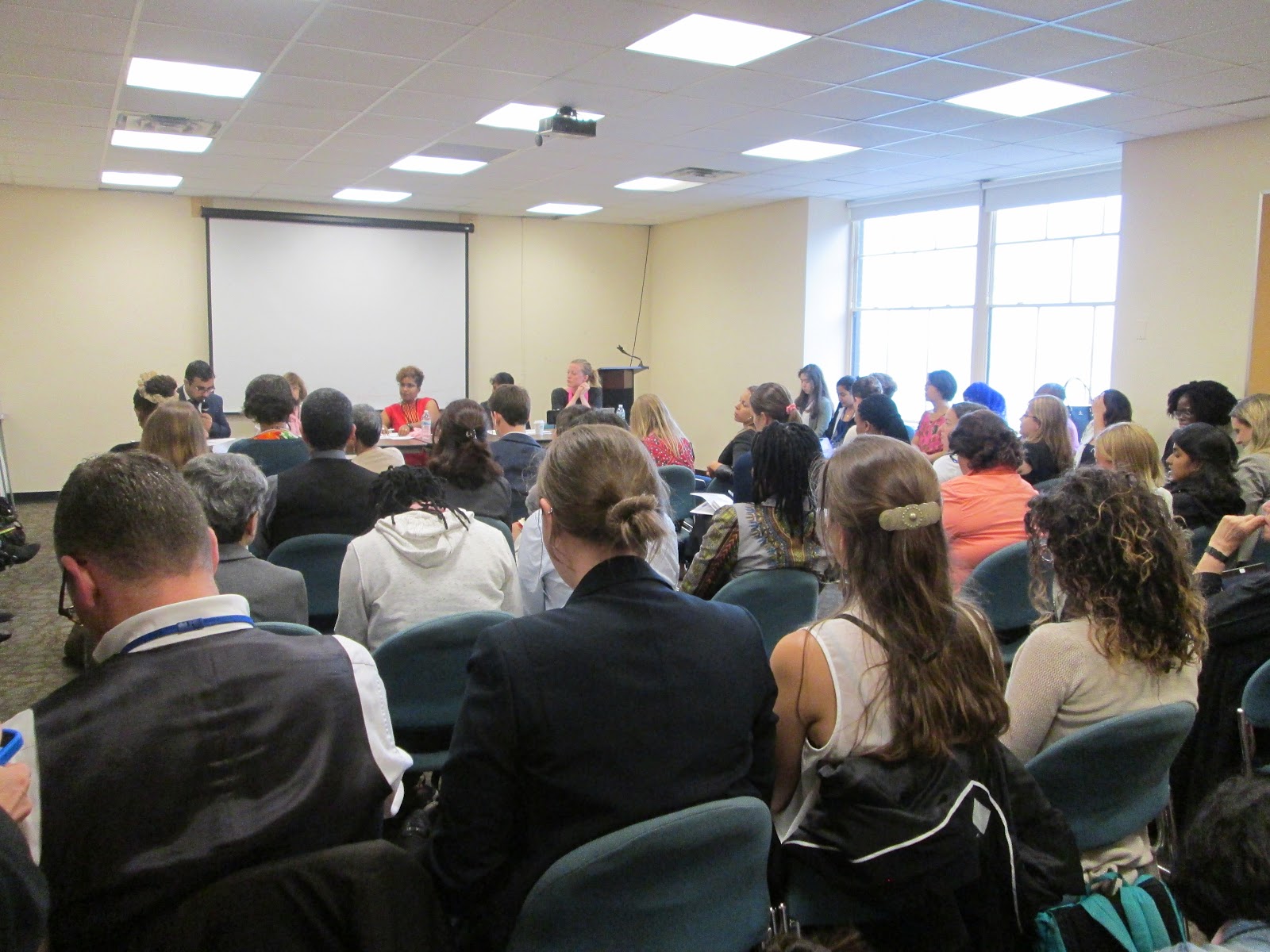 Participants and panellists of the 2017 HLPF side event entitled, From Shrinking Spaces to Feminist Movement Building: Key Priorities on SDG 5 and 16 for Sustaining Peace” (Photo: Alexandra Rojas)

On 14 July 2017 Women Deliver, Women for Women International, Women's International League for Peace and Freedom (WILPF), CIVICUS, FEMNET, MenEngage Alliance, Plan International, the African Women’s Development and Communications Network and UN Women held an event entitled, “From Shrinking Spaces to Feminist Movement Building: Key Priorities on SDG 5 and 16 for Sustaining Peace.” Over 70 participants from civil society, government, and the UN agencies as well as a live-streamed audience joined the event.

The event was held on the margins of the 2017 High-Level Political Forum (HLPF), which reviewed the 2015 Sustainable Development Goals (SDGs), with a priority theme of “eradicating poverty and promoting prosperity in a changing world.” In a world where social norms around violent masculinities and political economies of war increasingly restrict women’s full participation in society, the event illuminated the interconnected barriers and systems of oppression for feminist movements that prevent meaningful participation for gender equitable development and peace.

The event denounced the oppressions faced by feminist movements due to their critical role of challenging patriarchal societies. Panellists talked about the ways in which national governments have restricted women’s rights organisations and feminist groups through formal (e.g. prohibition from registering women’s rights organisations) and informal (women’s freedom of movement, tolerated harassment, impunity, etc.).  As summed up by one of the participants, “the reason why governments limit civil society space is because they feel threatened by activists organising around gender”.

Lopa Banerjee of UN Women opened the event by acknowledging that civil society and the women’s movement have greatly contributed to the formulation of SDGs, despite the fact that the attacks on women human rights activists are increasing in number and severity. The rise in totalitarian regimes and rise of ultra-conservative political figures significantly challenge the international order of multilateralism, solidarity and pluralism, hardening misogyny, sexism and violent enforcement of traditional gender roles across the globe. While some collective democratic progress has been made towards achieving gender equality and feminist peace building, many divisions lead to a growing number of undemocratic processes. The notion of intentional inclusion is crucial to frame the strategies to address the gender divide. Banerjee invited all participants to continue amplifying the women's movement building, providing alternative avenues for women's voices to be heard and focus on solidarity-building with civil society organisations (CSOs).

Gabriella Irsten of WILPF Sweden highlighted the existence of a crisis of meaningful participation that is clearly exemplified by the status of gender equality and women’s rights worldwide. While gender equality has been recognised to be the number one predictor of peace, one F-35 fighter jet costs about the same as the budget of the entire global women’s movement. In fact, $1.6 trillion arms trade would be a substantial contribution to the SDG5 implementation. Similarly, she raised the question of policy coherence, bringing the example of her own country, Sweden. While Sweden explicitly positions itself as a leader in gender equality and sustainable development, it is one of the biggest arms sellers per capita and contributes through its arms export to Saudi Arabia to the suffering of Yemeni women and children, among others. Ensuring that the SDGs work for women in conflict situations and everywhere first requires the recognition by the developed countries of their extraterritorial accountability on sexual and gender-based violence (SDG 5.2) due to arms (SDG 16.4) consistent with the Arms Trade Treaty and flipping the power structures towards a more gender equitable and feminist policy-making. While recognising Sweden as a global actor and ensuring accountability outside of its borders is a challenge, Irsten suggested that the SDGs have provided a useful tool to promote an integrated approach that strengthens women’s participation in peace work.

Presenting the situation of space for the feminist movement in Iraq, Ismail Aziz, a Women Deliver Young Leader, highlighted the importance of investing in women’s education for their empowerment and engaging men and boys to prevent violence against women and girls. According to Aziz, working with younger imams and faith leaders is one of the ways in which the existing patriarchal values and cultures can be challenged and changed.

On her end, Saba Ghori of Women for Women International brought up how women’s rights are consistently seen as a third tier issue, which means they are never prioritised by policy makers and donor agencies and rather are repeatedly sidelined. According to Ghori, “local women's organsations need flexible funding, support and capacity-building training, which is what Women for Women International is doing in conflict countries". Her discussion raised important issues of how INGOs and donors can use their position and privilege to ensure local women’s organisations’ perspectives and viewpoints are considered in decision making and advocate for local women’s meaningful participation for peace.

Finally, Mabel Bianco of the La Fundación para Estudio e Investigación de la Mujer (FEIM) brought attention to the structural obstacles that prevent women from being equal partners for peace and development and discussed good practices in building platforms for women’s meaningful participation for peace. As part of this, Bianco noted that local grassroots organisations are unfavourably positioned to receive funding because funding is usually directed towards bigger NGOs. She called for greater financing of local grassroots women’s organisations. Bianco also shared about good practice in platforms for civil society participation: building on the good practice at the national level in the Major Group and Other Stakeholder System (MGoS), Regional Civil Society Engagement Mechanisms (RCEMs) such as in Asia are saving space in an environment of increasing attacks on women human rights defenders and peace activists. The 2016 and 2017 Women’s Major Group reports on civil society engagement in the SDG Voluntary National Review (VNR) process show that civil society engagement remains inconsistent. Still women's groups and NGOs have no possibilities to have meaningful participation in the follow-up process; there is no capacity-building to provide diverse women’s groups, including those in rural areas, indigenous groups and others. Strengthening platforms including by supporting regional and national translations of the MGoS platforms will be critical for ensuring women civil society’s important role in localising the SDGs for gender equality and peace.

After presentations by speakers, the event then moved to a vibrant discussion, in which participants were able to present their good practices and recommendations on action needed for SDGs 5 and 16 to create an enabling environment for feminist movements worldwide. According to Cynthia Rothschild of the Women Human Rights Defenders International Coalition, the language of “shrinking civil society space” is too passive because civil society does not “expand and contract like a sponge,” but is being directly attacked. Dinah Musindarwezo of FEMNET shared her experience from the SDG Forum in Kenya and encouraged feminist organisations to use multi-sectoral groupings (including with the private sector) to better access national decision-making. Joni van de Sand of Men Engage called for “a fundamental shift in the way funding streams are happening, from military to peace, from private sector to civil society organisations”. “We are asking for way more than just a piece of the pie,” she noted.

The participants concluded that moving from shrinking spaces to feminist movement building is critical to making the SDGs work for women and girls in conflict. However, this will only be possible when the international community reorients it work to prioritise strengthening local women’s voices and rights, and in the process moves from business as usual to truly sustainable development that protects the environment and promotes women’s rights for gender equality and peace. In particular, participants recommended that: SDGs to be implemented in a way that addresses “spillover” effects and ensures extraterritorial accountability for human rights obligations in action for policy coherence (17.14), including around sexual and gender based violence (5.2) due to arms (16.4). They called for donors to increase core reliable funding of women’s rights and women’s peace work and to evaluate and redress the impact of counter-terrorism financing on women human rights defenders. They affirmed the need for the UN to support regionalisation and nationalisation of the MGoS system as a good practice and provide further political and financial support for civil society engagement. They recommended that international financial institutions (IFIs) ensure programmes in post-conflict countries and invest in women’s social and economic rights institutions rather than shifting burden of care to women and providing reparations to violence. And, in the face of a rising question over whether or not a strong ministerial declaration would be adopted at the HLPF, they supported calls by the Women’s Major Group to ensure adoption of a ministerial declaration with strong language supporting women’s human rights and women’s human rights defenders, including support for women in occupied territories.

As highlighted by each of the speaker's experiences in countering the shrinking of civil society space, “leaving no one behind” in the search for peace and prosperity requires women’s meaningful participation at all levels. In this way, all member states have the responsibility to implement SDG 5 and SDG 16 to the best of their ability and develop action plans to meaningfully support the movement for feminist peace.