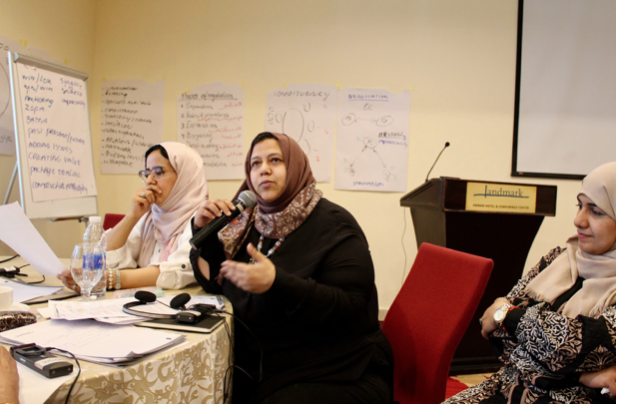 Six months into the COVID-19 pandemic, the already disastrous humanitarian situation in Yemen has further worsened due to the ongoing war, a weakened currency, a drop in remittances, and a failure of donors to meet humanitarian pledges. The war in Yemen has been ongoing now for 5 years, despite the repeated calls for a ceasefire and peace by the Yemeni people and civil society groups.

On 15 September 2020, the UN Security Council held its regular meeting to discuss the situation in Yemen, with briefings by Martin Griffiths, Special Envoy of the Secretary-General for Yemen and Mark Lowcock, Under-Secretary-General for Humanitarian Affairs and Emergency Relief Coordinator. The discussion focused on key humanitarian and political issues, including the need for a nationwide ceasefire, the rapidly worsening humanitarian situation, the gap in funding for the humanitarian appeal, humanitarian access, the human and environmental risks posed by the Safer oil tanker, the regional dimensions of the conflict, and the current impasse in the political process.

In the meeting, many Council members called for a nationwide ceasefire and for conflict parties to engage in good faith in the UN-mediated political process. However, listening to the discussion and the words of support for peace, it would be easy to forget that alongside other states such as Iran, some Council members and their allies also bear direct and indirect responsibility for perpetuating this devastating conflict with their support to conflict parties, including through arms transfers. Since the start of the conflict, WILPF has repeatedly highlighted the ways in which arms transfers are contributing to human rights violations and violence against women and girls in Yemen, including to sexual and gender-based violence. (See recent statements and submissions on the gendered impacts of arms flows, France, Germany, the United Kingdom, the United States, and Yemen).

On participation, women-led civil society groups in Yemen, including the Peace Track Initiative, have repeatedly called for the inclusion of women in the peace process, to at least 50%. They have also highlighted how the process has excluded women thus far. In her statement from May 2020 at a roundtable on the impacts of the Yemen conflict on women and children, Rasha Jarhum of Peace Track Initiative stated that action from the Special Envoy is critical for making the conflict parties comply with their commitments on Women, Peace and Security, including the recently-adopted Yemeni 1325 National Action Plan. She called for the Special Envoy to impose a 50% quota for the talks, leaving vacant seats if women are not included.

In his briefing, Special Envoy Griffiths spoke about the vital role that Yemeni civil society has played in calling for peace, and their leadership on key issues such as the release of detainees. He reported that his office has been engaging with civil society groups around the drafting of the Joint Declaration, and on their meaningful inclusion in the future political process. Specifically, he reported that his office has increased their engagement with the Yemeni ‘Group of Nine’ women’s organisations, which includes WILPF partners are part of, and are holding a technical skills workshop with the Yemeni Women’s Technical Advisory Group. Frustratingly, we are hearing from Yemeni civil society that behind closed doors inclusion of Yemeni women continues to remain dismal. Groups report that the opportunities presented for participation in the peace process, as outlined by the OSE, have been minimal, and superficial when available. Throughout the discussion, other states, including Germany, South Africa, and St. Vincent and the Grenadines, expressed support for the meaningful participation of women as well as other groups to reflect the diversity of the Yemeni people, and other states broadly echoed calls for inclusion as well. It is critical that the OSE makes meaningful participation of women an urgent, non-negotiable, and immediate priority.

The September 2020 report of the Group of Eminent International and Regional Experts on Yemen (GEE) reported that “entrenchment of patriarchal gender norms and marginalization of women and girls, as well as persons with a non-conforming sexual orientation and/or gender identity, has continued by parties to the conflict.” It found that the continued perpetration of gender-based violence by the conflict parties may constitute war crimes, in violation of international human rights law and humanitarian law. Highlighting the findings of the GEE in their statements, Belgium, the Dominican Republic, Estonia, and Germany noted that the GEE has identified a consistent pattern of human rights violations perpetrated by the conflict parties, including sexual and gender-based violence, and the rampant targeting of activists, journalists, and human rights defenders including through kidnapping and enforced disappearances.

Yemeni women-led civil society groups have long highlighted the collapse of the protection system in Yemen, which has led to them filling in these protection gaps and taking leadership on humanitarian issues. The Houthis arbitrarily detain women, including women human rights defenders, and subject women detainees to sexual abuse and torture. In her statement of 30 July, Dr. Amat Al-Salam Al-Hajj, Chairwoman of the Mothers of Abductees Association, highlighted the importance of making a distinction between arbitrary detained civilians and prisoners of war, and to pressure the parties to release civilian detainees without any conditions. In government-controlled areas, women also face numerous challenges including lack of access to basic services, threats by armed groups, confiscation of land and property, attacks on women’s organizations, death threats, and intimidation.

The issue of arms transfers was also raised in the GEE report, which called for the Security Council to refer the conflict to the International Criminal Court (ICC) for an investigation into potential war crimes. However, arms transfers were not brought up in the Security Council’s discussion. The GEE repeated its call for countries, specifically Canada, France, Iran, the United Kingdom, and the United States, to stop providing arms and military support to the conflict parties in Yemen. Included among these countries is Canada, which hosts the Group of Friends on UNSCR 1325 and has made many commitments in the past on women, peace and security, but in 2019 has increased its weapons sales to Saudi Arabia at nearly $2.9 billion. In July, the United Kingdom decided to resume transferring arms to Saudi Arabia, ending last year’s suspension after ruling in an appeals court that found these arms sales “unlawful”. This decision was made despite documentation that these weapons were being used in violation of international humanitarian law, with the UK claiming that, despite all evidence, they believe that “Saudi Arabia has a genuine intent and the capacity to comply with international humanitarian law”. Last year, the White House pushed through US arms sales to Saudi Arabia and the United Arab Emirates by vetoing a Congressional resolution to block these transfers. These transfers have persisted, and a recent report of the State Department Inspector-General found that US arms transfers to Saudi Arabia failed to take into account humanitarian considerations and also circumvented US law. The GEE report stated that these transfers are in “blatant disregard of the documented patterns of serious violations of international humanitarian law and international human rights law in the conflict to date,” and that parties which continue these transfers are failing in their responsibilities to ensure respect for IHL and may be in violation of their obligations under the Arms Trade Treaty.

Back in July, Wafa’a Alsaidy, Head of Mission of Médecins du Monde in Yemen, briefed the Council on the dire medical situation in the country. In her recommendations to the Council, she pointed out the blatant contradictions between arms trading and calls for peace, and called for an end to any support for the conflict, including from Council members. Raja Abdullah Ahmed Almasabi from the Arab Human Rights Foundation also briefed the Council back in July on the outsized impacts of the conflict on people with disabilities. She also called for an immediate end of arms trading and other support to the conflict parties, and called for the meaningful participation of people with disabilities in the peace process.

As WILPF has highlighted, there are direct links between arms proliferation and sexual and gender-based violence. If Council members, their allies, and other powerful nations are serious about ending the war in Yemen and ending sexual and gender-based violence, they must look in the mirror at their own complicity. States cannot merely condemn violence and repeat the same lines about the importance of a ceasefire or a peaceful settlement without addressing the role of the international community and particular states in selling arms to warring parties. Commitment must rest on ending the supply, and orient toward prevention and a sustainable, inclusive peace in Yemen.