Women's International League for Peace and Freedom (WILPF) at the 58th Commission on the Status of Women (CSW):
Women's Local to Global Dialogue at UN Headquarters amplifying the voices of WILPF women's rights advocates
March 10-21, 2014 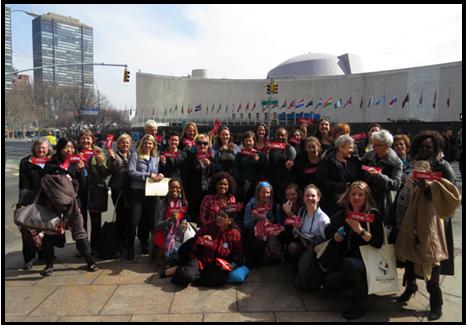 WILPF members had an energizing experience at CSW 58, where 75 activists and advocates from the WILPF global network joined over 3000 other civil society participants at hundreds of events in a two week long hustle and bustle around UN Headquarters. WILPFers came from Syria, Nigeria, Pakistan, Colombia, Geneva and many places in between. We united as a delegation to collectively raise our voices and bring attention to the fact that you get what you pay for, and there can be no peace or development without disarmament and women's full and equal human rights.

Together, we spoke fiercely and truthfully. We organized 10 successful events and we mobilized and build momentum around WILPF's 100th anniversary movement recognizing Women's Power to Stop War! Thanks to everyone who joined us and shared a photo in our #100Women4Peace photo campaign or engaged with our unprecedented social media discussions through #CSW58 #WILPF100 #DisarmSDGs!

WILPF's inspiring Secretary General, Madeleine Rees was honored as the recipient of the Dean's Social Justice Award by the CUNY School of Law on March 13th for her leading legacy of advocating for women's human rights throughout conflict. “When women are not represented in peace processes, it is a failure. It is absolutely vital to include women in peace negotiations”, Madeleine remarked discussing the situation in Syria. We all joined in celebrating Madeleine and her work with WILPF for peace.

“Together and in many forums, WILPF participants united to demand action creating peace through demilitarization and disarmament”, recalls WILPF PeaceWomen Programme Director Maria Butler, who coordinated WILPF's work at CSW. Many of WILPF's events were standing-room only, demonstrating the importance of the issues we addressed.

At WILPF's “From Bosnia to Syria” event, WILPF partners and Syrian women peace leaders Nawal Yazeji and Sabah Alhallak, as well as Bosnian women peace leaders Nela Porobic Isakovic and Gorana Mlinarevic, shared experiences from the powerful recent workshops WILPF held bringing Syrian and Bosnian women together to learn from each other's experiences and strengthen women's participation and rights in peace processes. Women both from Syria and Bosnia highlighted the need for women to be seen as agents not as victims and to design gender equality into post-conflict governance systems.

WILPF launched our WILPF PeaceWomen mobile application on Women Peace and Security (WPS)- now available on all smart phones! – at our event, “Access and Technology: Breaking Down Barriers to an Holistic Women, Peace, and Security Agenda” 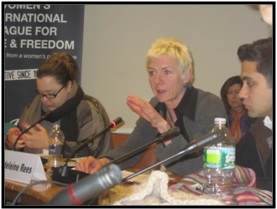 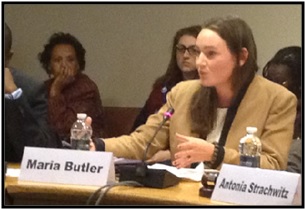 WILPF's advocacy was part of what ended up being a successful push for the CSW Agreed Conclusions to demand gender equality as a priority in the next Post2015 development agenda through a call for a stand-alone gender equality Sustainable Development Goal and gender integrated throughout all other SDGs. Despite this, we continued to be frustrated with pushback, even on human rights broadly, especially on sexual and reproductive health and rights. We are particularly concerned that a small number of States (led by the USA and China) were also able to delete support for reducing military spending and financing development: This is a failure of the CSW 58 Agreed Conclusions, not to include already agreed language from Rio (1992) and Beijing (1995) on financing development by reducing military spending. New ways to tackle this resistance and galvanize support for stronger progressive language in the post-2015 development framework must be found.

In addition to holding our own WILPF events, the PeaceWomen team (Maria Butler, Abigail Ruane, Cristina Chahine, Sandra Neuman, and Shafferan Sonneveld) monitored over 60 events related to the women, peace and security agenda during this years' CSW. For the full report, which will be uploaded soon, please see our website.