PeaceWomen welcomes our WILPF Delegation for #1325at15!

“We need to move from global to local to make women’s perspective seen on an international level.” Manuela Mesa, Vice President, WILPF Spain

From 19th to 23rd October, WILPF PeaceWomen hosted a delegation from our WILPF sections in New York, who joined from nine countries: Cameroon, Colombia, Democratic Republic of the Congo, Lebanon, Nigeria, Spain, Sweden, the Netherlands, and the United Kingdom. Delegates participated in civil society events surrounding the 15th Anniversary of the UNSCR 1325,the High Level Review of the UNSCR 1325 and the launch of the Global Study.

During the week, the delegation strategised in an internal WILPF workshop, “Mobilizing women, localizing peace,” shared information on good practice in overcoming challenges from different country situations, and contributed to a variety of events and meetings aimed at building momentum across the month and beyond October for change. 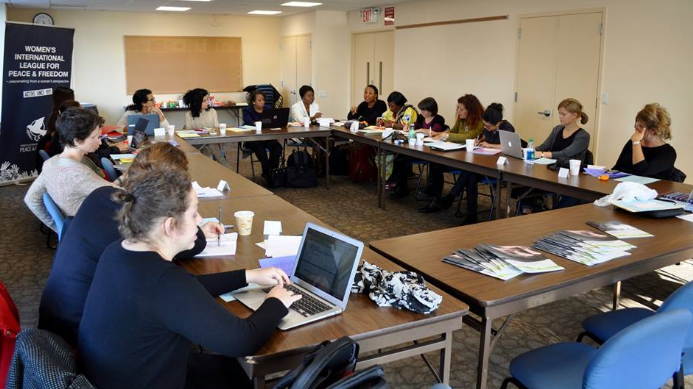 As one part of this engagement, WILPF delegates participated in and facilitated conversations circles at our event, the Prelude to the Peace Forum, aimed at creating space to mobilize civil society and consolidate key recommendations for the UN, governments, and other key stakeholders on the 15th Anniversary of UNSCR 1325. With activists from around the world, participants engaged in enriching discussions about inside and outside strategies for making change in key gap areas including: holistic agenda, prevention, participation, violent extremism, financing, engaging men and boys, and outsider strategies.

On Thursday 22nd October, Katherine Ronderos, of WILPF Colombia, spoke on the impact of weapons proliferation in Colombia, following over six decades of conflict, and explored the importance of disarmament and demobilisation efforts in post-conflict Colombia on women, during an event by WILPF Reaching Critical Will,  “Arms Trade Treaty, UN Programme of Action, and Gender-Based Violence.” The event addressed discussed the importance and challenges of creating synergies within implementation of disarmament agreements to address gender based violence

On Friday 23rd, at 4pm, PeaceWomen hosted our final lecture series on Women, Peace and Security, entitled, “After the High Level Review - Connecting Local and Global Action to Implement the Women, Peace and Security Agenda.” At the event, Former UN Women Peace and Security Chief, Anne Marie Goetz, reflected on how the Women, Peace and Security agenda is a political agenda which cannot be implemented without addressing militarised power structures. WILPF-Nigeria President and WILPF International Vice President Joy Ada Onyesoh shared a field-perspective that highlighted the importance of recognizing and supporting local women peace builders - such as the over 7,000 women WILPF Nigeria has trained in the last 2 years on using UNSCR 1325 to strengthen women’s economic empowerment and combat gun violence in their communities. Joy reminded the international community of the importance of recognising and strengthening women’s local work. 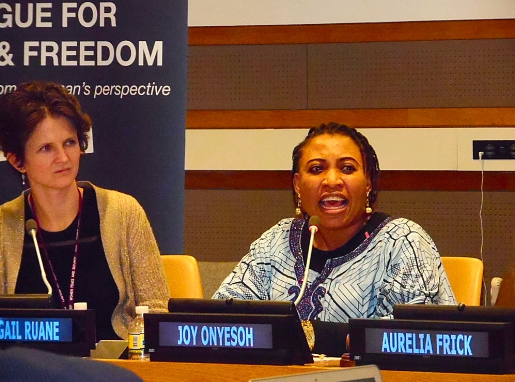 Happy and satisfied with the week, but sad because it was already over, the delegates headed home between Friday and Saturday. All in all, the outcome of the delegations’ meetings was very fruitful: they shared common concerns and strategized to work together to overcome them, always showing their passion and willingness to work on the Women, Peace and Security Agenda and to mobilise beyond anniversaries for peace. 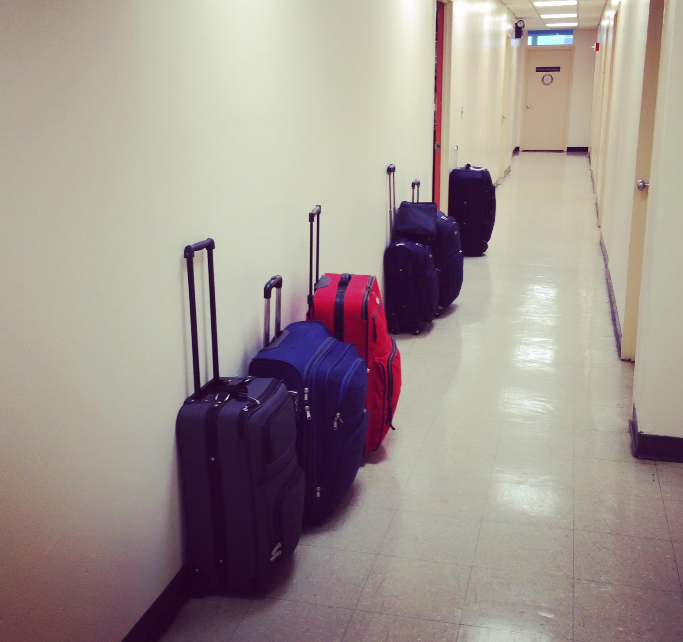 Visit the PeaceWomen website for more information on WILPF and other events and action surrounding the October 2015 Women, Peace and Security month and follow us on Facebook and Twitter to be a part of the action!