Violent extremism, militarization and arms proliferation continue to devastate communities from Sinjar Iraq to Chibok Nigeria, from Ferguson USA to Ilovaisk Ukraine, and in each and every street of Gaza Palestine. The news from Iraq is increasingly troubling. 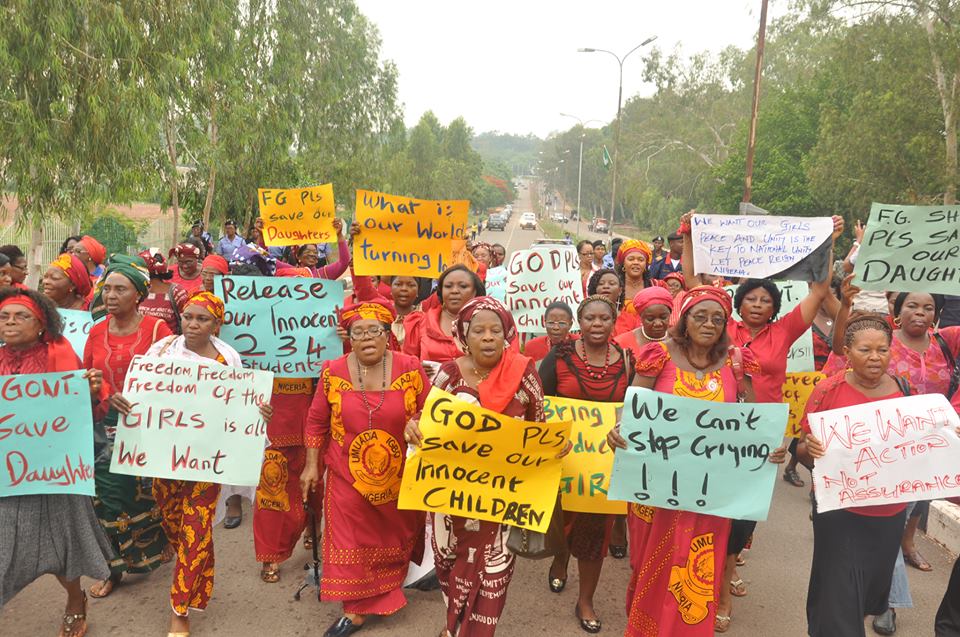 Those from the Yazidi community that have not been killed are forced to leave, stranded in the mountains without food and water, and there have been mass abductions and gross violations of women rights. ISIS is continuing to advance with disturbing violence including the targeting of women and girls.

The silence and the contradictions of the Women, Peace and Security agenda on prevention, profits and proliferation are very evident when stakeholders, particularly those in the international community, discuss the spectrum of violence in these different contexts.

In Gaza, Women, Peace and Security obligations have had limited consideration, simply no talk of women's participation is in the negotiations. WILPF and others have raised the gender questions and obligations in our work including in a recent open letter to the Security Council on Gaza. The usual gender resistance and response of “later” is echoed when obligations are raised. With the agreement of a cease-fire and indirect talks, accountability must be prioritized. Crimes and violations perpetrated in the last seven weeks must be investigated. This accountability should include who continued to support, fund and supply weapons to the parties. Ray Acheson discussed arms transfers and obligations in her recent piece, which called for the UK to end its role in Israel's humanitarian law violations.

We see this gender resistance and blindness in Ukraine where WILPF Secretary-General, Madeleine Rees, is on mission this week doing an assessment. There is a real and persistent gender bias among power holders and this is the core of what Women, Peace and Security must challenge to change the status quo. In a recent interview on mediation, I discuss how power is the bottom line, and how power holders, most often governments and armed groups, want to control the power dynamic, resources and discourse.

WILPF will be bring together doers, thinkers, advocates and decision-makers to examine these exact challenges at the

conference in April 2015. How can you, and we all together, focus on root causes, on prevention, and on the future of the women's peace community? Are you coming to La Hague in April? Register now to participate in the revolution! 2015 is an important year with key milestones in advance of the Security Council High-level Review on Women, Peace and Security, which will take place in October 2015. Underway now is the UN mandated Global Study in addition to the many actions, initiatives and events around the world. The Lead Author for the Global Study is Radhika Coomaraswamy who will hold numerous briefings, consultations and research papers. A special political advisory group has been created, which WILPF's Madeleine Rees is part of.

So with 2015 around the corner, we are asking what is the "call to action"? How can we address the silences of Women, Peace and Security? PeaceWomen calls for national debates on WPS/SCR 1325 where Member States hold parliamentary sessions on Women, Peace and Security. It is clear that implementing the WPS agenda including in the post-2015 agenda will continue to be an uphill battle. But civil society groups, including WILPF, must continue to press for implementation at national and local level, women's participation in the peace-making, mediation and negotiation processes to fully implement SCR 1325 and the WPS agenda.

This edition of E-News features the latest from the WPS Lecture Series, MENA Region, and the Security Council. It also includes news and resources from the UN Human Rights Council, Gaza, Cyprus, and Zimbabwe.

Women, Peace and Security- A Critical Component to the Post-2015 Development Agenda 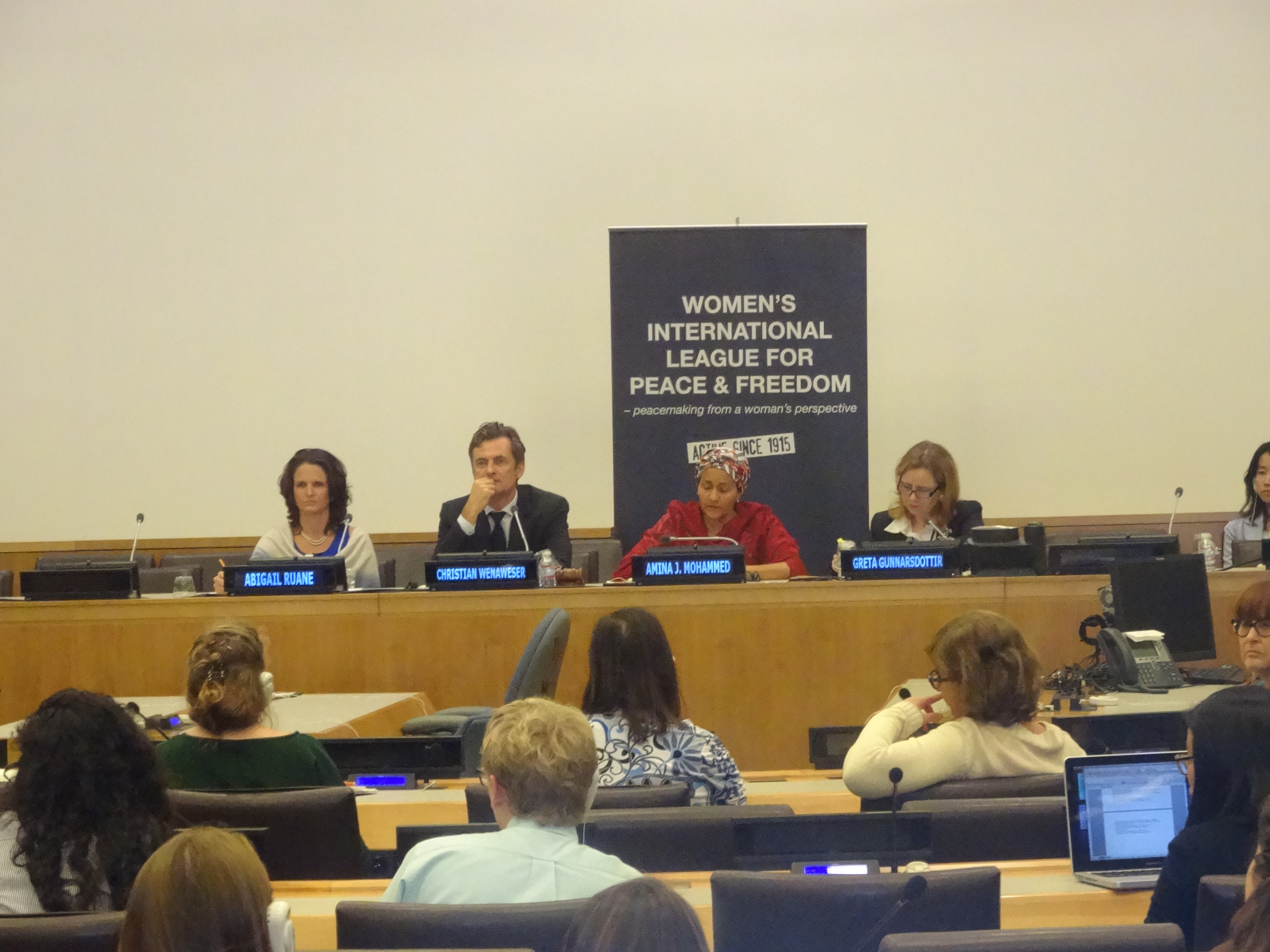 Amina discussed the recently released Sustainable Development Goals (SDGs) proposal by the General Assembly's Open Working Group (OWG) and underlined that the next steps will be critical. “We now have the ingredients,” she said, “now can we bake a cake?” According to Mohammad, the OWG proposal does contain the elements of a more peaceful and equitable world, addressing not only on extreme poverty, but an integrated agenda for social inclusion, economic transformation and protection of our environment, including for women and girls. She highlighted the importance of moving this proposal to action by ensuring strong means of implementation, unlocking resources, and continuing to engage civil society access in Post-2015 SDG processes from the local to the global levels. PeaceWomen Manager, Abigail Ruane reaffirmed support for addressing root causes of violence and conflict to promote sustainable development and peace; she pointed out the importance of strengthening social spending, reducing military spending, and ensuring accountability for nonstate actors as part of broader efforts to strengthen innovative financing and promote women's human security over militarized state security.

As discussions move forward it will be critical for civil society to continue to be present and for Member States to keep Women, Peace and Security elements in the post-2015 agenda.

Watch the video of the event here. 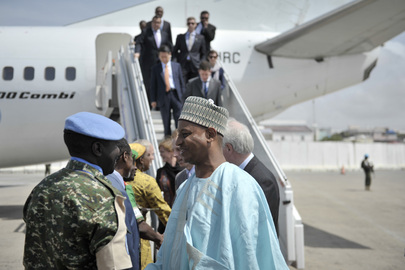 Lebanon, already with a history of conflict and civil war, has, recent years, seen a resurgence of militarism with the ongoing war in Syria spilling into its borders as Islamist rebels attack the Lebanese Army in Arsal. Due to this resurgence, European governments are now providing Lebanon with military aid and money to stop rebels' advance deeper into Lebanese territory.

WILPF has a section in Lebanon, and, since early 2012, has also worked with the ABAAD - Resource Center for Gender Equality in Lebanon to lead the national consultation process on Women, Peace and Security, and to identify and map women's issues and concerns that relate to the policy of UNSCR 1325. 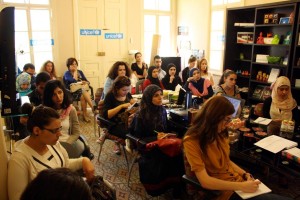 In Lebanon, women are still far from acting as true partners in decision-making processes and in political life due to the entrenched patriarchal norms and practices combined with the deep-rooted sectarian system. Women's social, economic and legal status is still weak, with prevailing injustice, marginalization, and prejudice.

Despite these huge challenges, the recent developments and spillover of Syrians displaced into Lebanon has the potential to serve as a window of opportunity to enhance women's roles in society in times of conflict. One of the most recent publications of ABAAD has shed a light on the changes in gender roles of Syrian women due to displacement. It found that many women now have more active roles in decision-making within their households. Moreover, it has been observed that many INGOs have been keener to incorporate gender sensitive initiative, in additions to ones that aim at enhancing women's participation in decision-making.
Faced with this mounting instability, WILPF's work supporting grassroots activism against militarism becomes even more important. WILPF's current work with our Lebanese partners include more national consultation, which will focus on discussing existing specific challenges and opportunities facing women's participation in reform processes and on-going political transformations; as well as targeted visits to relevant stakeholders. These efforts will ultimately feed into a process towards a Lebanese draft National Action Plan (NAP) that will be the first effort in the Lebanese context aiming to incorporate the issues addressed in UN resolution 1325 within the national agenda; ultimately aiming at having these standards turned into policies that support women's right and participation.