This 132 edition of PeaceWomen ENews features updates on PeaceWomen's NAP initiative, csw 56, the 16 Days Campaign, and women, peace and security news, events and resources from peacewomen.org

This month, WILPF sections and members around the world celebrate the end of our collective participation in the 2011 “16 Days of Activism to End Violence against Women Campaign”. WILPF's participation in this year's campaign was powerful. From Kinshasa to Geneva to Bogotá, WILPF 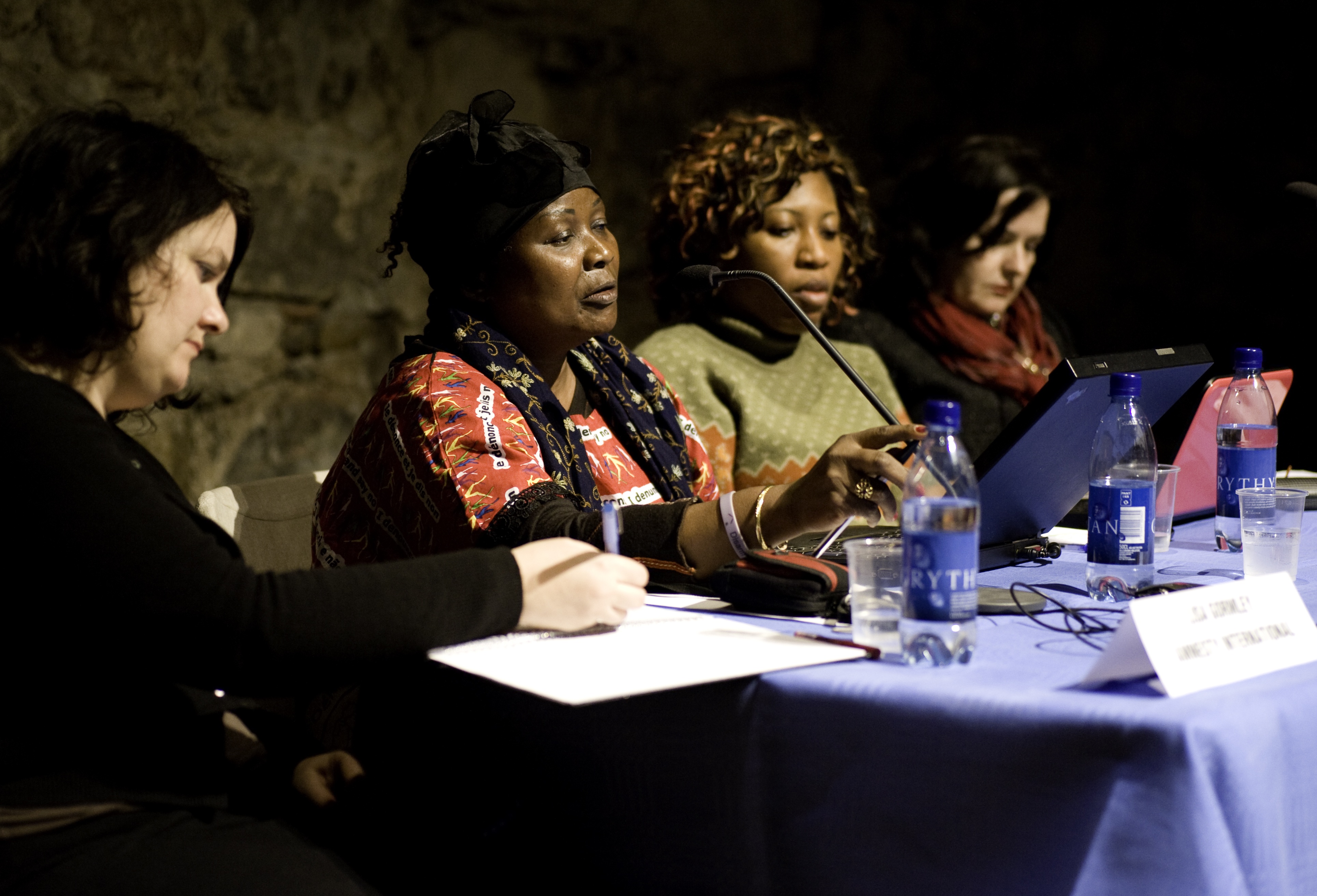 sections successfully organized and participated in a variety of inspiring and strategic activities united in challenging militarism and violence against women . WILPF DRC was one of 17 national sections that took part in the campaign. Our WILPF sisters in DRC bravely went ahead with their seminars despite serious security concerns linked to pre-election violence and unrest. The seminars brought together many grassroots activists, WILPF members, and legislative candidates. At this critical time, WILPF sections around the world stand in solidarity with our sisters in DRC in the hopes of a post-election period free from intimidation, violence and instability.

December 10 also witnessed the official presentation of the Nobel Peace Prize to its three 2011 female recipients: Leymah Gbowee, Ellen Johnson Sirleaf (Liberia) and Tawakkol Karman (Yemen). WILPF applauds these women as we continue our work to promote gender equality and women's participation in all forms of conflict prevention and peace-making.

As part of the 16 Days, I have participated in two pioneering WILPF seminars this month. The first was in Geneva on December 1-2 where International WILPF hosted a two-day meeting with legal experts. The second was in Stockholm on December 5-6 where WILPF-Sweden hosted a seminar on impunity and national responsibility.

The Geneva conference brought together experts of different branches of international law to discuss new strategies and advocacy opportunities to advance the protection and promotion of human rights. The participants were challenged and the conversations were creative but unrefined. It was an honor to exchange ideas and learn from people like Madeleine Rees, Christine Chinkin, Widney Brown and Felicity Hill!

The Stockholm seminar was another success for WILPF-ers in Sweden and Josefine Karlsson, current head of WILPF-Sweden office. The seminar had participation from representatives from WILPF-Nigeria, and WILPF-DRC also. 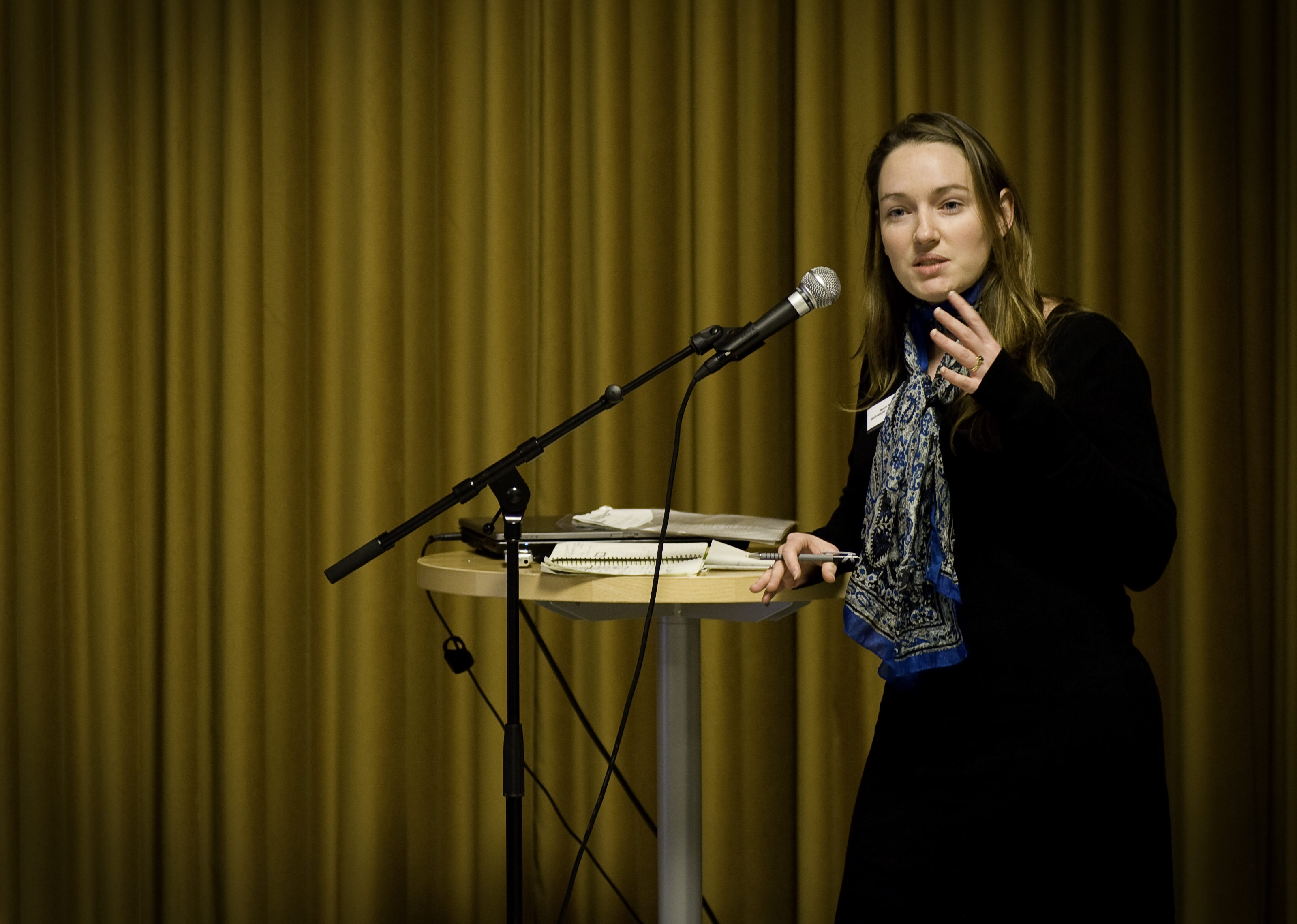 PeaceWomen/WILPF is also pleased to announce that is has started a UNSCR 1325 National Action Plan (NAP) Initiative (details in article below).

This PeaceWomen Enews, as always, compiles the latest Women, Peace, and Security news from around the world. In the past month, several news reports have come out of the Middle East and North Africa regarding women's political participation in the Arab Spring. Elections in Tunisia, Egypt, and eventually Libya hold promise for women's rights. However, vigilance on behalf of the international community is required to ensure that all people have free and equal access to government. News of women's issues from Afghanistan reveals a dismal record for political empowerment of women and their inclusion in peacebuilding. PeaceWomen and WILPF vocalizes our strong support for women's groups in Afghanistan and demand that women's rights are fully realized and incorporated in the peacekeeping and peacebuilding framework.

Finally, as we come to the end of 2011, I would like to extend my sincere thanks to all our friends, partners and team members. PeaceWomen and WILPF are so grateful to the dedicated and committed interns who have helped us with every aspect of our work.

Peace to all as a new year dawns! 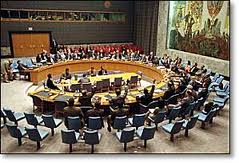 Resolution 2021 on the DRC contained 4 references to WPS with a general focus on Sexual and Gender-based Violence and protection of human rights.

Commission on the Status of Women

The next UN Commission on the Status of Women (CSW 56) will take place from 27 February to 9 March 2012 on Priority theme: “The empowerment of rural women and their role in poverty and hunger eradication, development and current challenges”.

WILPF International submitted a written statement noting, “For nearly a century, WILPF has concentrated on the links between gender inequality, socioeconomic injustice and the root causes of war. Since the last CSW, women from around the world convened for the WILPF International Congress in San José, Costa Rica (July 30-August 6, 2011) to reaffirm our position and refocus on work to prevent conflict and insecurity through advancing the rights of all.

The statement focuses on theme of CSW 56, “the empowerment of rural women and their role in poverty and hunger eradication, development, and current challenges”, and draws particular attention to cross-cutting issues: participation; land rights and access; indigenous rights; natural resources; food security, and the particular challenges and impacts of disasters, conflict and insecurity on the lives of rural women. The statement underlines that “rural women are often subject to particular rights' violations, exclusion, isolation, and poverty, and are acutely affected by natural and man-made disasters including economic crisis, climate change, militarization and conflict”. To draw attention to some common themes, the WILPF statement highlights cases from our national sections, which exemplify the complexity and range of challenges facing rural women.

Fiona has been an active member of the Australian WILPF section in Melbourne, where she studies Law and works for the Asylum Seeker Resource Centre. She has worked in media capacity building in the developing world at newspapers in Cameroon and Nepal, and taught English in India and Cambodia. She holds a degree in International Studies and has an interest in women's rights, labour and human trafficking. She is posted in New York for three months to work with peacewomen at the UN office.

Isabelle is returning to PeaceWomen/WILPF after working with ally organization, the NGO Working Group on Women, Peace and Security. She currently splits her time between WILPF and Human Rights Watch as a consultant. With somewhat of a third foot in business management, Isabelle also helps manage a cafe on the upper west side of Manhattan. Originally from Ithaca, NY, Isabelle graduated magna cum laude from Cornell University with a bachelor's degree in Government and minors in International relations and European studies. Keen to branch out of her home town, Isabelle pursued studies in Germany and Switzerland and worked with youth organizations in Macedonia and Tanzania. Isabelle will be returning to school in the fall of 2012 for her Juris Doctor degree.

16 Days of Activism on

WILPF's mission, values, and strategy were particularly related to this year's 16 Days Campaign theme, “From Peace in the Home to Peace in the World: Let's Challenge Militarism and End Violence Against Women!”

Given the direct link between this year's 16 Days theme and WILPF's work and vision, commitment and participation in the 2011 campaign was incredibly powerful. From Kinshasa to Geneva to Bogotá, WILPF sections successfully organized and participated in a variety of inspiring and strategic activities, all uniting to "challenge militarism and violence against women at home and during conflict”. Success was reported among from our 17 WILPF sections around the world (in all regions) who participated in the campaign. 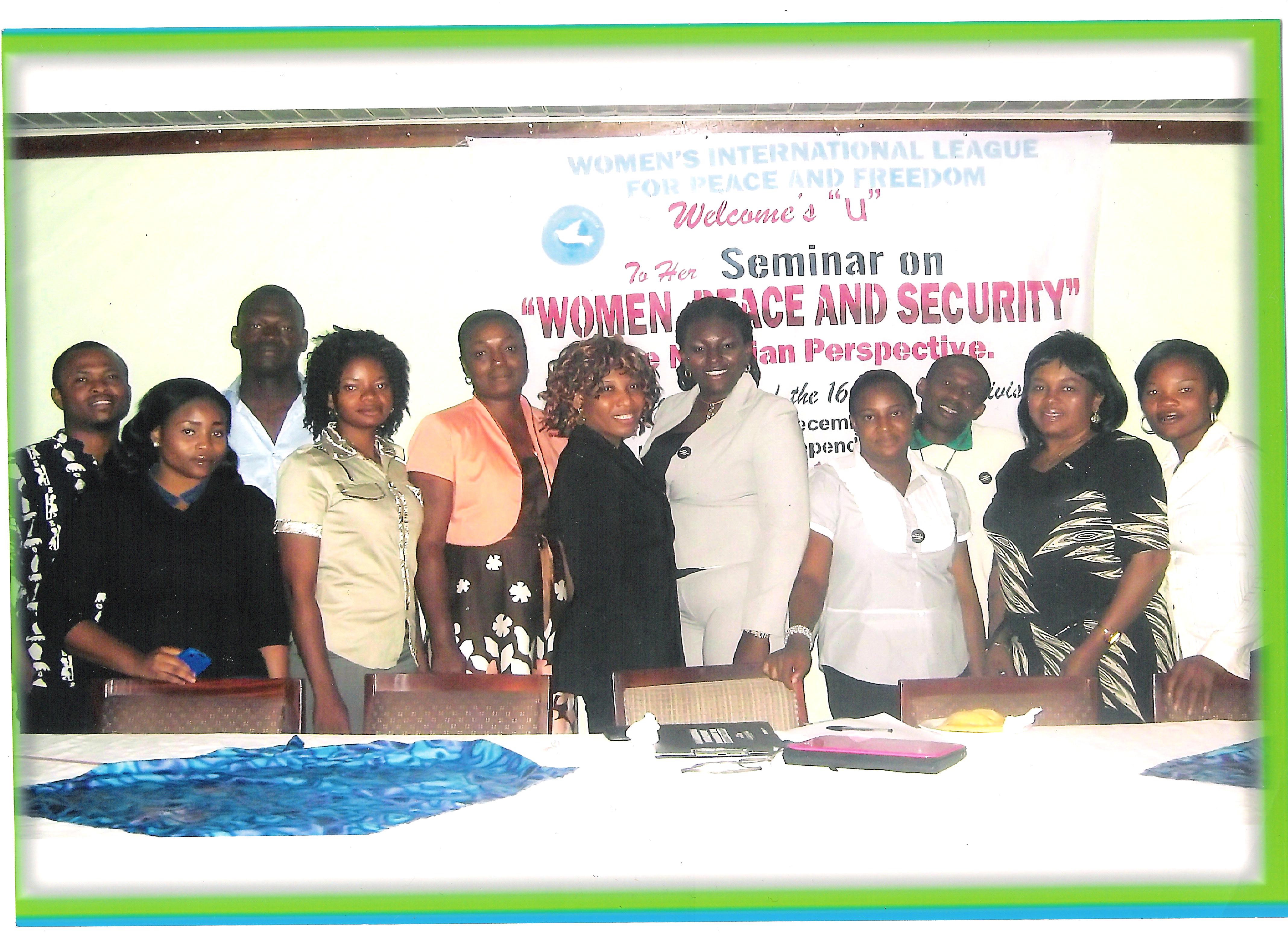 Activities in the DRC where, despite the threat of violence, the newest WILPF section displayed courage in addressing women's issues and peace. This section held seminars regarding women's empowerment and violence against women. Many participated in these seminars including WILPF members, candidates for political office, and local women committed to creating peace in their communities long disturbed by violence.

WILPF-NIGERIA, pictured here, reported a lively discussion on the topic of women, peace, and security.

Protection of Civilians in Conflict, 9 November

On November 9 2011, the Security Council, under the Presidency of Portugal, held an Open Debate on the thematic agenda item: Protection of Civilians (PoC) in Armed Conflict. Consistent with recent PoC debates just over a third of the statements, or 20 out of 48 made explicit reference to gender. The Council did not adopt an outcome document. Receiving critical attention with regard to gender was the need to recognize and combat the increasing prevalence of Sexual and Gender Based Violence (SGBV) in conflict. Here, several countries including the US, Germany, Portugal, and Sri Lanka reiterated the need to mainstream gender perspective and training into all UN prevention, mediation, and peacekeeping efforts and to increase efforts to ensure justice for victims of sexual violence in conflict (SViC).

Regarding SViC at Security Council level, Germany noted and praised the commencement of the Security Council's new monitoring and reporting arrangement on SViC. France called for the systematic inclusion of sexual violence as grounds for Security Council endorsed sanctions. Drawing a parallel between lack of respect for International Humanitarian Law and Human Rights Law and the prevalence of violence against women in conflict, several speakers including Phillip Spoerri of the ICRC and representatives of Honduras, Canada, the EU, and Luxembourg noted that more could be done by the Security Council in this area and emphasized the need to strengthen accountability mechanisms such as the International Criminal Court. Read Full summary

On the 30th of November the Security Council convened to discuss progress, and challenges linked to its current Working Methods. Although the debate saw a high number of speakers take the floor, references to the women, peace and security agenda were seldom heard with only 5 from 40 speakers making gender references. Countries mentioning gender included the US, Belgium, Australia, Germany and Finland, with all five focusing on the increase and the need to further augment Security Council interaction with Special Representatives on gender and sexual violence, UN Women and the Peacebuilding Commission. In addition, the US emphasised how The Group of Friends of Women, Peace and Security is able to inform the Council's actions through inclusive and transparent dialogue between Council and non-Council members. Finally, Australia called on the Council to issue a standing invitation to the Executive Director of UN-Women and the Special Representative of the Secretary-General on Sexual Violence in Conflict to attend all meetings and debates. Read Full summary

PeaceWomen/WILPF is pleased to announce that we have started a UNSCR 1325 National Action Plan (NAP) Initiative. This initiative will join PeaceWomen's website as another tool for information sharing, awareness raising, and advocacy.

The NAP initiative will provide a comparative analysis of the 32 SCR 1325 NAPs, showcasing the many methods available to national stakeholders as they develop new, or evaluate and revise existing action plans. PeaceWomen/WILPF will highlight good practices at the national level both in the content of NAPs as well as the process through which the NAPS were developed. As a web-based platform, the NAP initiative will allow individuals to search existing NAPs for their priority areas, including policy themes of prevention and disarmament, as well as policy implementation practices for budgeting allocation and civil society involvement. The benefit of such an approach to information sharing lies in its ability to be translated into actionable guidance for government and civil society actors. It can similarly be leveraged by CSO actors to hold their governments accountable to implement laws and stated commitments. Furthermore, analyzing and providing this information raises awareness of the women, peace and security resolutions with the people who can ensure their effective implementation on the ground.

PeaceWomen/WILPF is particularly excited to take on this initiative in the context of WILPF's engagement in the NAP processes of Sweden, Australia, the DRC, and most recently the U.S. WILPF sections. Other CSO actors are encouraged to share their experiences and provide feedback over the course of developing this initiative. This initiative ultimately aims to support and strengthen CSO' capacity to engage in NAP processes.