Looking Ahead: the Women, Peace and Security Agenda in 2019 and Beyond

October 2019 marks the 19th Anniversary of UN Security Council Resolution 1325 and the Women, Peace and Security (WPS) Agenda - that historic moment when the highest security body in the world recognised that women and gender issues were part of peace and security.

This year, the focus of the annual Security Council Debate is on accountability, which is sorely needed. Under the presidency of South Africa, Security Council members are negotiating an outcome in the Council. Yet today what is missing is not words, but action. Further, as we saw in April, attacks on women’s rights, including sexual and reproductive rights, as well as blocks on other issues from women human rights defenders to disarmament threaten to undermine the holistic nature of the WPS agenda.

Nineteen years after the creation of UNSCR 1325, are we doing what it takes to deliver for women and girls in conflict?

Accountability requires that the international community take a long, hard look at what being a “champion” of WPS looks like. It requires that allies be brave in demanding a higher bar for action. It requires taking political risks and being courageous in pushing aside obstacles to women’s leadership and rights in particular country situations. It requires discarding the medieval paradigm of military security for states, and shifting instead to human security and justice for people and planet.

Join us in demanding that the international community step up!

WILPF During WPS Week: Our Delegation and Events!

Next week, women peacebuilders and human rights defenders from around the world will come to New York for the 29th October Security Council WPS debate to continue to mobilise and organise for action. WILPF activists will join from Colombia, Syria, Lebanon, and the Korean Peninsula. Women will be looking to the Security Council to prevent roll-back of gains, and accelerate holistic action for accountability by taking bold action for peace based on women’s leadership and rights.

WILPF will support a number of discussions focused on accelerating accountability on specific country situations. We will also hold a internal WILPF dialogues aimed at connecting, cross-learning, and strategising on how to strengthen our collective work for feminist peace around key upcoming opportunities at local, national and international levels.

Read about our events during WPS week on WILPF’s WPS 2019 page! 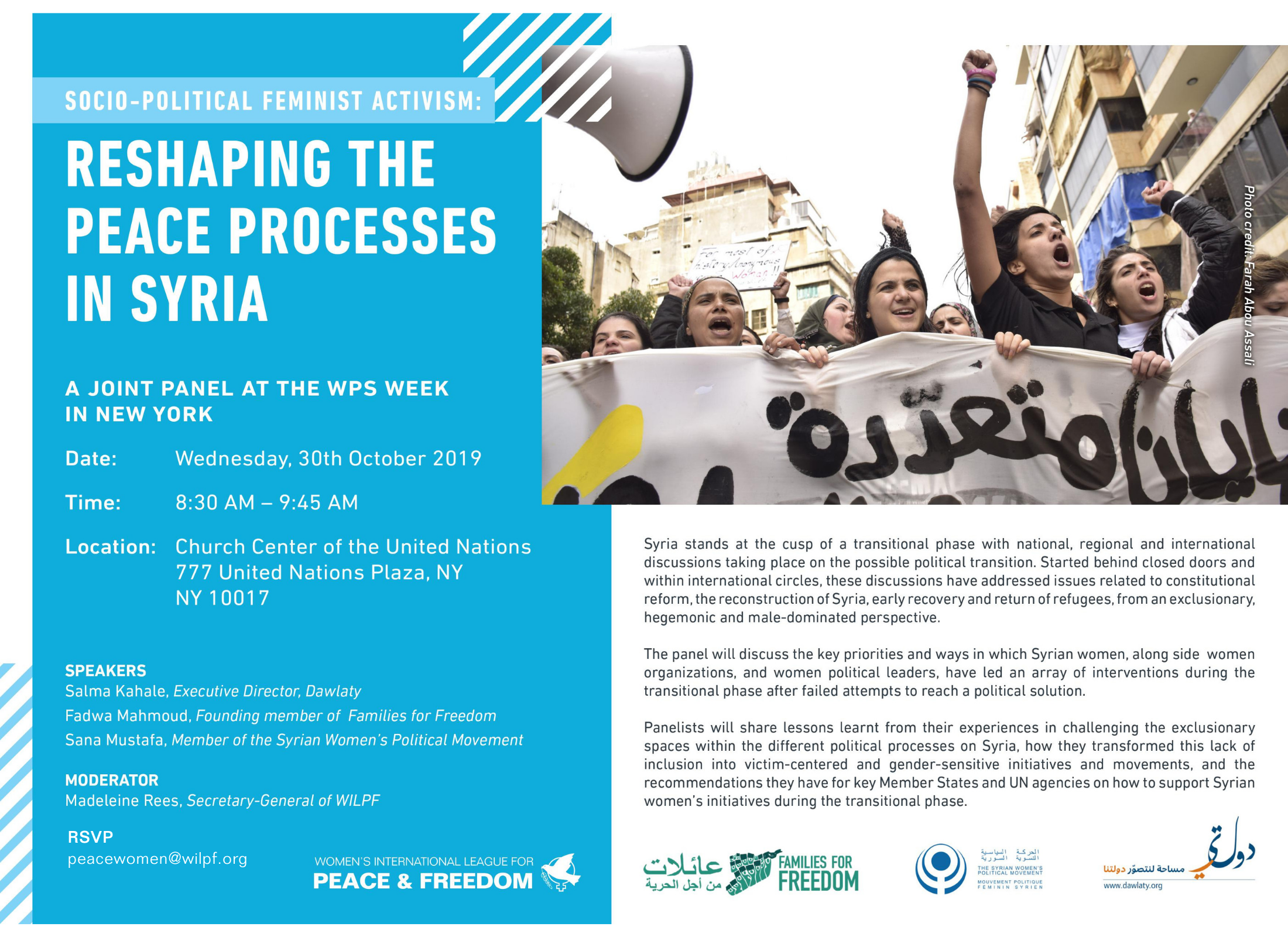 NGO Working Group on Women, Peace and Security: Open Letter to Members of the Security Council

Our coalition, the NGO Working Group on Women, Peace and Security, has published an Open Letter to members of the Security Council, calling for holistic action on implementation that accelerates accountability and does not undermine the agenda.

The letter includes five key messages for Member States and Security Council members, to which we urge them to commit full political support:

WILPF Analysis of the Annual Report of the Secretary-General on Women, Peace and Security

Every year, the UN Secretary-General’s report on WPS tracks the progress made on the implementation of the WPS Agenda. In 2019, the UNSG WPS report builds on an independent assessment of the WPS recommendations and commitments made at the three peace and security reviews in 2015 -- the review of WPS (“the Global Study”), peacebuilding (“the AGE Report”), and peace operations (“the HIPPO Report”).

This year’s report recognises that “there remains a stark contrast between rhetoric and reality, where previously agreed commitments have not been matched by action” (para. 5). It notes that of the 30 recommendations put forth by the 2015 peace and security reviews, only 50 percent have progressed; 40 percent have inconsistent implementation or need further progress; and 10 percent have either gone backwards or have not progressed at all. Further, of the 30 recommendations, only 2 have been fully implemented.

In the backdrop of these developments, the Secretary-General urgently calls for a holistic implementation of the WPS Agenda as well as an approach that prioritizes root cause analysis and conflict prevention. The report affirms three key factors as essential to successful implementation: 1) consistent prioritization and resourcing for gender equality and WPS, 2) mechanisms for tracking, monitoring, and overall accountability, and 3) presence and influence of gender expertise at senior levels.

Read the full report, the concept for this year’s debate, and WILPF’s post-debate monitoring.

Explore our Database of 1325 National Action Plans and Member State Commitments to Women, Peace and Security! 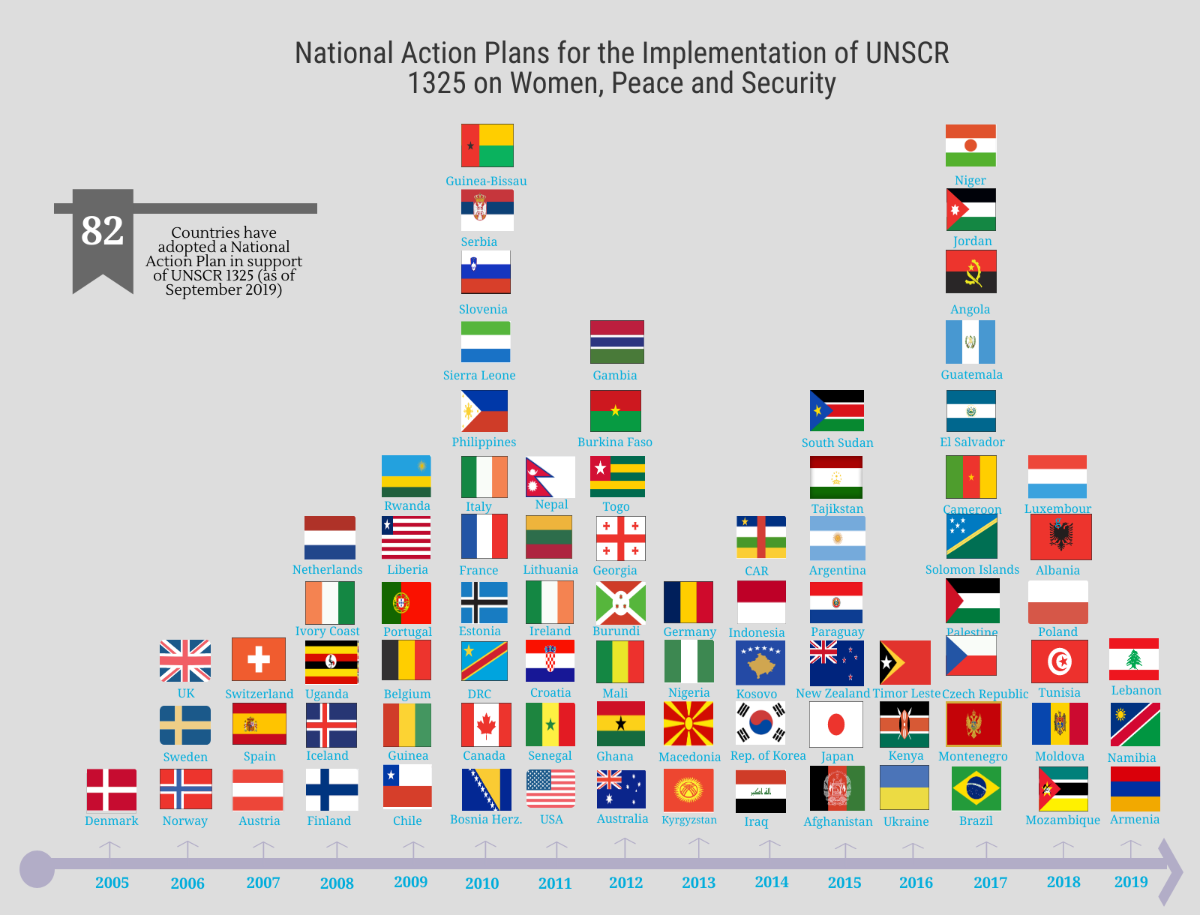 Going beyond global commitments to local action is a crucial part of accountability. UNSCR 1325 National Action Plans are an important mode for WPS implementation both on the national and international levels. As of October 2019, WILPF analysis shows that 82 UN Member States (42% of all UN Member States) have UNSCR 1325 National Action Plans (NAPs). Several NAPs have been announced over the course of 2019. Norway launched its 2019-2022 NAP in January 2019. In February 2019, Armenia finalised its first NAP, and in April 2019, Namibia announced its new NAP. Additionally, at a high-level WPS Commitments event held on 23 April 2019, nine Member States committed to developing their first-ever NAPs in advance of October 2020. Finally, the United States published its strategy on Women, Peace and Security in June 2019, with an implementation plan to follow. The most recent first NAP was adopted on 12th September 2019 by Lebanon.

Explore WILPF’s NAPs database, with our analysis of each country’s plan and their commitments to Women, Peace and Security.