Over 200,000 people have been killed over the past twenty years in a war that Afghans did not ask for. And although US and NATO troops have withdrawn, the situation remains precarious for millions of people who still face violence due to their political, ethnic, or religious affiliation, a destroyed environment, Taliban rule, and a humanitarian crisis. Hundreds of thousands of people have fled the country just in recent weeks, and many more are internally displaced and remain in this new reality.

Afghan women human rights defenders and peacebuilders have drawn attention to the deteriorating situation in Afghanistan for years, particularly in their briefings to the UN Security Council and in their national level advocacy, and since the start of intra-Afghan talks last fall, they have done this at dramatically increased risk to their safety. They have repeatedly urged member states, UN officials, and others with influence to act to protect human rights and sustainable peace before the situation became worse. Their calls have largely been ignored and today is a testament to that.

Strong, united leadership from the international community is more vital than ever for peace. On 30 August, the Security Council passed resolution 2593, which “reaffirms the importance of upholding human rights including those of women, children, and minorities”, and  “encourages all parties to seek an inclusive, negotiated political settlement, with the full, equal, and meaningful participation of women”. The Council and the UN must build on this recognition with concrete, gender-responsive action, and cannot abandon Afghans at this dire moment.

We have been engaged in extensive rapid response work and advocacy on Afghanistan. Below are a series of recommendations, focused on implementation of the Women, Peace and Security agenda and derived from public and private briefings from Afghan women leaders.

Renewal of the United Nations Assistance Mission in Afghanistan

Peace Process: Work for an immediate, permanent, and comprehensive cessation of hostilities, followed by an inclusive, negotiated peaceful settlement that prioritises the implementation of the UN Security Council Resolutions on Women, Peace and Security and Protection of Civilians, and human rights obligations.

Further Reading
WILPF Blog on Members' Evacuation from Kabul (September 2021)
The Afghan people deserve peace and justice (August 2021)
Afghanistan: Joint call for an immediate end to attacks against human rights defenders and need for protection and accountability (May 2021)
Submission to the Committee on the Elimination of Discrimination Against Women - Afghanistan (2020)

Our Monitoring of National Action Plans 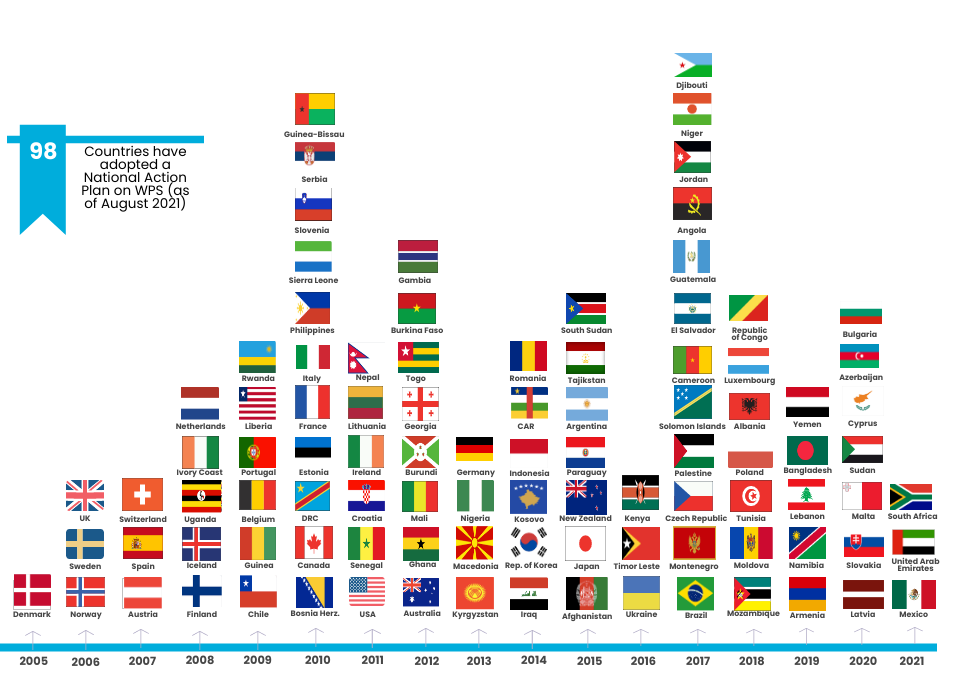 As of September 2021, our analysis shows that 98 member states (51%) have adopted at least one National Action Plan (NAP) to implement the Women, Peace and Security agenda.

NAPs at a glance

We have been monitoring the development of NAPs for many years, and publish breakdowns of each NAP on our dedicated monitoring site. On this site, we also feature the work of WILPF members who are advocating for, developing, implementing, and monitoring NAPs in their own countries.

Recent examples of NAPs analyzed include Palestine, Sudan, Uganda, Lithuania and Japan.  See our NAP database for our analysis. If you know of a NAP that is not available on our site, please contact us at peacewomen@wilpf.org.

Our coalition, the NGO Working Group on Women, Peace and Security, has published its annual open letter, signed by over 370 organizations from 88 countries. This year, the letter is focusing on the very timely issue of protection of women human rights defenders and civil society leaders. The key recommendations to member states include:

The Office of the High Commissioner for Human Rights has released a report on mainstreaming the rights of women and girls in conflict and post-conflict situations in the work of the Human Rights Council.

WILPF has advocated in particular for root causes, structural gender discrimination and inequality, human rights defenders, and arms and militarism to be reflected in the report’s recommendations. As a result, some of the gaps identified in the report include the need for the Human Rights Council to consider the impacts of the diversion of arms, the gendered impacts of the explosive weapons in populated areas, expressions of violent masculinity, and abuses by private security companies.