Editorial: Let There Be Light: Reflections on Women Peace and Security, 17 years on 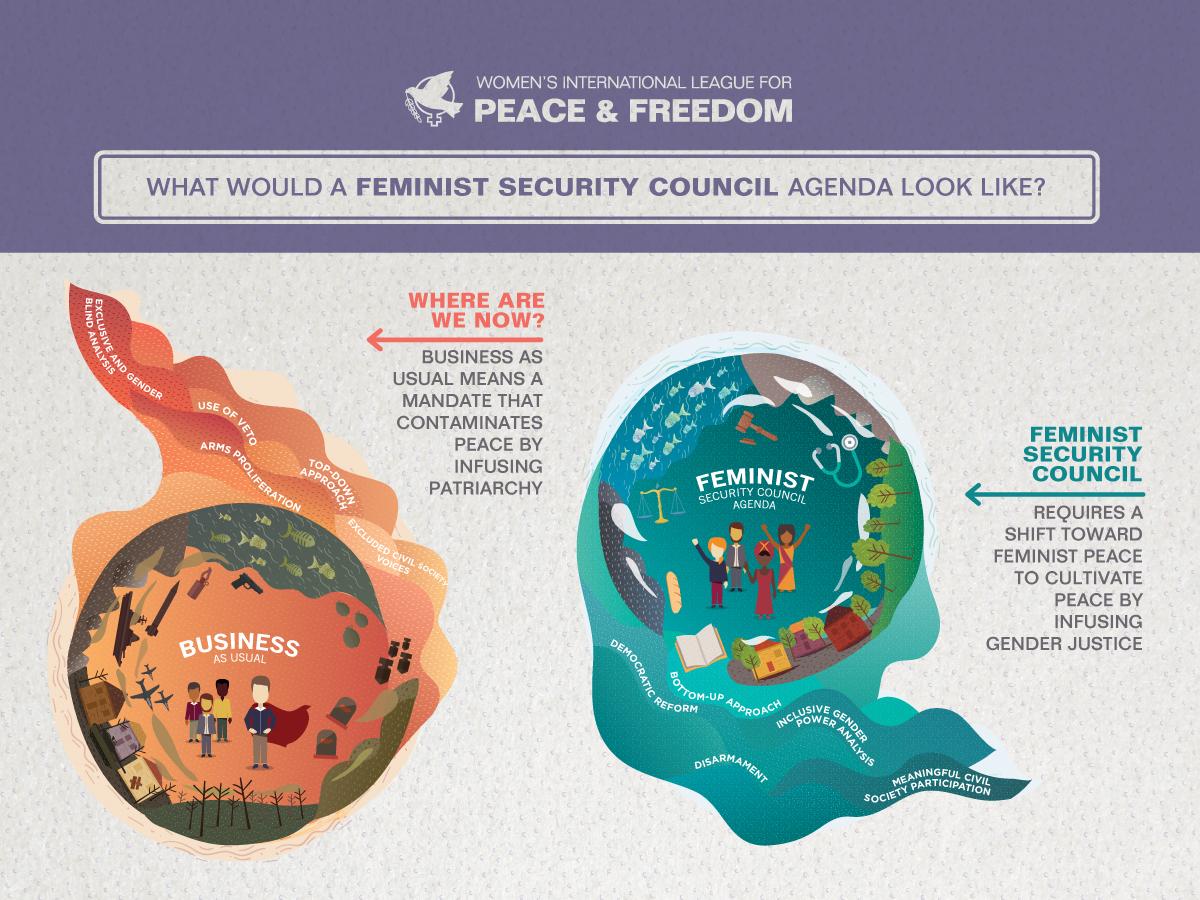 Today scientists know that only about 5% of our universe is visible. In fact, 95% contains what scientists call “dark matter” or “dark energy” – stuff we cannot see using sensors of visible light. Despite being “invisible”, this has a huge impact: dark matter shapes the rotation of galaxies, the formation of galaxy clusters, and has been instrumental in the development and future of our universe.

Today, the international community is still grappling with the implications of how recognising the presence of women and gendered power requires a dramatically different understanding – and action – around the international peace and security universe.

At the 17th anniversary of UNSCR 1325 in October this year, it became clearer than ever that traditional approaches focusing only on men and militarism are missing the substance of what is being done on peace and security. WILPF’s peace activist delegation to the anniversary of UNSCR 1325 came to New York from Bosnia, Colombia, Nigeria, Libya, Palestine and Iraqi-Kurdistan to shed light on their experiences of leadership, violence, conflict resolution and community-building: In Colombia, women are building networks of women leaders, providing aid to victims of violence, and raising the bar for what is meant by peace, even in the territories outside of the cities where there is an absence of the state. In Nigeria, women are developing networks that recognise gendered early warnings of violence and work to prevent and address outbreaks. In Syria, women’s leadership in Track III peace processes has been quietly picking up the pieces through peace initiatives at the local level in the wake of widespread devastation and failed Track I initiatives. In Libya and Bosnia, women are demanding that state action raise the bar – whether by ensuring women’s participation and rights are central to state-developed roadmaps for peace, or demanding that International Financial Institutions (IFIs) support economies of care and justice.  As one WILPF delegate to 1325+17 commented: “We are strong. There are very few hurdles that we cannot overcome.”

Around the world, women are taking on functions traditionally ascribed to the state: providing education, community services, crisis response and collective security. They are doing so despite devalued and unpaid care work, without tax revenue, whether or not the state fulfils its duties, and outside of the spotlight ascribed to men and military security.  As WILPF Secretary General Madeleine Rees stated at last week’s Friends of 1325 and Friends of Sustaining Peace meeting: “It is not a question of women in the peripheries, but as central throughout the process”.

We cannot go back to thinking that men and militarism are the centre of peace and security, any more than we can go back thinking that the earth is at the centre of our solar system, or that only visible matter shapes our universe.  As one WILPF delegate stated, “It is powerful to share stories of women’s truth”.

The time is now to recognise the presence of women’s lives and gendered power, and put local women’s work for nonviolence and justice at the centre of international peace and security work.

Local-to-Global: WILPF’s Week At The 17th Anniversary of UNSCR 1325 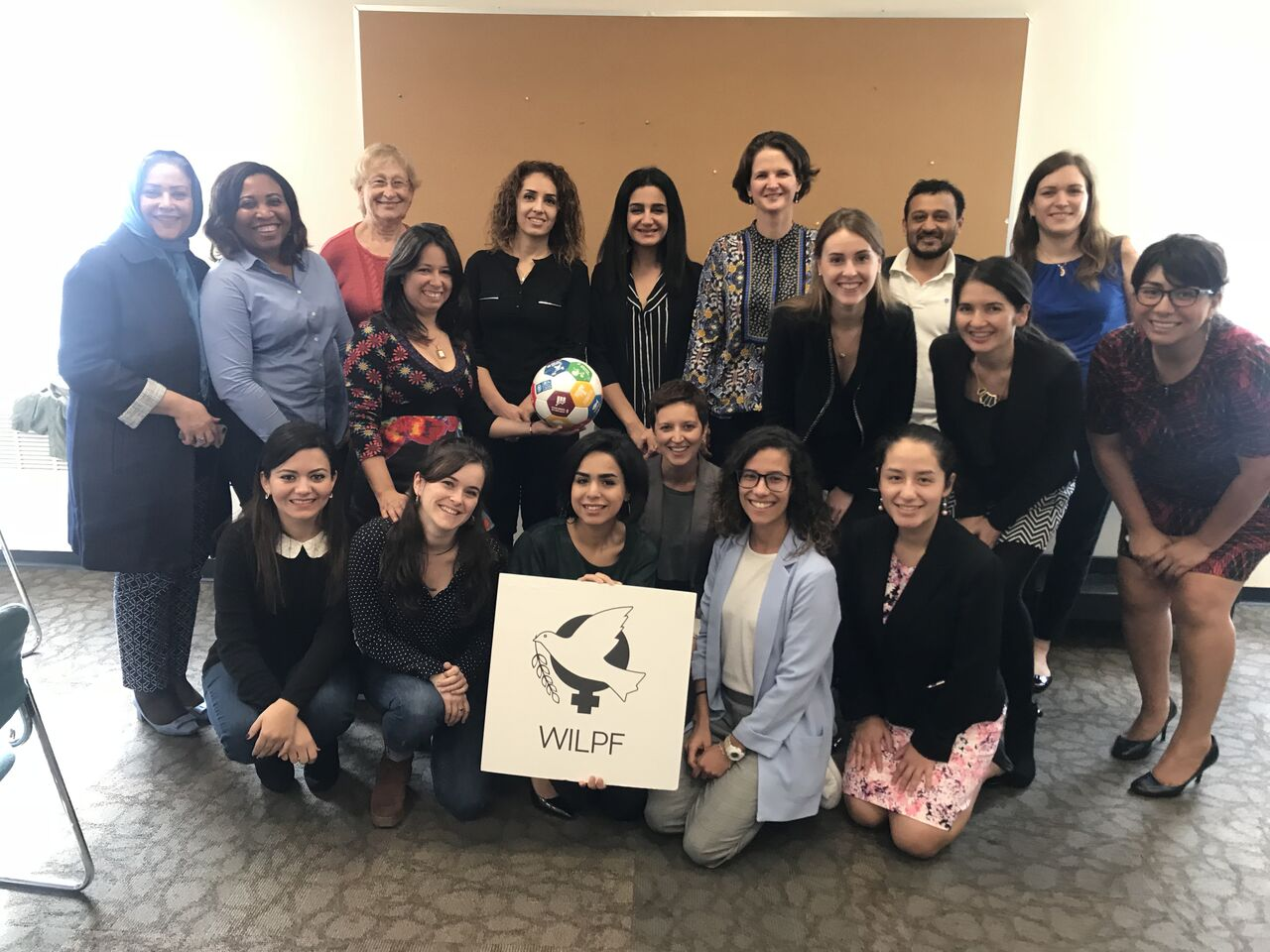 This October marked the 17th Anniversary of United Nations Security Council Resolution (UNSCR) 1325 and the broader Women, Peace and Security (WPS) Agenda. Although France, the President of the Security Council in October, failed to share a date for the open debate until the very end of September, and did not publicise a concept note for this debate until a few days before it took place, civil society persisted. Together, we were able to leverage the UNSCR 1325+17 anniversary for action!

During the week, WILPF hosted a delegation of women peace leaders from Bosnia, Colombia, Iraqi Kurdistan, Libya, Nigeria, Palestine and Spain and engaged in a variety of events and engagements. Activists shared recommendations around working towards feminist peace in their local contexts. They exchanged experiences with each other on building a stronger feminist movement for peace, human security and gender justice. They called for concrete action to ensure women’s meaningful participation that goes beyond women’s access to impact. Together, they demanded a transformation of top-down, exclusive, militarised processes towards bottom-up, inclusive and gender-aware action.

Read the full blog, with links to event summaries, products, and analysis around WILPF’s engagement at the 17th Anniversary of UNSCR 1325 here>>

Inside the UN Security Council: WPS Open Debate and Advocacy 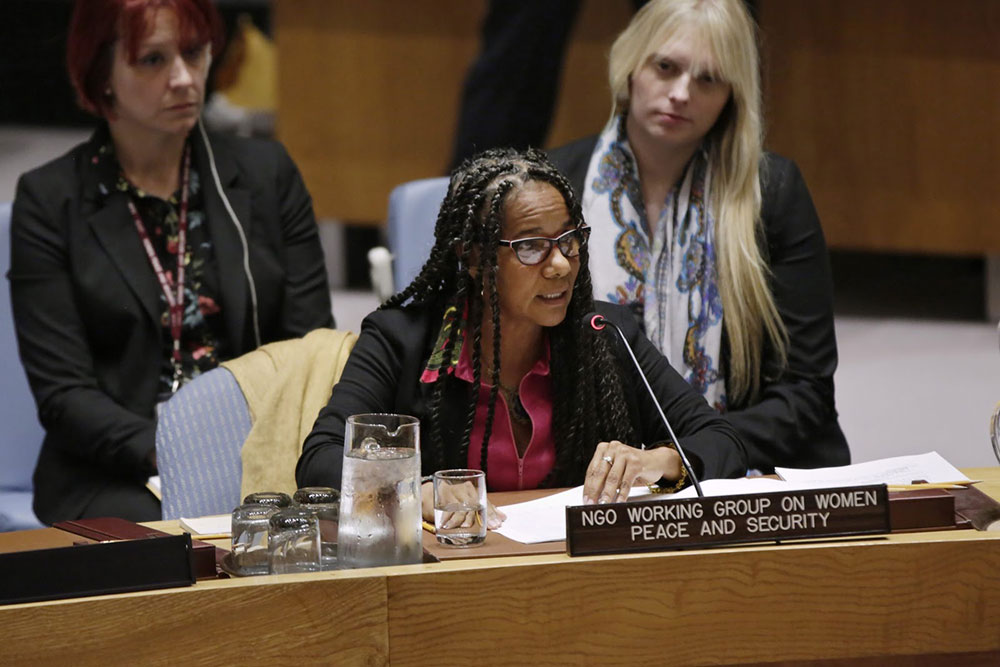 Charo Mina-Rojas, a member of the human rights team of the Black Communities’ Process, the Afro-Colombian Solidarity Network, the Black Alliance for Peace, and the Special High Level Body for Ethnic Peoples, addresses the Security Council’s open debate on Women, Peace and Security (Photo: NGO Working Group on WPS).

On 27 October 2017, the 17th annual Security Council Open Debate on Women, Peace and Security (WPS) was held under the Presidency of France. The concept note for the event was circulated a day before the debate, calling Member States to reflect on WPS implementation in the past 17 years and highlight concrete actions for strengthening the Agenda at all levels, with a special focus on women’s meaningful participation in the prevention and resolution of conflicts.

WILPF worked with our coalition the NGO Working Group on Women Peace and Security to support Charo Mina-Rojas from Colombia as the civil society speaker. In her civil society statement, Ms Mina-Rojas called for increased support for diverse women, including indigenous women, and for strengthened support for demilitarisation and disarmament. “Colombia risks wasting this opportunity for peace if it does not completely disarm itself and if the communities most impacted by the internal armed conflict, including women human rights leaders and activists, continue to be ignored in the implementation of the Peace Accord”, said Ms Mina-Rojas.

The speakers at the debate agreed that real progress in women’s meaningful engagement in peacebuilding and their protection from sexual violence were seriously lagging. Many speakers urged for more gender expertise across all UN activities and called for deepened consultations with civil society organisations. However, crucial issues for the WPS Agenda, such as financing and disarmament, did not receive enough attention. Moreover, the underlying reasons for violence against women and women’s marginalisation, which stem from patriarchal and militarised political economies, were not addressed.

Find the Implementation and Commitment Record from the Security Council’s Open Debate on Women, Peace and Security here>>

Reporting from the Geneva Convening: Strengthening Synergies for Action 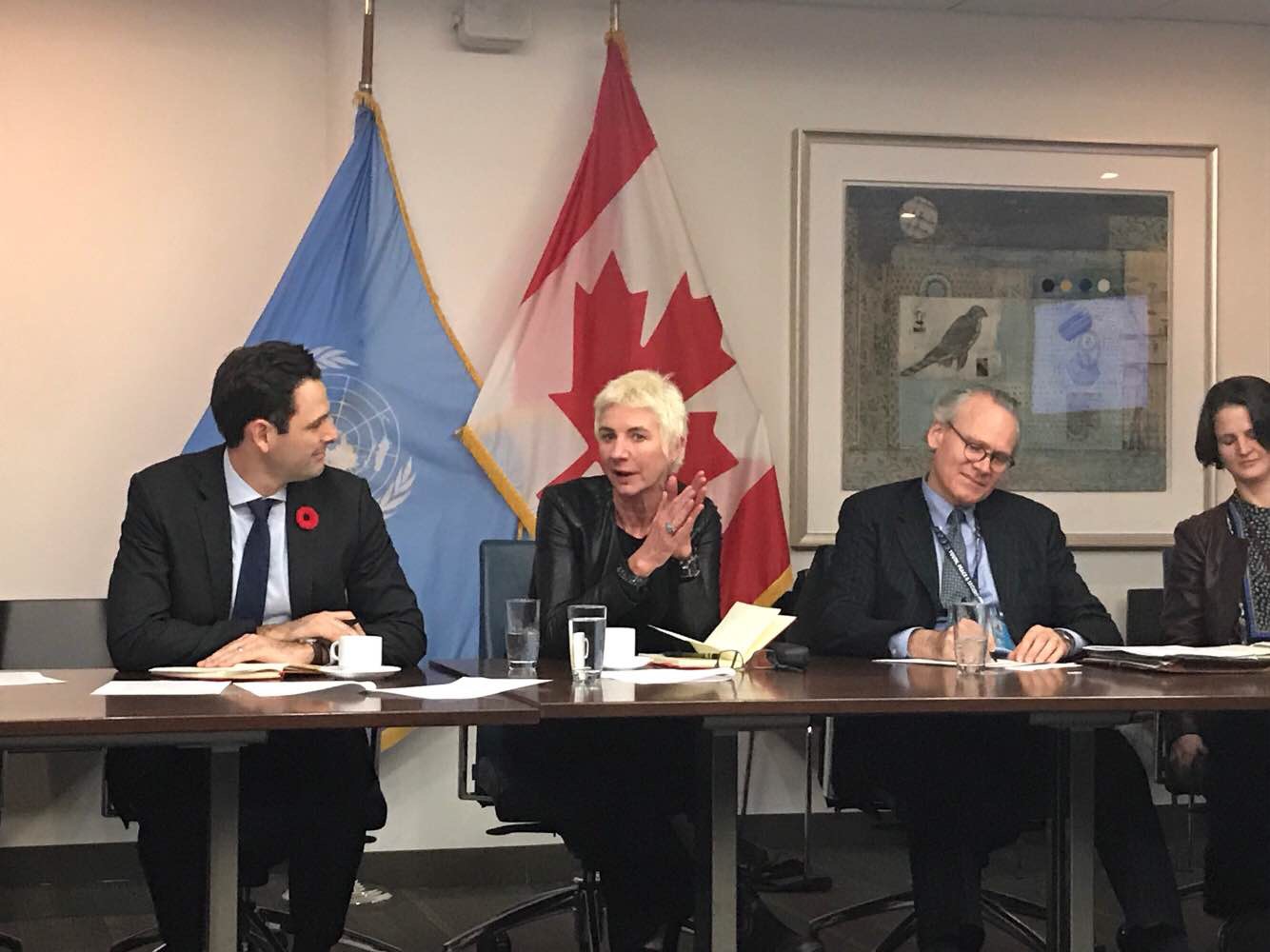 Madeleine Rees speaking at the dialogue on synergies between Sustainable Peace and the Women, Peace and Security Agenda (Photo: Anwar Mhajne)

On the margins of the 17th Anniversary of UNSCR 1325, the Women’s International League for Peace and Freedom (WILPF) undertook several initiatives, including in partnership with the Group of Friends of UNSCR 1325 and the Group of Friends of Sustainable Peace, to leverage the role of local women’s expertise and gender analysis for the UN work on sustainable peace. Reporting back from WILPF-led April 2017 convening, an event that gathered more than 150 women's rights and peace activists from around the world, WILPF shared the voices of local experts on how to make the United Nations more inclusive and make women count within the UN system for lasting peace.

The video shown during these engagements highlights the ongoing obstacles to women’s meaningful participation and its impact on sustainability of peace. At the convening, women called for a paradigm shift in the approach taken to peacebuilding, one which ensures that local women speak for themselves (rather than be spoken for), addresses women’s human rights and understands gender inequalities as one of the root causes of conflict. As Madeleine Rees suggested during one of the meetings, the absence of such an understanding currently challenges prevention work and restricts opportunities for peace.

Read the Summary of the “Sustaining Peace and the Women, Peace and Security Agenda: Strengthening Synergies for Action” Dialogue here>> 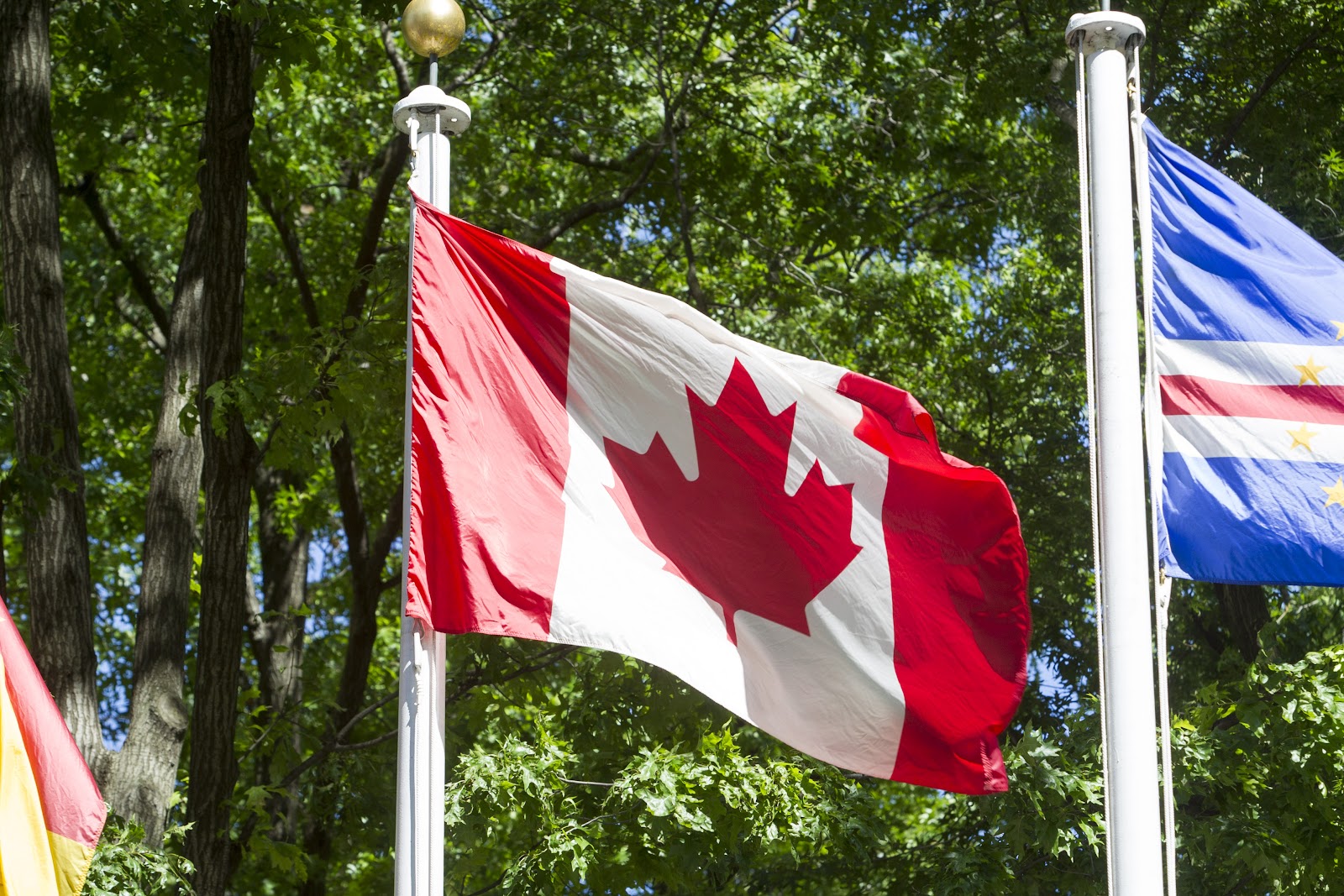 Canada launched its second National Action Plan (NAP) in November 2017 for the 2017-2022 period. This NAP is a follow up on the first Canadian NAP that was adopted in 2010 and covered the period up to 31 March 2016. The Government of Canada has consulted with civil society during the development of their second Action Plan, in particular, the Women, Peace and Security Network-Canada (WPSN-C). The NAP aims to support women’s full participation in peace and security efforts, to prevent, address and fight impunity for conflict-related sexual violence, to consolidate women’s and girls’ empowerment and advance gender equality, including in the world’s most dangerous and complex conflicts.

The NAP emphasises Canada’s commitment to its Feminist Foreign Policy, which requires engaging women and girls as agents and beneficiaries of change in peace and gender equality. Recognising the crucial role of civil society, Canada announced $150 million in funding for local women’s organisations that will facilitate programming in a range of sectors, including reconciliation and conflict prevention. Even though the NAP includes a budget for to achieve its objectives, it fails to reflect comments submitted by WILPF during the first NAP review process on the importance of strengthening disarmament for holistic implementation of the WPS Agenda and conflict prevention. 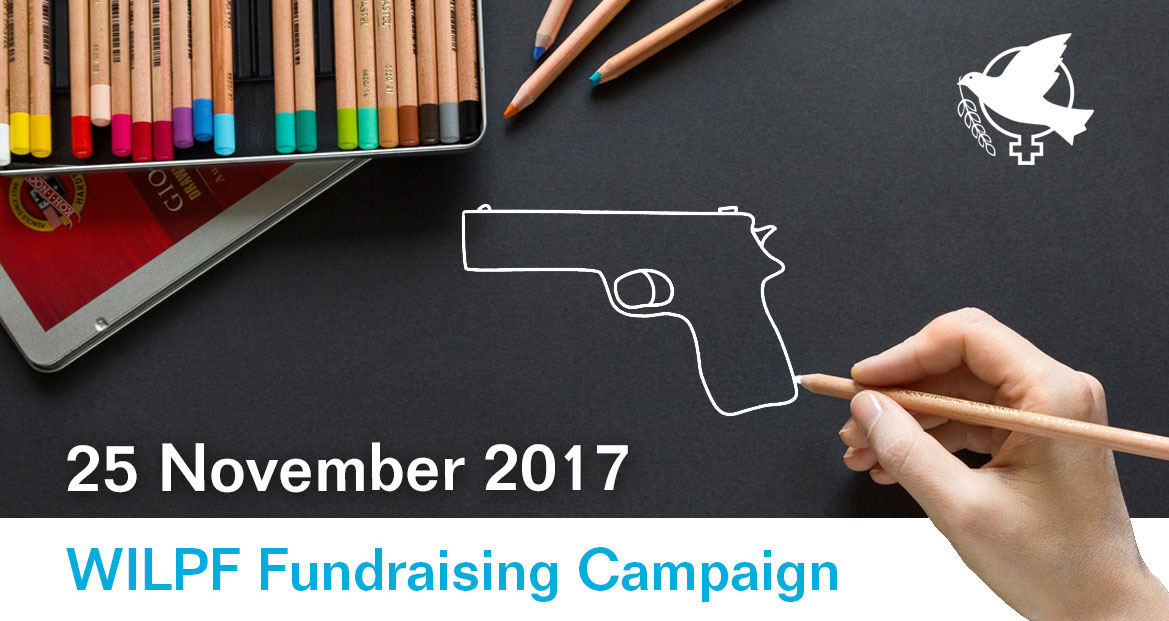 On 25 November 2017, WILPF will organise a one-day campaign commemorating the International Day for the Elimination of Violence against Women. The campaign will focus on illustrating the root causes of violence, including the lack of women’s meaningful participation, the increased commitment to militarised solutions for peace and strengthened political economies of war.

WILPF’s Women, Peace and Security Programme is dedicated to strengthen women’s rights and participation in international peace and security efforts. Throughout the years, it has been very active by monitoring peace processes and engaging with local and international stakeholders, as well as government representatives. Some progress is visible; however, a lot remains to be accomplished.

In 2016, Nigeria spent USD$1,723,000,000 on the military, including armed forces and peacekeeping forces, defence ministries, paramilitary forces and military space activities. This amount could provide free college education for around 15 million girls.

This is only one example. There are other examples that you can find on our website.

Help us to continue our work by participating in the campaign!

Save the date and stay tuned for more information!

Recommendations On The Security Council Open Debate On Women, Peace And Security

In Review: WILPF’s Week At The 17th Anniversary Of UNSCR 1325

What Would A Feminist Security Council Agenda Look Like?

Mobilising For A Gender-Sensitive Treaty On Business And Human Rights

Women’s Progress Index Shows Big Gaps Among And Inside Nations

Women’s Struggle For Citizenship: Civil Society And Constitution Making After The Arab Uprisings

Dilemmas And Experiences Of International Support For Inclusive Peacebuilding