While the heads of the United Nations (UN) met for a retreat in Montreux to discuss the future of the UN, over 150 leading women’s rights and peace activists from around the world have convened at the UN office in Geneva from the 26-28 April 2017 to analyse and review how the principles of the UN itself can be reclaimed.

The convening entitled “Reclaiming the United Nations as a Peace Organisation – ensuring women’s meaningful participation for peace and strengthening multilateralism” was organised by the Women’s International League for Peace and Freedom (WILPF) and attended by many diverse women-led civil society groups and allies in international intergovernmental organisations. In-depth discussions were held on disarmament, political economy, humanitarian and development interventions, as well as on the gendered dynamics within the field of peace and security, especially at the local level. 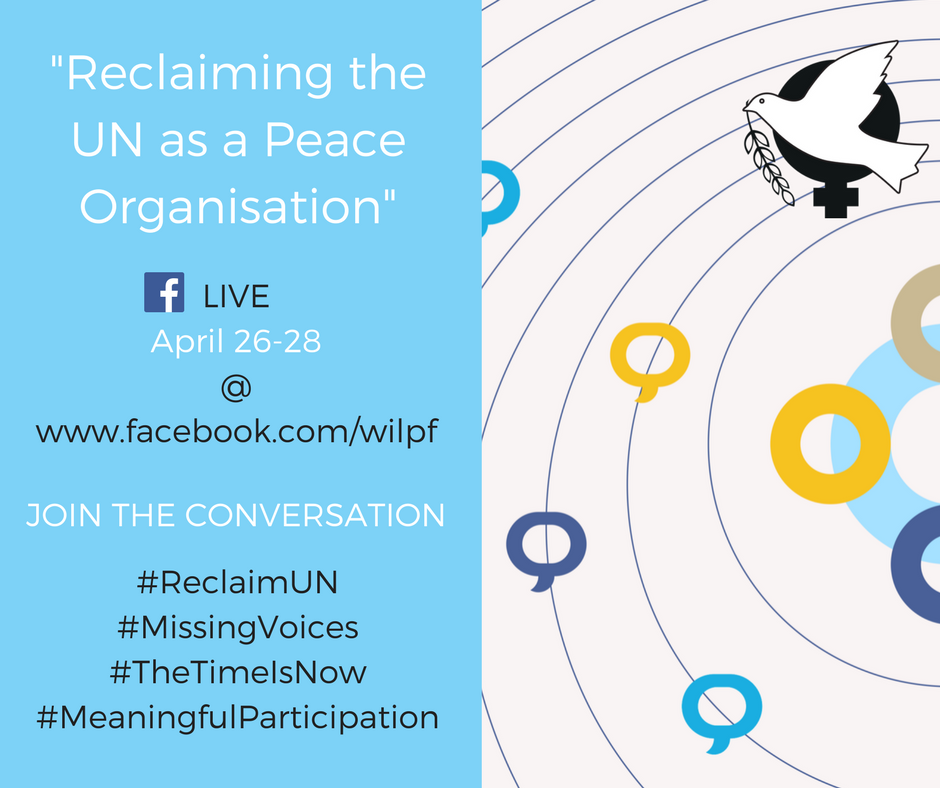 One loud message came across: Local women and women’s groups must be at the centre of conflict prevention efforts because they have the analysis, the knowledge and the capacity to do so. Participants from Yemen, Syria, Palestine, Colombia, the Democratic Republic of the Congo (DRC), South Africa, Bosnia and Herzegovina, Kosovo, among others demanded that the UN must listen and hear from the communities affected by the conflict that these women represented. As a peaceful organisation, the UN must move from managing conflicts to addressing root causes of instability, contributing to building “sustainable feminist peace” with women at the forefront.

This convening took place against the backdrop of increasing militarism, fear and shrinking space for free and independent civil society. This has further been compounded by a real and serious crisis of legitimacy, credibility and trust in the UN. The rolling back of government commitments to deliver on UN frameworks for women’s rights and meaningful participation; the lack of funding and resources, particularly for local-level work, and the unravelling of international norms on peace, including the lack of respect for the norms of international humanitarian law and human rights norms.

In conflict-affected communities, women are the humanitarian interveners without whom communities simply would not survive. The participants highlighted how, despite the brave and decisive efforts of grassroots women activists on the ground, they too often get invited only into siloed and tokenistic side-shows to the political deliberations on their context.

Similarly, Rasha Jarhum, Yemeni Social Researcher and Activist, shared: “Yemeni women activists are breaking the siege on Taiz to get medical supplies in. Others are creating a space for civic life and non-violence in Aden in the face of extremist factions. Yet we struggle to get even basic information about the UN talks on our country or we are told to participate in siloed processes when we want to be at the table.

Speaking about Libya, Hajer Sharif, youth activist and co-founder of the 1325 Network in Libya, reminded participants, “girls who have grown up in a war have the right, as well as experience, to take a lead on finding solutions and setting the agenda for the future.

On a different note, the vogue for international agencies to frame women activists’ work as ‘countering violent extremism’ instrumentalises what they do and also risks making them a target.

The speakers also highlighted how the UN action on women’s rights is being eroded by the rising tide of xenophobia and the tendency of governments to emphasise military solutions to the problems that are in fact of complex political nature in countries affected by conflict.

Rosa Emilia Salamanca, Director of CIASE (Corporación de Investigación y Acción Social y Económica), Colombia explained how the women’s movement in Colombia developed a localised women’s agenda to bring to the peace table in the face of growing localised oppositional militias:“We worked for four years to make sure that a negotiation between FARC and the government would reflect women’s issues. We know there is more to do. There are many paradigms that need to be shifted. People need to see changes in the country; otherwise they will never feel at peace. Peace is much more than the silencing of guns; it is not enough to stop killing each other. Now we have to start living in a different way.”

Speaking about Bosnia, Nela Porobic Isakovic of WILPF observed that, in the long term, “everything that was done in the Bosnian situation was compartmentalised”. She emphasised: “We signed a peace agreement, but no reparations were envisaged in that accord. Twenty years later that still has not been addressed. Political elites – who have caused the war – were legitimised through democratic processes in which they ran for election, using their prior networks of power. The country’s political economy is held captive by free market principles, which means that women’s lack of access to economic opportunities is hidden. Civil society has been dragged into service provision, which means we’ve lost space for solidarity and political work. Gender equality and social justice have become an individual need and an individual benefit, as opposed to a collective right.”

Randa Siniora, Director of the Palestinian Women Centre for Legal Aid and Consulting highlighted: “We need to change the rules of the game. The feminist work of changing power relations is more urgent now than ever.”

As, Madeleine Rees, Secretary-General of WILPF, stated: “All of us have an interest in making the UN a peace organisation”.

According to the participants, reclaiming the UN as a peace organisation requires action to:

The convening itself was called for after many women activists were prevented from attending the annual session of the UN Commission on the Status of Women in New York as a result of the US Administration’s new policy initiatives on migration. Whilst some activists struggled to get visas, other organisations, such as WILPF, choose to protest those meetings in solidarity and others used their participation to bring attention to women’s missing voices.

In order to ensure an open and inclusive convening, all plenaries were live-streamed on WILPF´s Facebook page, and viewers invited to ask questions to the panels. All videos are available on facebook.com/wilpf.

Women's Meaningful Participation In The UN Peace Work: Where Does The UN Stand Now?

This YouTube video created by WILPF explains that shrinking space for women's voices at the UN has been an issue for a long time and gives insight into this problem. In order to guide the UN away from a slippery slope and back to its Charter, the Women's International League for Peace and Freedom (WILPF) gathered more than 150 women's rights and peace activists from around the world in April 2017 to discuss how to make the UN more inclusive and make women count within the UN system.