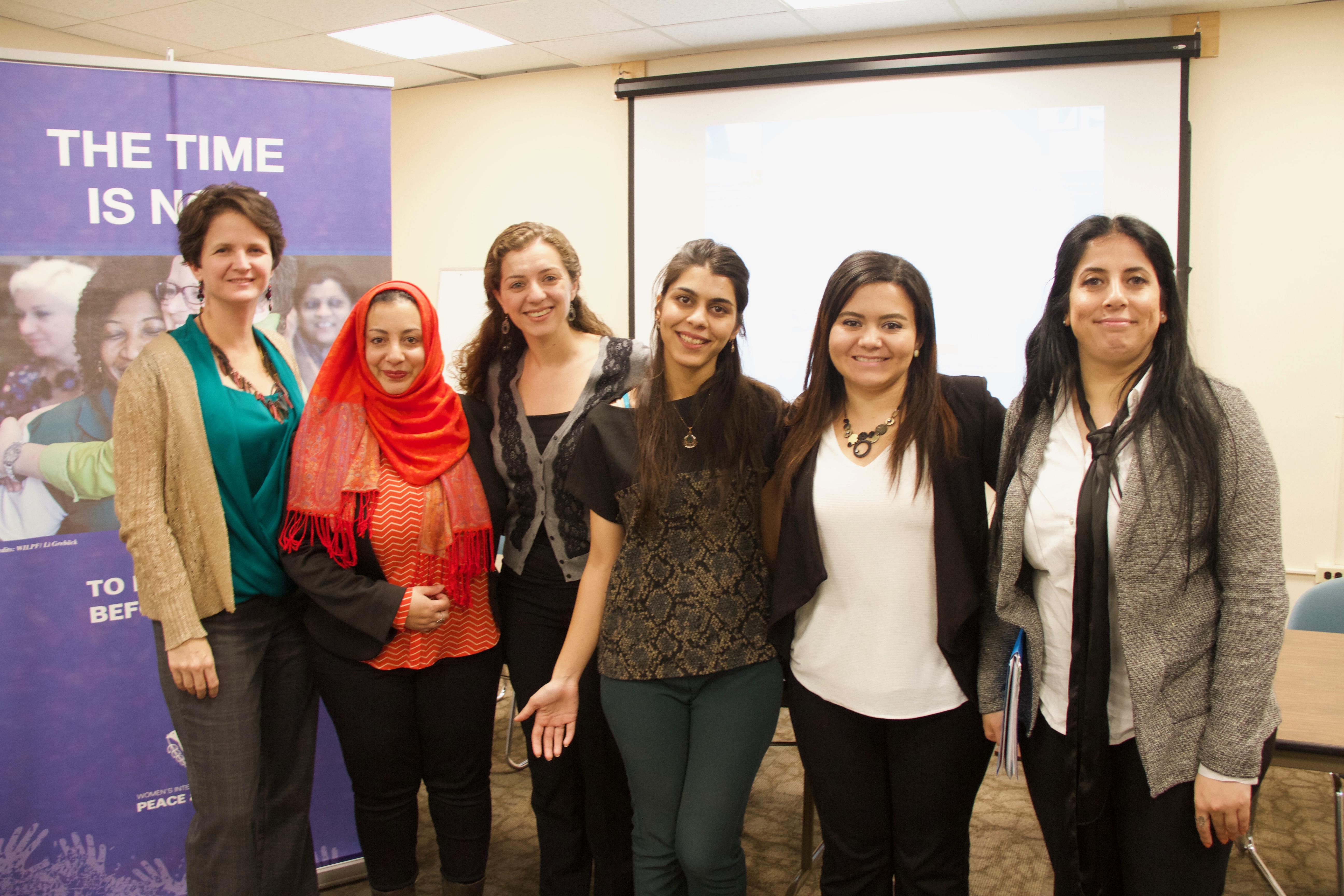 WILPF International and a special delegation of women peace leaders from Syria, Yemen, and Libya at the 16th Anniversary of UNSCR1325.
(Photo: WILPF/Marina Kumskova)

In October 2000, world leaders on peace and security adopted the historical Security Council Resolution 1325, which for the first time recognised women’s important role in conflict prevention through post-conflict reconstruction.

Last year there was a Global Study on UNSCR 1325 that provided the evidence base for action. One year after the global study and sixteen years after the adoption of UNSCR 1325, where are we now?

At the 16th anniversary of UNSCR 1315, WILPF worked with grassroots partners and international policymakers to call for concrete action, especially on key gap areas of conflict prevention, disarmament, and financing. We called for feminist action against militarised approaches that ensures accountability on commitments and action for meaningful accomplishments for women at the grassroots level.

WILPF EVENTS AT THE 16TH ANNIVERSARY OF UNSCR 1325

One week before the UN Security Council WPS open debate, WILPF launched a Security Council Scorecard on Women, Peace and Security to strengthen accountability for holistic implementation of the Women, Peace and Security (WPS) Agenda. Although Security Council members have a unique responsibility for peace and security given their role, they also are some of the largest contributors to global military expenditure, which directly contributes to sexual, gender based, and other forms of violence. At the webinar launch of the Scorecard, participants shared how women are affected by arms. We called for more holistic action on the WPS agenda that strengthens the conflict prevention gap including acting on disarmament and women’s human rights.

During the week of the Security Council WPS Open Debate, WILPF hosted a delegation of women peace leaders including from Syria, Libya, Yemen, and Nigeria and engaged in a variety of events, bilateral meetings, and other engagements for concrete action.

WILPF Partners from the Middle East North Africa (MENA) region highlighted regional patterns in how gender blind institutions with militarised responses result on ongoing challenges to women’s meaningful participation in peace efforts, how the influx of arms results in dangerous conditions for women and girls, and what women civil society leaders are doing to rebuild communities and promote peace. They participated in a closed WILPF consultation, spoke at a closed round-table at the Swiss mission, held an open side event, and engaged in a variety of bilateral meetings and actions throughout the week.“Women’s experiences and impact of conflict on women are not prioritised and often misrepresented,” said WILPF Crisis Response Programme Manager Laila Alodaat. “We wish to put women’s experience at the heart of intervention strategies.”

WILPF Global Programmes Director Maria Butler and WILPF-Nigeria President Joy Onyesoh contributed to a closed workshop co-hosted by WILPF together with MenEngage, ICAN and UNDP on Masculinities and Violence in Crisis Settings. Participants explored challenges and assumptions around violent masculinities in conflict situations and action that can be taken to transform these gender norms as part of broader systems of militarism and violence. “Changing system of governance requires transforming masculinities for women’s rights and peace,” said Maria Butler.

WILPF PeaceWomen Programme Director Abigail Ruane also spoke at an open event co-hosted by WILPF together with the Missions of Australia, Ireland, Spain, and the United Kingdom to the United Nations, as well as UN Women, and the Global Network of Women Peacebuilders on “Financing the Women, Peace and Security Agenda: Good Practice and Lessons Learned for Accountability and Implementation.”  The event built on WILPF’s launch of the #MoveTheMoney toolkit in September and focused on the importance of concrete action to finance the WPS agenda in order to move from commitments to accomplishments. “We spend trillions on war and pennies on peace; and of course, you get what you pay for,” Abigail Ruane, WILPF PeaceWomen Programme Director, said. “The time is now to move the money from violence and war to peace and gender justice.”

Of the 80 member state speakers this year, 46 (57.5 per cent) made new commitments — including 10 financial commitments. However, despite the focus of the WPS debate on follow up to commitments made one year after the Global Study, only 24 (41 per cent) of the 58 concrete commitments made in 2015 were followed up at this year’s debate with accounts on commitment implementation and action. Furthermore, despite  a welcome focus on women’s participation, especially around the inclusion of civil society, militarisation of the discourse was a worrying trend, with strong attention to recruiting women to armed and peacekeeping forces. 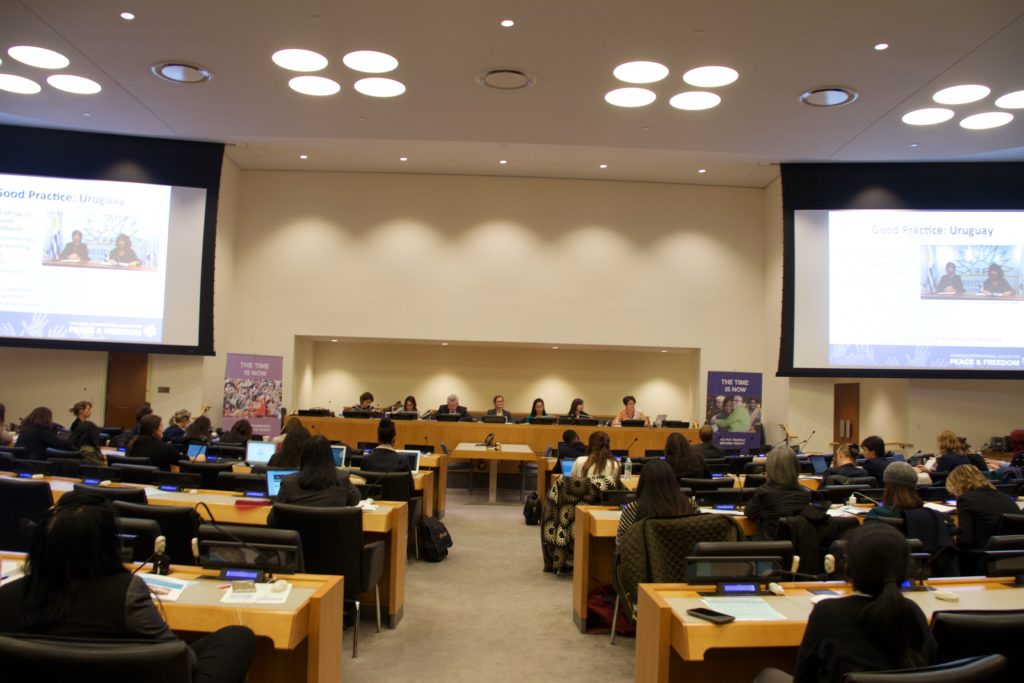 Participants and panelists of the “Financing the Women, Peace and Security Agenda: Good Practice and Lessons Learned for Accountability and Implementation” event. Photo: WILPF/Anna Warrington.

Continuing empty commitments is not enough. We need action! WILPF’s analysis shows that despite commitment at the rhetorical level, we still face a substantial accountability gap in concrete action for change.

It is critical that as we move forward, we leverage the normative support for the WPS Agenda to address the implementation gap and move from commitments to accomplishments.

Read event summaries for our events:

Read summaries of events our delegates participated in: