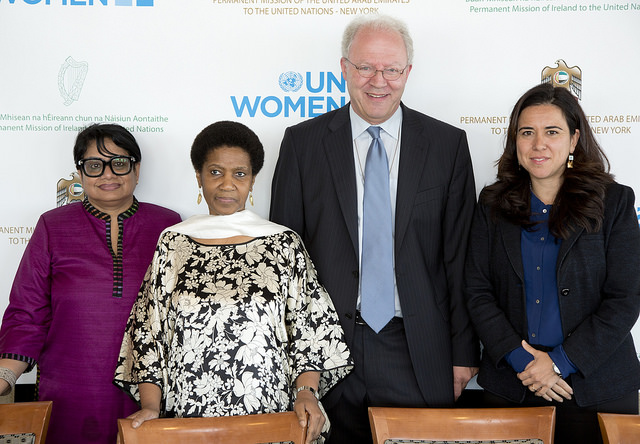 The Global Study was launched on 14 October 2015 at an event hosted by the Group of Friends of the Global Study and UN Women, at which the Study was presented and the Member States made concrete, financial commitments to fund the Study's recommendations. The launch was part of the events organized around the 15th Anniversary of the UNSCR 1325. The Global Study's lead author is Radhika Coomaraswamy and was requested by the Secretary-General to produce the document. For its preparation, there were numerous briefings, consultations and research papers submitted. A special political High-Level Advisory Group was created to provide advice on the Global Study on a regular basis. UN Women also supported the Global Study and the WPS Inter-Agency Standing Committee had a special sub-group on the Global Study. Civil Society and research institutes also participated in the study by completing the Civil Society Survey and by submitting recommendations through policy briefs and reports. You can find links to these sections in the accordions below.

The Global Network of Women Peacebuilders (GNWP), in partnership with Cordaid, International Civil Society Action Network (ICAN), and the NGO Working Group on Women, Peace and Security (NGOWG) distributed the CSO survey from February to April 2015 to collect the views, concerns and recommendations of civil society organizations (CSOs). This important CSO survey was developed jointly by the GNWP, ICAN, Cordaid and the NGOWG on WPS, with inputs from UN Women and other members of the UN Inter-agency Standing Committee on Women, Peace and Security. The views shared will directly feed into the Global Study on the Implementation of UNSCR 1325, called for under UNSCR 2122 to "highlight examples of good practice, implementation gaps and challenges, and priorities for action."

Another report has been prepared based on other reports from Focus Group Discussions (FGDs), conducted by civil society networks and organizations selected by Global Network of Women Peacebuilders (GNWP) and Cordaid. The Focus Group Discussion (FGD) Report informs the Global Study on Women, Peace and Security, among other recommendations, is to "highlight examples of good practice, implementation gaps and challenges, and priorities for action" and to ensure that civil society voices are adequately reflected in the study.

To have a broad impact, ensure high visibility and to increase the credibility of the Study and its findings, the Study requires the support and backing of a high-level advisory group consisting of eminent experts and dignitaries. It is expected that the members of the High-Level advisory group will provide substantive guidance in the conceptualization, development and finalization of the Study, including feedback on its policy analysis and data aspects; as well as policy recommendations.

The High-Level Advisory Group for the Global Study:

Learn more about them here >>

Consultations are on-going and happening in various regions.

A key event at the WILPF 100 conference was the April 28th interactive consultation on the October 2015 Women Peace and Security High-Level review co-hosted by WILPF PeaceWomen and UN Women. As part of the consultations around the UNSCR 1325 Global Study, lead author, Radhika Coomaraswamy, along with PeaceWomen Director Maria Butler and UN Women Peace and Security Policy Adviser and Officer in Charge Nahla Valji met with over 80 members of civil society organizations from around the world to hear their input, recommendations, and voices for action.

This event was co-sponsored by WILPF, the Global Network of Women Peacebuilders (GNWP), Women's Action for Nuclear Disarmament (WAND), and the Consortium on Gender, Security, and Human Rights. Civil society advocates and activists from around the world met in New York so as to discuss the Security Council's High-Level Review of the progress at the global, regional and national levels in implementing UNSC Resolution 1325 (2000) and to engage with this consultative process.

Stakeholders' Consultation on the Global Study on UNSCR 1325 with the African Union Commission, UN Women, and the Gender is My Agenda Campaign (GIMAC)

On January 22 and 23, 2015, consultations were held for the African region in Addis Ababa where the "Gender is My Agenda Campaign" (GIMAC), the African Union Commission and UN Women held a joint Stakeholders' Consultation to prepare for the Global Study on UNSCR 1325.

In early 2015, there was an opportunity for civil society organizations/research institutes to contribute inputs within their areas of expertise and experience in the form of short substantive policy briefs/papers focusing on strategic recommendations for the Global Study on the Implementation of Security Council Resolution 1325.

UNSCR 1325 is one of the crowning achievements of the global women’s movement and one of the most inspired decisions of the United Nations Security Council. Yet, critical work remains to be done. The Global Study calls on the United Nations, Member States, civil society, and all actors to ground their understanding of conflict and the changes we are seeing with the needs and concerns of women in specific situations of conflict. The translations below provides full access to the Global Study allowing many activists to take the agenda forward.