Two weeks of negotiations, events, advocacy and networking at the Commission on the Status of Women (CSW) have come to an end. Thousands of women groups and activists came together in New York to work towards the elimination and prevention of all forms of violence against women and girls. The political games and maneuverings during negotiations meant that the Agreed Conclusions were contested and consensus was difficult. However, in the end, states managed to avoid repeating last year's failure and an agreement was reached.

The final Agreed Conclusions acknowledges the relationship between the “illicit use of, and illicit trade in, small arms and light weapons and aggravated violence against women and girls”, which was a late addition to the text and part of WILPF's advocacy priorities. The Agreed Conclusions have an explicit call for accessible and affordable healthcare services, including sexual and reproductive health services, such as emergency contraception and safe abortion for victims of violence –a highly contested issue over the past two weeks. There is stronger language on participation than in the zero draft, including a call for increase in women's participation in conflict resolution and peacebuilding processes and post-conflict decision-making. There was also an important paragraph on supporting and protecting women human rights defenders and a reference to all women, peace and security resolutions; these are significant areas of strength. In other areas there are clear remaining weaknesses. There is no new language on ‘gender identity' or ‘gender orientation' to address the protection of LGBT rights-which represents a huge gap. Proposed language on ‘intimate partner' or ‘intimate relationships' did not make the final text, which would give some recognition to violence occurring outside of marriage but within partner relations.

Two of the most alarming aspects of the negotiations at CSW were a continued conservative backlash with impacts both at the UN and at national level. In the conference room of UNHQ, the “Unholy Alliance” led by Iran, Russia, Syria and the Vatican, worked together to push hard to roll back agreed language and add sweeping paragraphs about traditions and national sovereignty, which would have undermined the whole text. These paragraphs did not make the final text. Madeleine Rees, WILPF SG, blogged about the negotiations and calling out the spoilers.

Meanwhile, beyond New York, there were serious actions pushing back against women's rights such as the Libyan Grand Mufti issuing a fatwa against the agreement at CSW even before it was finalized as undermining the family's structure and integrity; and Egypt's Muslim Brotherhood issued a declaration stating that the CSW agreement would lead to “the complete disintegration of society”. These statements are particularly concerning because this means that women's human rights defenders in the MENA region may be increasingly at risk.

Despite the push back, the WILPF partners from MENA region called for CSW to reflect the reality for women facing increased militarization in the region realizing that the biggest threats in the region are poverty, unregulated weapons trade and a lack of democratic oversight of the armed forces. Zahra Langhi, member of the Libyan Women's Platform for Peace (LWPP), as well as WILPF's partner for the MENA Agenda 1325 wrote a response. Others also responded including Soad Shalaby of Egypt's National Council for Women who wrote that the UN agreement would, to the contrary,

"lead to women's integration within society.” The Women of the Arab Caucus demanded that states “stop using justifications based on religion, culture, tradition or nationality to block the progress of laws at all levels” arguing that the “violence they cause is unacceptable and can never be condoned or tolerated.” WILPF supports these courageous women in reminding the UN and the world that violence is no one's culture, and states must uphold their obligations to respect, protect, and fulfill women's and girls' human rights.

Now that CSW has concluded, member states at UN headquarters started another round of negotiations on the proposed Arms Trade Treaty (ATT) where efforts must continue to create a strong and comprehensive framework that includes binding provisions for preventing gender-based violence. Establishing the linkages between CSW's focus on violence against women and girls, and the ATT, Annie Matundu-Mbambi (President of WILPF-DRC) deliveredour joint statement at CSW calling for a strong arms trade treaty that includes legally binding gender provisions, and requires States to deny arms transfers to countries in which there is gender-based violence, especially rape. Subscribe to Reaching Critical Will's updates or follow them on Facebook and Twitter for live updates.

In news, events and initiatives we feature Women, Peace and Security material, with a special focus on CSW 57 outcomes. This edition includes a recent news articles on Michelle Bachelet's decision to leave UN Women, the deteriorating situation for Syrian women, an initiative on WILPF USA practicum Blogs and a statement on Concerns of Women's Organizations over Negotiations on CSW 57 Outcome Document. Additionally, two Policy Brief resources on Women, Peace and Security issues and peacebuilding in post-conflict settings and another resource on challenges to Women's security in the MENA region. 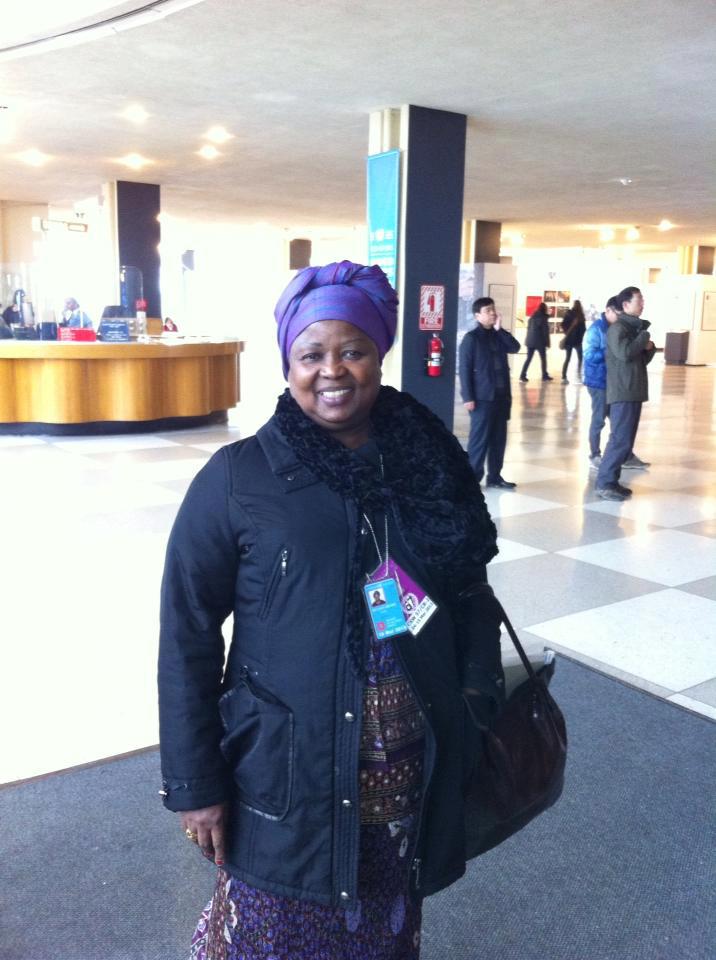 “Member states should not consent to a compromised treaty that risks undermining existing obligations" reminded Sofia Tuvestad (WILPF Sweden) and Maria Butler (PeaceWomen/WILPF) in a recent article Make it Binding: Include Gender-based Violence in the ATT. States have started another round of negotiations on the proposed Arms Trade Treaty (ATT) from March 18- 29.

WILPF is working with a coalition of NGOs to strengthen the provisions for preventing gender-based violence. There is lots of work to be done to make sure GBV is not negotiated out of the text and that the current weak formulation is improved.
There has been a growing number of supporters for moving GBV from article 4(6) to mandatory section 4(2), based on our recommendations. As of today, 80 States have supported the strengthening of GBV in the text. The negotiation and discussion on GBV will continue for another week. Please do follow and get involved as this is a historic time to link arms control with the prevention of gender-based violence.

Our position has been clear: the current formulation in the draft text (preamble paragraph 11 andarticle 4(6)(b))

is not acceptable: it undermines the fact that acts of gender-based violence are violations of human rights (HR) and international humanitarian law (IHL).

Quote: “When I feel frustrated I am not myself I am all of these people who have been struggling and fighting everyday to make a better world.”
- CSW Event: Both Men and Women Using their Inner Resources to Bring Change: Relearning peace

Quote:"We will never be able to achieve repatriation understood as the repair of the harm but let us do at least what we can."
- Elisabeth Rehn at CSW Event: A question from audience at "Achieving Gender Justice: The Case for Reparations": What should come first justice or peace?

Quote: “Security is not a universally "good thing". The concept of human security is often gender-blind. We have to ask two questions: Whose security and for whose benefit? What does security mean for women?”
- CSW Event: Human Security: the missing link between women's rights, conflict and peace

Quote: “Without participation of men it is very difficult. Men are also psychologically affected by the conflicts, they are perpetrators, but they are also fathers, sons and brothers.”
CSW Event: Sexed Pistols Reloaded: A Case Study of Sexual Violence in the Context of Conflict in the DRC

Some Overarching Messages from Side Events:

We have featured a recent article by Nirmala, from WILPF Nepal, in our WPS Portal. Nirmala discusses the current situation in Nepal stating that "the main reason violence against women occurs is the patriarchal and feudal mindset", the National Action Plan and lack of implementation. Nirmala gives 6 recommendations, listed below. 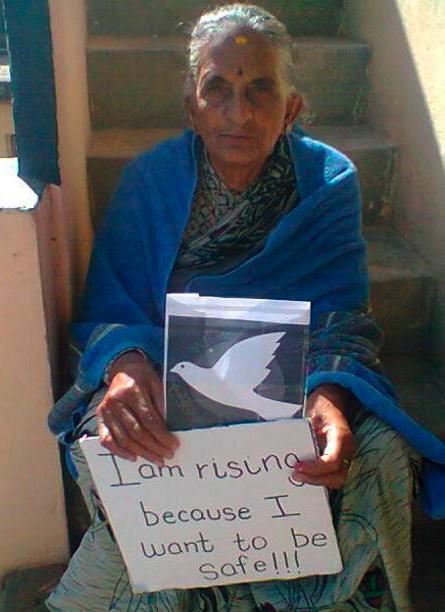 
To read the full article >>

The 8th of March marked International Women's Day (IWD), a day which symbolizes the remarkable political, economic, and social accomplishments by women, past and present from all over the world. WILPF celebrated launching our historic 100th anniversary movement, holding several events and by cosponsoring a march “A life Free from Violence Against Women and Girls.” WILPF members and other participants participated in the march supporting human rights defenders from all over the world.

WILPF's historic Launch of the 100th Anniversary movement was a huge success with a celebration and presentation of WILPF's past and present accomplishments and the work that lies ahead to stop war. See photos of the special event here.

WILPF also held an IWD seminar in Geneva on ‘Preventing Gender-Based Violence through the Arms Trade Treaty' and WILPF made statement in the Conference on Disarmament.