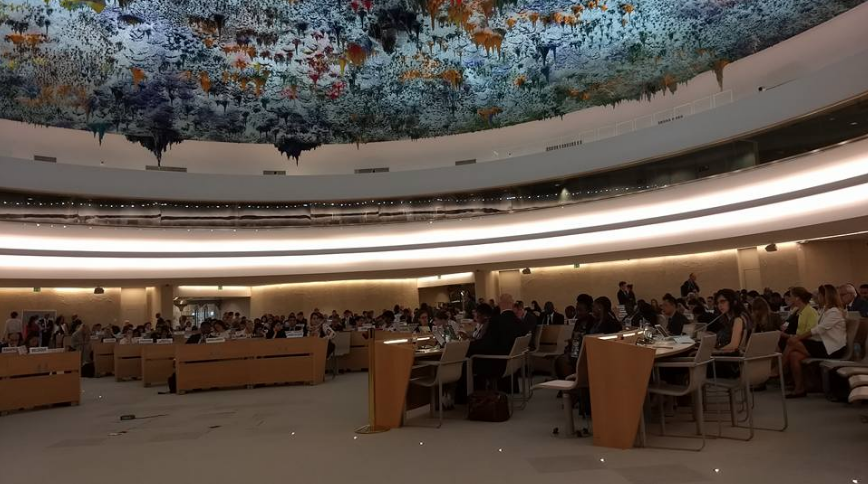 The need to put a spotlight on violence against women and girls is more pertinent than ever. In every society, women and girls are subjected to physical, sexual and psychological abuse that cuts across income, class and culture. Violence against women and girls violates their human rights and fundamental freedoms. It is an obstacle to the achievement of equality, development and peace. The long-standing failure to protect and promote those rights and freedoms has to be addressed as a top priority. Women’s rights organisations and feminist groups must have a central role in setting the bar for how to do that.

I am writing from the 35th Session of the Human Rights Council (HRC35) in Geneva, where the Government of Canada has tabled a resolution on engaging men and boys in preventing and responding to all forms of violence against all women and girls. This resolution outlines interventions that are gender-transformative, that dismantle harmful norms, attitudes, practices, stereotypes, inequalities in power and privileges - particularly related to masculinities - which perpetuate all forms of violence towards all women and girls.

MenEngage Alliance has been actively involved in securing that the work with men and boys is framed and operationalised not as a goal in itself, but as a strategy towards the ultimate aim of the elimination of violence against women and the promotfon og the rights of women and girls. During the course of the session, we have brought civil society speakers to this international space for their voices to be heard as they call for drastic change.

It strikes me that in finding solutions for huge problems the world faces, there appears to be a tension between the individual and the systemic: is it individuals that are the source of violence and have to change? Or is it the systems in which we operate and live our lives that enable or even create such violence, and that have to change? Is it up to individual men to take responsibility for their violent behaviours, or is it the responsibility of states to shape and implement laws, policies and institutions that perpetuate or can eliminate such violence?

Following the HRC35 debate this week, it has become ever more pertinent that it is both. Systems are created by people, and people, in turn, are shaped by the systems in which they live. There is no either/or, there are roles to play for each and every one of us and for every element of the system to transform. It is up to individual men to change their own violent behaviours and ideas around masculinities and call out violence perpetrated by others.

It is up to institutions and organisations to adopt policies, procedures and practices that create safe spaces. And it is up to governments to adopt and implement laws and comprehensive national strategies to put an end to violence against women and girls, including by committing the adequate resources to do so. Change at all levels is necessary and will reinforce and enable change at others.

There is perhaps no clearer issue for the need of state transformation than militarism. Governments must come to realise that they cannot end violence with more violence. The global arms trade is one of the biggest hypocrisies of this day and age. When states are trying to achieve peace and gender equality without addressing their role in the reproduction of violence through the arms trade, it is like trying to mop the floor with the tap running. It is mission impossible, and we all know it. The arms trade is patriarchy manifesting itself in political economy - primarily by men in power - and it needs to stop, immediately.

A rigorous paradigm shift has to happen with states. We, as civil society gender justice activists and peacebuilders, are here to provide expertise and support states to do that – and to hold states to account for the realisation of their commitments. And in turn, we need to be supported by states, both national and foreign, to implement this vision of change on the ground. Challenging patriarchy in all its manifestations is at the core of MenEngage Alliance’s work, and that is why we work with partners like WILPF, and support initiatives such as the #MoveTheMoney campaign.

We are also calling on male leaders – at all levels, and including within MenEngage Alliance itself, to make the spaces they occupy feminist, and be accountable to women and girls. But, what does this mean to us? It means acknowledging that we build on the heritage of feminist women’s rights organisations and movements, be allies to their work, and ground our work firmly in feminist principles. It means striving to strengthen our work by embracing a women’s rights perspective and feminist analysis, including placing inequalities in privilege and power that result from patriarchy at the heart of our work with men and boys. It also means committing to listening to and being accountable to women’s rights voices, as well as institutionalising democratic and inclusive decision-making processes, including within MenEngage Alliance.

If we are to achieve all development and peace commitments, meaningful participation of women’s rights organisations and feminist groups is crucial. The current reality of shrinking spaces for civil society is against what the Agenda2030 stands for. It’s at huge risk of being a hollow-shell, if we don’t act now!

At the upcoming High-Level Political Forum (HLPF) we will continue to have these conversations and keeping up the pressure on governments to take their commitments seriously – together with partners like WILPF – to make feminist peace a reality. 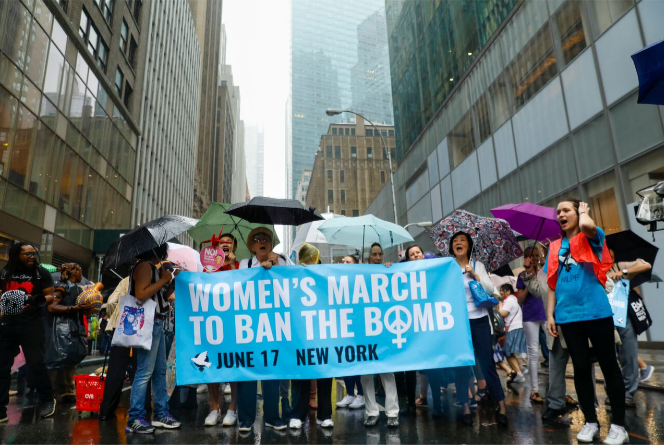 Participants of the Women's March to Ban the Bomb in New York. (Photo: WILPF Reaching Critical Will)

As part of its work to stigmatise war and violence, this Saturday WILPF and partners held a historic Women’s March to Ban the Bomb.  On 17 June 2017, activists in New York and more than 150 other places around the world held marches and solidarity actions to demand that world leaders to adopt a treaty prohibiting nuclear weapons once and for all. One loud message rang loud and clear: “A world without nuclear weapons is not only possible, but a necessity to our human survival.”

The march this weekend showed that people around the world support the leadership of non-nuclear armed states in creating a nuclear-free world. Although nuclear weapons are not yet illegal under international law, the legally binding tready now being negotiated to prohibit nuclear weapons can change this. Civil society has led action to successfully ban landmines in the past.  History is on our side.

What is next? Now, it is important to keep the momentum and demand further action! You can: 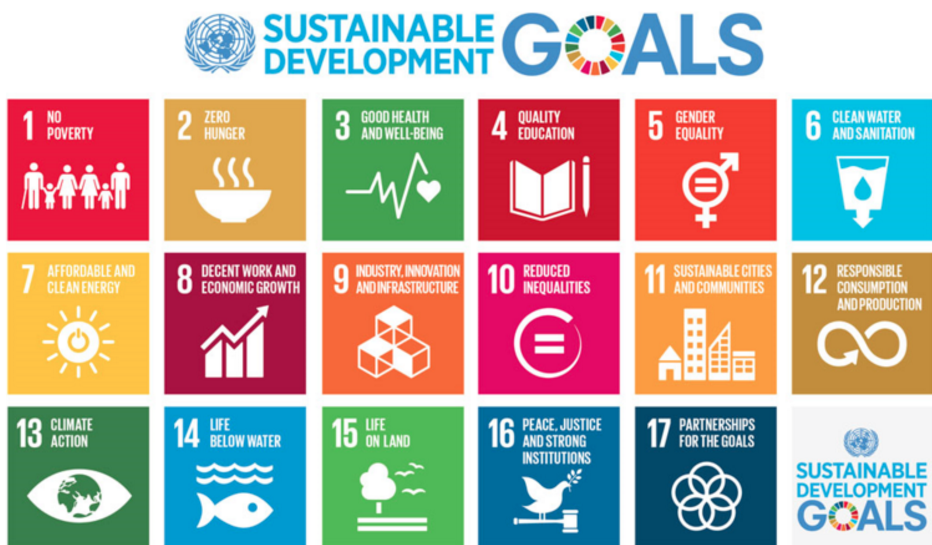 The 2017 High-Level Political Forum (HLPF) on Sustainable Development will convene in the UN Headquarters in New York in less than a month to analyse progress, review challenges and share good practices in the implementation of the Agenda 2030.

With our coalition, the Women’s Major Group, WILPF mobilises action to demand global development based on disarmament and women’s full and equal socioeconomic participation, political participation and human rights. As a part of our work to address root causes of violence and strengthen multilateral action, WILPF brings attention to how the target arms proliferation (target 16.4) exacerbates gender-based violence (target 5.2); how arms reduce inclusive participation (target 16.7); and how arms proliferation are part of political economies of war rather than gender justice and sustainable peace.

Join us for our pre-HLPF Webinar on 28 June 2017 at 9:00am EST to learn where we are in the implementation of Sustainable Development Goals (SDGs), what are the challenges and opportunities, and how can activists leverage the SDGs for local action on gender equality, disarmament and sustainable peace.

We are also engaging in a variety of events to strengthen feminist mobilisation for change. Stay tuned for more details!

By Sarah Tunnell and Anne Lescure 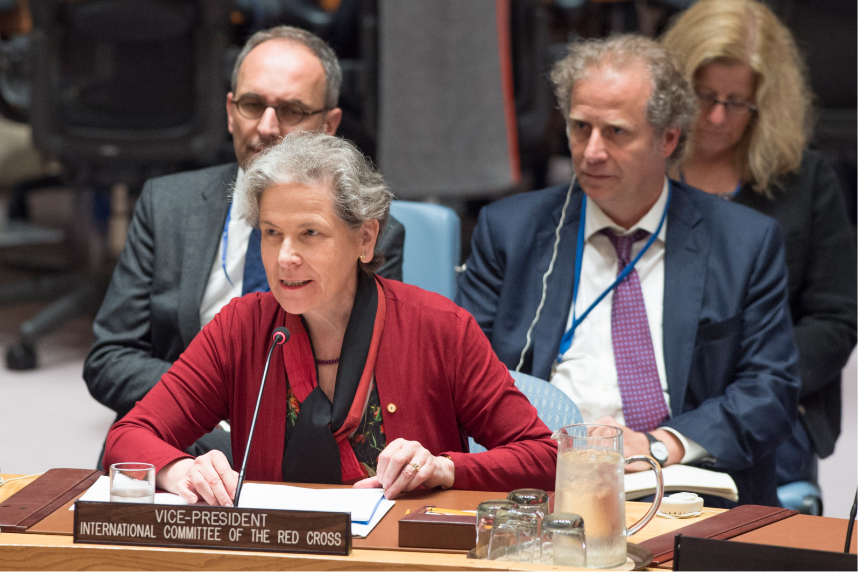 Christine Beerli, Vice-President of the International Committee of the Red Cross (ICRC), addresses the Security Council meeting on the protection of civilians and medical care in armed conflict. (Photo: UN Photo/Eskinder Debebe)

The Security Council Open Debate entitled, “Protection of Civilians in Armed Conflict: Health Care in Armed Conflict” was convened by Uruguay on 25 May 2017. The meeting was framed as an opportunity for Member States to assess the scope of threats to medical facilities in conflict situations, broaden the protection of civilians’ agenda to a more inclusive health care, respect for international humanitarian law and forced displacement, as well as to assess the implementation of Resolution 2286 (2016).

Though the debate’s general discussion included a number of strong statements regarding issues such as conflict prevention, displacement, justice and implementation, gender perspectives were absent from these contexts and were only incorporated as general references or as protection concerns. Despite strong statements concerning general disarmament, the only speaker who offered a gender perspective on disarmament issues was the representative of Ireland, who highlighted the nexus between explosive weapons in civilian areas and women and girls most often displaced by this phenomenon.

By Marina Kumskova and Alexandra Rojas 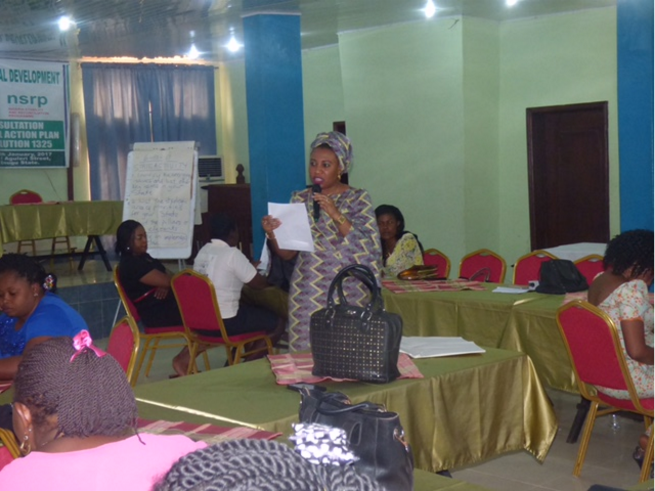 Joy Onyesoh of WILPF speaks at a NAP zonal consultation for the southeastern region of Nigeria. (Photo Credit: WILPF-Nigeria)

Nigeria launched its second National Action Plan for the period of 2017 and 2020 on 9 May 2017. In an inclusive and participatory process, in which WILPF-Nigeria, who led the action to create a Women’s Situation Room in Nigeria, actively participated, the NAP was developed to incorporate emerging issues (i.e.: violent extremism and other post-conflict and reintegration issues). The NAP also addressed the gaps identified in the first NAP (i.e. absence of crisis management and recovery strategies and inadequate monitoring and evaluation architecture).

A comprehensive and inclusive review of the implementation of the Women, Peace and Security Agenda at the national level is another important step for Nigeria. The second NAP was developed in the process of rigorous, robust and inclusive zonal consultations in all political zones of Nigeria, including the southeastern region of Nigeria represented by WILPF-Nigeria’s President, Joy Onyesoh. The findings from these consultations were consolidated and addressed in the updated NAP, and the NAP’s validation process was also carried out. WILPF-Nigeria highlighted that the reviewed NAP is robust and detailed with clear implementation, monitoring and evaluation strategies, and reporting pathways.