Security Council (In)Action on Feminist Peace in Palestine: What is Missing? 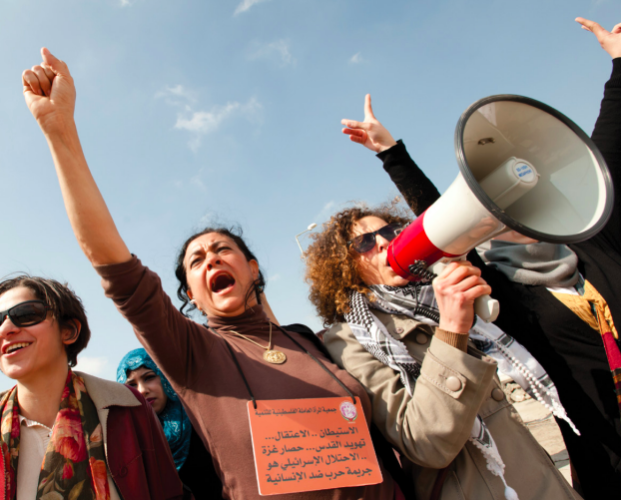 Yet women peace activists continue to take leadership in demanding accountability for action on women’s human rights and creating dialogues that build the foundation for peace.

As WILPF’s Secretary-General, Madeleine Rees, wrote back in October 2017, if the UN Security Council is going to be able to fulfil its mandate and take action to sustain peace, it must provide women in communities affected by conflict with an opportunity to give real input, analysis and information, and must use this information to take actions responsive to the diverse needs, rights and requirements of all people.

However, the UN Security Council has been unable to take effective action on the situation of Israel and Palestine with little appearance that anything will change on this in the near future.

How can the UNSC action in Palestine be revitalised in a way that makes a difference for women?

The 22 February 2018 Arria Formula Meeting on the situation in Palestine provided one opportunity for re-initiating dialogue on this intractable conflict. It had potential to open up new spaces for dialogue based on the recommendations and experiences of local women and girls. Peru, Sweden and the UK did provide important references to women's participation in the discussion. However, broader discussion that integrated gender-conflict analysis to address women’s leadership and gendered violence, such as around settlements and attacks against human rights defenders, remained a missed opportunity.

Integrating documentation submitted for the UPR review in the UNSC analysis and decision-making is not only mandated by Resolution 2282, it represents one of the avenues to mobilise a paradigm shift in the approach taken to peacebuilding, one which ensures that local women speak for themselves (rather than be spoken for), addresses women’s human rights and understands gender inequalities as one of the root causes of conflict.

As Security Council continues its work for peace, it is must build on local women’s voices, in Palestine and elsewhere, for holistic and targeted action toward sustainable and feminist peace.

The 62nd Session of the Commission on the Status of Women: Preview

In just over a week, WILPF activists from Japan, Nigeria, Lebanon, Kenya, Syria, the UK and elsewhere will join thousands of other women leaders at the United Nations Headquarters in New York for the sixty-second session of the Commission on the Status of Women (CSW62). This year, the focus of discussion is on challenges and opportunities in achieving gender equality and the empowerment of rural women and girls.

In preparation for the Session, WILPF worked to strengthen the meaningful participation of rural women across the conflict spectrum by delivering a statement on the Fulani herdsmen violence in Nigeria at the 25 January 2018 CSW62 Multi-Stakeholder meeting in New York, and advocating for strengthening language on women's meaningful participation, disarmament and accountability for gender equality and peace in CSW62 draft agreed conclusions.

During the session, WILPF International will focus on amplifying the experiences and work of our partners and sections. Join us!

We will also support mobilising youth leadership for intersectional movement building, through providing a capacity-building training for the WILPF US Student Practicum and engaging in strategic dialogues with activist and partners.

Launching the Fourth UNSCR 1325 NAP in the United Kingdom 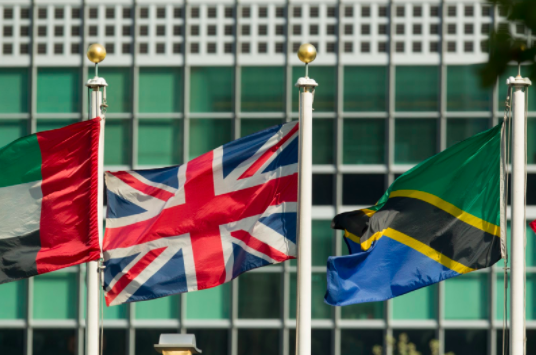 The United Kingdom launched its fourth National Action Plan (NAP) in January 2018 for a period of five years (2018-2022). WILPF’s section in the UK, a member of the Gender Action for Peace and Security Network (GAPS), along with other civil society organisations, participated in the creation of the NAP. Civil society engagement also included in-country consultations in Afghanistan, Burma, Somalia and Syria. WILPF International, Amnesty International UK and Women Now for Development, have participated in consultations with other Syrian civil society organisations and peace activists to formulate strategies on the best ways to create positive outcomes for Syrian women and girls. The NAP implementation will be monitored by the cross-government Working Group on WPS in partnership with focus country teams and civil society groups. Annual reporting to Parliament will also reflect UK activity across departments and funding mechanisms to ensure accountability for delivery of the NAP.

The updated NAP strengthens opportunities for local women civil society to initiate partnerships that address local needs in the UK’s efforts to build security and stability abroad. However, gaps remain in other key areas. Although domestic strategies such as on ending violence against women and immigration are recognised as complementary, the focus remains externally focused. This means the impact of gendered violence within the country, from immigration to the status of women in Northern Ireland, remain unaddressed. In addition, although the previous version of the NAP (2014-2017) expressed the UK commitment to control illicit small arms and light weapons, references to disarmament are missing in this NAP, particularly in reference to the consistent transfer of arms from the UK to various conflict zones in Africa and the Middle East.

Arria Formula Meeting on the Electoral Process in the DRC 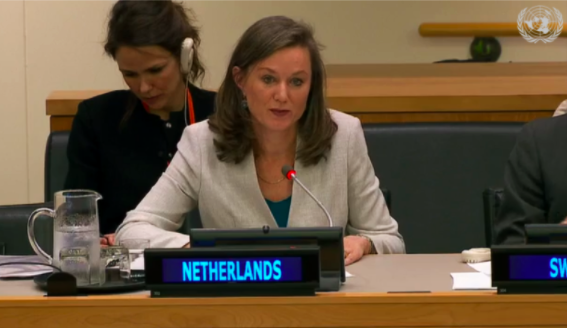 H.E. Lise Gregoire-van Haaren, Deputy Permanent Representative of the Kingdom of the Netherlands to the United Nations, delivering her statement at the Arria Formula Meeting on 12 February 2018 (UN Web TV)

On 12 February 2018, the United States in partnership with Côte d’Ivoire, Equatorial Guinea, France, the Netherlands, Sweden and the United Kingdom convened the United Nations Security Council (UNSC) Arria Formula Meeting titled “The Electoral Process in the Democratic Republic of the Congo (DRC)”. The meeting was framed as an opportunity for the UN Secretariat, African regional leaders and the international community to discuss ways to ensure that elections in the DRC are held in a timely, peaceful and credible manner in December 2018. Among the key elements that will enable this, the participants listed: democratic political space and stabilisation of security and human rights situation in the country.

Sweden, Peru and Kazakhstan all brought attention to the importance of women’s political participation, which is a critical issue. However, discussions were otherwise predominantly gender-blind. The gendered impact of armed violence on the security and development of women, and its relevance to sustainable peace, were absent from conversation. Speakers also missed an opportunity to address pressing challenges such as the impact of the new electoral law on the distribution of seats for women, small political parties and independent candidates. They also did not to address limits of MONUSCO’s ability in monitoring the pre-electoral process and preventing the crackdown on civil society. Strengthened gender conflict analysis based on local women’s voices is critical to effective action that addresses WPS commitments moving forward.

Ray Acheson: Canada Must Get On Right Side Of History In Helping To Ban Nuclear Weapons

UN Must Show More Leadership In Wake Of Oxfam Scandal

The 62nd Session Of The Commission On The Status Of Women

Report Of The Secretary-General On Peacebuilding And Sustaining Peace

How Women Influence Constitution Making After Conflict And Unrest

Gender Equality In The 2030 Agenda For Sustainable Development

Prioritise WPS To End Violence Against Women And Girls

How Women Are Building Feminist Human Security In The Americas

War From A Woman's Perspective

Women's Path To Leadership: Are We At A Turning point?

Conference on the Localization of UNSCR 1325 and Supporting Resolutions