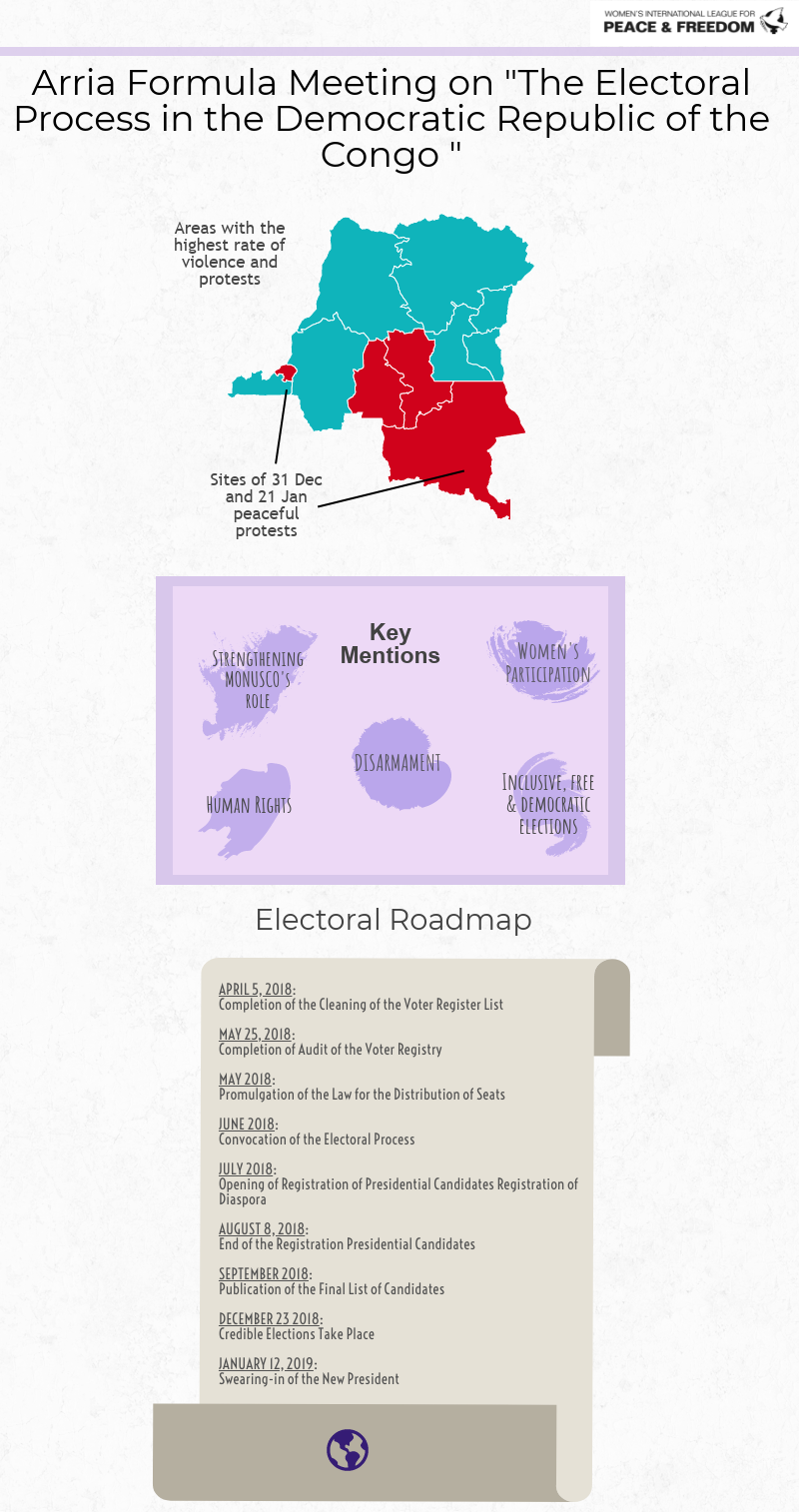 The United Nations Security Council Arria Formula Meeting titled “The Electoral Process in the Democratic Republic of the Congo” was convened on 12 February 2018, by the United States in partnership with Côte d’Ivoire, Equatorial Guinea, France, the Netherlands, Sweden and the United Kingdom. The meeting was framed as an opportunity for the UN Secretariat, African regional leaders and the international community to discuss ways to ensure that elections are held in a timely, peaceful and credible manner in December 2018. Among the key elements that will enable free, fair and inclusive elections, the participants listed: democratic political space, credible voting process and stabilisation of security and human rights situation in the country.

Speaking on behalf of CENI (Independent National Electoral Commission), Mr. Nangaa confirmed the publication of the electoral calendar and finalisation of the electoral map. He noted that the remaining tasks are the adoption and publication of the electoral law on the distribution of seats; the audit of the electoral register; the convening of candidates; as well as the training and deployment of 11,000 electoral officers. While these can be completed before 23 December 2018, Mr. Nangaa highlighted a number of significant legal, technical and security challenges that could still prevent elections from happening. First, the law on the distribution of seats must be finalised by 26 March 2018. Further, there is a need to establish 23,000 polling centres and train 640,000 temporary personnel.

Noting a general distrust towards CENI by the general public, Mr. Nackerdien, of the International Foundation for Electoral Systems, highlighted the urgency of updating the voter registry, including checking for errors and duplicate voters. The representatives of the US, Netherlands and France also expressed concern about CENI’s insistence on using an electronic voting system, which has never been used nor tested in the DRC, noting that this is an enormous risk which may undermine the credibility of elections.

As noted by the representative of France, for the outcome of the elections to be accepted by all, the government should create a climate of openness, transparency and peace where all candidates can speak freely without fear of retaliation. The speakers highlighted that the principles of inclusiveness and constitutionalism should remain key for the success of the December 2018 elections. The representatives of Sweden, Peru and Kazakhstan specifically referred to women’s participation in the elections as part of confidence-building measures necessary to restore the trust and confidence of the public in the electoral process and in the political future of the country..

The speakers noted that another element for holding peaceful and credible elections is a stable and secure environment. Several speakers, including representatives of Bolivia and Equatorial Guinea mentioned that elections in and of themselves would not resolve all of the DRC’s problems. An important accompanying measure to tackle violence is the neutralisation of all armed groups and non-proliferation of weapons across the country. Citing these as the prime instigators of violence, Equatorial Guinea strongly recommended a firm end to the illegal trafficking of weapons and minerals in and out of the DRC, while Bolivia urged the Council to look to the trafficking of arms and precious minerals as the root cause of the conflict.

Discussing the upcoming mandate update of MONUSCO, the participants called for strengthened support of the protection of civilians mandate and humanitarian aspect of MONUSCO’s performance. As suggested by the representative of the Russian Federation, MONUSCO’s key role should be in relieving the security situation and addressing the problem of illegal armed groups in the eastern part of the DRC.

Lastly, the speakers touched on the worsening human rights situation in the DRC as an indicator of the Kabila administration’s willingness to strengthen his grip on power and postpone peaceful and credible elections. Many condemned the government’s actions and excessive use of force during the peaceful demonstrations of 21 January 2018 and 31 December 2017. Mr. Lacroix reported that allegations of human rights abuses by state agents had increased by 25% from 2016 to 2017. Meanwhile, Ms. Sawyer of Human Rights Watch highlighted government responsibility for the increased violence in the country, including the murders of Michael Sharp and Zaida Catalan from the UN Group of Experts. The speakers called for the immediate release of detained political activists and the respect of fundamental freedoms and human rights as necessary components for holding of a peaceful and credible elections in December 2018.

Response of the DRC Government

The Congolese representative addressed earlier concerns and allegations by previous speakers in relation to the political, financial and human rights issues. He asserted that his presence at the meeting was a clear demonstration of his government’s interest in holding the 2018 elections. He also reported that the government has taken major steps towards achieving this, including the appointment of an Opposition minister, as well as the finalisation of the electoral register on 31 January 2018. He also contended that the DRC has had to rely primarily on its own resources to fund the entire electoral process because most international financial support was used to finance civil societies and NGOs instead of the actual running of the elections.

In response to Ms. Sawyer’s Human Rights Watch report, the representative retorted that the DRC “is not a hellhole for human rights” and that there are institutions dedicated to respect fundamental freedoms in an already-charged political environment. One of the examples stated was of a Senior Judges Commission set-up to adjudicate, on a case-to-case basis, detained political activists. The representative reported that the Commission has released all 11 persons on the list provided by the US Embassy and almost all persons on the list provided by the European Union. In closing, he emphasised that the government had no involvement in the murders of the 2 UN Group Experts and stated that an accusation of such a magnitude should be supplemented with irrefutable proof.

Out of a total of 26 speakers, only 4 (15%) - Sweden, Peru, Kazakhstan and UN DPKO - referenced participation of women, both as candidates as well as voters, as a necessary component to an inclusive, free and democratic elections in the DRC. Sweden and Kazakhstan, in particular, recognised the inclusion of women in politics to widen political space and foster sustainable peace. However, the speakers failed to assess the recent electoral law that reduces the likelihood of small political parties and independent candidates gaining seats and to acknowledge that women who want to run for elections independently face major obstacles, where some women are either forced to enter political parties and to take on positions without their consent. Further, while speakers called for the urgency of finalising the electoral law on the distribution of seats, they did not address the efforts made to enable women’s meaningful participation in elections.

The speakers discussed the situation of human rights defenders and political activists, including violent repressions of peaceful protests in Kinshasa by security forces on 31 December 2017 and 21 January 2018. Many speakers regarded the necessary components for the holding of peaceful and credible elections in December 2018 as: the immediate release of detained political activists, accountability for human rights violators, justice for victims of human rights abuses, and a general respect for fundamental freedoms and human rights. However, no specific recommendations were proposed, including for investigations into the excessive use of force by security forces on peaceful demonstrators. Also left unaddressed was the draft law implementing constitutional provisions on Freedom of Assembly, which has been under consideration for 3 years but still not adopted.

Discussing MONUSCO’s mandate renewal, the speakers were focused on strengthening the protection of civilians mandate and increased involvement in addressing security situation. However, little was proposed to ensure that MONUSCO is able to respond to the current challenges in the DRC. For example, no specific recommendations were given to make MONUSCO more effective in addressing the needs of civil society and women’s groups. The speakers also failed to state the importance of working with women civil society to strengthen gender analysis and perspective in MONUSCO’s work.