National Action on Women, Peace And Security: Year In Review 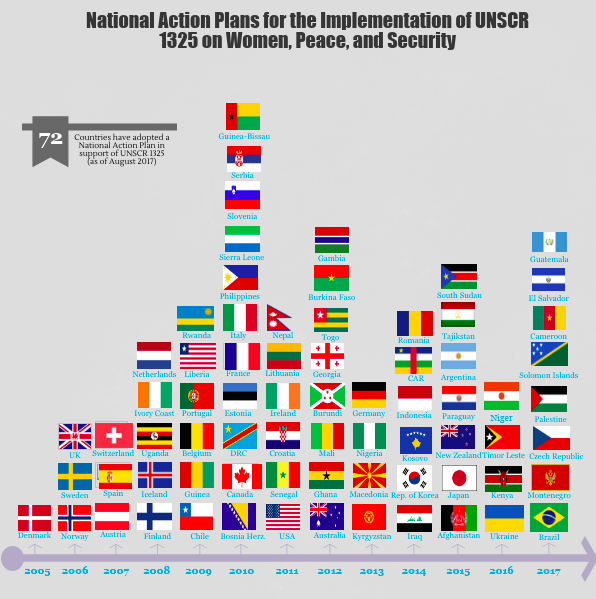 72 National Action Plans developed and launched by UN Member States for the implementation of UNSCR 1325 as of December 2017. (Visual: WILPF)

In 2017, Member States continued to demonstrate their renewed commitment to the implementation of the Women, Peace and Security Agenda, while several attempted to combine this Agenda with a more general gender policy framework.

Despite this progress, of the 72 NAPs adopted to date, only 17 (23%) include some allocated budget for implementation. Furthermore, only 22 of 72 existing NAPs (30%) include references to disarmament and provide specific actions to disarm society and control the illicit trade of small arms. Despite some of the countries’ recent history of conflict or involvement in military intervention and arms trade, there is insufficient analysis and consideration of the connection between disarmament, gender equality and violence.

Civil society has always been essential in developing effective and balanced NAPs. However,  when it comes to drafting, implementation, evaluation and monitoring NAPs, civil society’s level of engagement and roles vary. To date, only 44 NAPs (61%) allocate a specific role to civil society on different stages of the NAP implementation process. The work of WILPF Cameroon provides a strong example of the importance of civil society leadership in the NAP development and related work on gender equality and peace: with support from WILPF's Women, Peace and Security Programme over the past few years, WILPF Cameroon has taken the initiative to propose the creation of a NAP, and this year successfully launched a NAP for Cameroon!

Moving forward, it is important for Member States to ensure that they create dedicated spaces for civil society to help develop and implement NAPs, while providing holistic and well sourced funds with clear leadership and accountability for implementation.

Find WILPF’s database of the National and Regional Action Plans on Women, Peace and Security here>