From Gender Parity to Addressing Root Causes: Why Moving from Engaging Men to Transforming Violent Masculinities is Critical at #UNGA72 and Beyond
By Abigail Ruane, WILPF’s Women, Peace and Security Programme Director 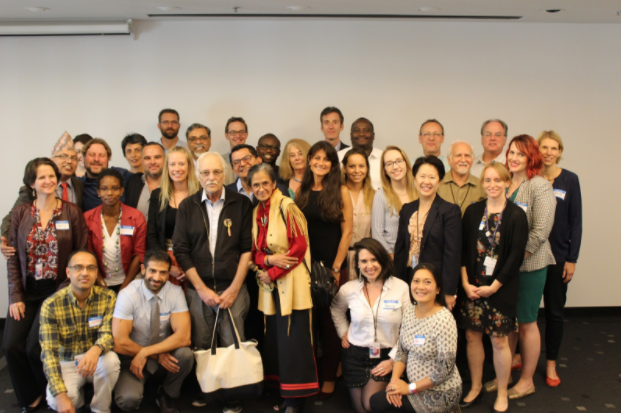 How should activists navigate the tension between (on one hand) creating spaces for radical feminist visioning and (on the other) mainstreaming feminist visions into patriarchal institutions? How can we create deeply rooted action with broad impact and prevent a watering down of a transformative agenda?

This past week I was fortunate to represent WILPF as a board member at a State of the Field Dialogue and related meetings of the MenEngage Alliance, a network of civil society organisations working with men and boys to promote women’s rights and gender equality. WILPF works with the MenEngage Alliance because we believe that engaging men and boys to transform violent masculinities is a critical part of transforming gendered power and mobilising for feminist peace. As the WILPF Manifesto notes, “One aspect of WILPF’s pursuit of peace therefore will be working to transform gender from a power relation to one of partnership”.

The space at these discussions was remarkable for its self-reflective awareness, personal to political analysis and cultivation of a community of practice for a feminist peace alternative in our world. As others at WILPF have found, this network’s community invoked an inspiring feminist space, full of inclusivity, rebellion, respect, liberation, participation and a feminist curiosity and electricity.

For me, the power of this convening lays in the fact that this network is not just about “engaging men” but about transformatively engaging men to create gender equality. This requires that “change starts with me” but also that change goes to the roots. As a result, the members of the Alliance are committed first and foremost supporting women’s existing work, also to a political agenda that eradicates patriarchal violence from personal relationships to global institutions of militarised and patriarchal power.

As the 72nd UN General Assembly (UNGA72) General Debate and High Level Week kick off this week, much could be learned from the feminist men and women I met during the MenEngage convening on how to address long-standing obstacles and create a better world for all of us.  With the 13 September 2017 launch of Secretary-General Guterres’ UN Strategy Gender Parity, and on-going discussions of a UN-wide prevention platform, steps are being taken to address longstanding gaps. However, whether these steps are transformative or not will depend on whether the action goes beyond “engagement” and towards addressing root causes for a better alternative of non-violence, gender justice and peace.

Patriarchal security institutions undermine the human security of women, LGBTQI, indigenous and other at-risk groups and provide an unsustainable and short-term solution. Supporting women’s leadership in mediation, stigmatising sexual exploitation and abuse, preventing trafficking and strengthening financing are critical and important asks. However, more is needed.

As the Friends of Women, Peace and Security and Gender Champions come to UNGA72 this week, they must look for opportunities to transform violent masculinities and patriarchal power for transformative action and find ways to invest in women’s livelihoods and justice critical to addressing on-going prevention gaps. Adding state signatures to the historic Nuclear Ban Treaty at the 20th September 2017 Signing Ceremony is one of these opportunities, and would support seventy years of women-led anti-nuclear movement for peace.

Will UNGA be a space to engage men in the status quo? Or rather will it be a space to begin to transform violent masculinities and eradicate patriarchal violence?

Let’s – all of us – call on our governments to step up. 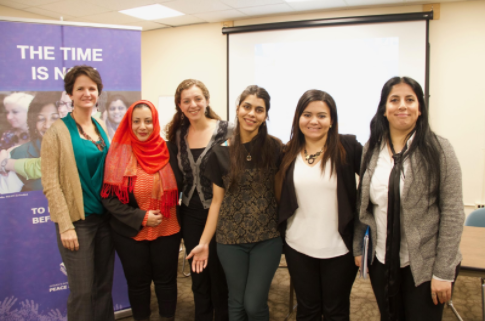 WILPF International and a special delegation of women peace leaders from Syria, Yemen and Libya at the 16th Anniversary of UNSCR1325 (Photo: WILPF/Marina Kumskova).

In October 2000, in response to pioneering advocacy by women-led civil society, world leaders on peace and security adopted the historical United Nations Security Council (UNSC) Resolution 1325. For the first time, it recognised women’s important role in conflict prevention through post-conflict reconstruction. This year, the UN Security Council will hold the 17th Anniversary of the Women, Peace and Security (WPS) Agenda under the presidency of France.

WILPF is planning on bringing an international delegation, including women activists from Colombia, Nigeria and Yemen to mobilise for Feminist Peace based on women’s meaningful participation and address the root causes of violence. We will also continue our monitoring and analysis with a focus on sustaining Feminist Peace.

As the Global Study on UNSCR 1325 recognised, civil society are critical contributors to the development and effective implementation of the Women, Peace and Security (WPS) Agenda. As the April 2017 WILPF Geneva Conference on strengthening women’s meaningful participation at the UN found, overcoming longstanding obstacles to meaningful participation, including by strengthening information, access and accountability on follow-up is critical to move the WPS Agenda forward.

If you are interested in joining WILPF in New York, please reach out to Sandra Barron (sandra@peacewomen.org) for more information.

Inside the UN Security Council: The Contribution of Peacekeeping to Sustainable Peace 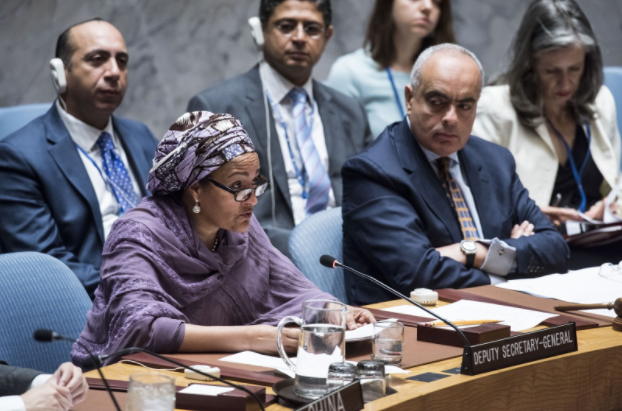 On 29 August 2017, Egypt hosted an open debate entitled, “United Nations Peacekeeping Operations: their Potential Contribution to the Overarching Goal of Sustaining Peace”. The aim of the discussion was for Member States to consider how peacekeeping operations can more effectively contribute to sustaining peace. In the debate, Member States recognised the need to develop a new “strategic compact” for sustaining peace. This compact is intended to articulate a context-sensitive approach to the development of peacekeeping mandates, outline the primary responsibilities of the host country, as well as the supportive role of the United Nations, and include time-bound performance benchmarks to ensure mutual accountability.

While women’s political leadership in the peace processes across the conflict cycle was recognised as a cornerstone of sustainable peace, the speakers have barely addressed the problem that may significantly affect sustainability of the peacekeeping work. UN Peacekeeping Missions have been the target of budgetary cuts over recent months, resulting in cuts to staff positions responsible for overseeing the implementation of the Women, Peace and Security (WPS) Agenda at the mission level. In this context, it will be critical for such discussions to address concretely how financial and political support will promote gender equality commitments moving forward.

UNGA Side-event: High-Level Forum on the Culture of Peace

By Alexandra Rojas and Anne Lescure 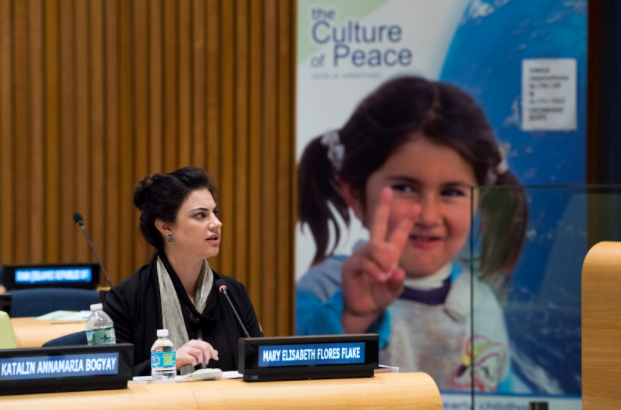 Mary Elizabeth Flores Flake, Permanent Representative of Honduras to the UN, during the General Assembly the High-level Forum on the Culture of Peace (Photo: UN Photo/Kim Haughton).

On 7 September 2017 the President of the 71st Session of the United Nations General Assembly (UNGA71), Peter Thomson, convened a High-Level Forum on the Culture of Peace under the theme: “Sowing the Seeds of the Culture of Peace: Early Childhood Development is the Beginning”. The Forum was an opportunity for the representatives of Member States and other stakeholders to exchange ideas on further promoting a Culture of Peace throughout the world. In the face of diverse global challenges and multifaceted threats to stability, the speakers highlighted education, doctrines of non-violence, access to justice and deepened international cooperation as critical tools to spread the Culture of Peace. While the speakers recognised women as important partners to spread ideas of tolerance and non-violence in conflict-torn societies, their statements largely failed to include any concrete recommendations for strengthening women’s formal political engagement.

Reinforcing the power of Article 26 of the UN Charter, which demands the minimising of spending on armaments, and Critical Area D of the Beijing Platform for Action, which links gender equality and the call for the control of excessive arms spending, the speakers reiterated the importance of reducing military spending and redirecting this expenditure towards sustainable peace and development. Most notably, in her opening statement, Dr. Betty Williams, the 1976 Nobel Peace Prize Laureate, claimed: “Why do we have military budgets? To create weapons to destroy each other? That’s insane!”. The speakers therefore agreed that militarisation cannot be part of the international community’s efforts to build a Culture of Peace.

WILPF Webinar: Women’s Role in the Implementation of the Peace Agreement in Colombia On 25 September 2017 at 9:30AM EST, WILPF’s section Colombia (LIMPAL) will host a webinar (in Spanish) on the current situation of peace in Colombia. The peace process in Colombia is acknowledged worldwide as exemplary because women were an integral part of the negotiation process and significant references to women’s rights were included in the final agreement. However, ensuring women’s meaningful participation in the implementation phase and effective accountability for the agreement’s gender commitments will be critical for sustaining peace.

In the webinar, LIMPAL will provide a feminist-pacifist analysis of the current efforts to implement the peace agreement in Colombia, evaluate the prospects and challenges to the implementation and propose ways in which the implementation of the agreement and the role of women-led civil society in this process can be strengthened for feminist and sustainable peace. 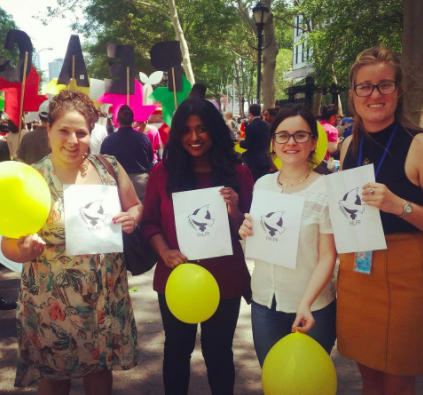 Are you interested in peace, disarmament and gender justice? Join our team!

We are looking for young professionals and academics interested in the Women, Peace and Security (WPS) Agenda in an effort to provide professional development skills and opportunities for engagement with civil society on the implementation of the WPS Agenda at the local, national and international levels.