Webinar: Women’s Role In The Implementation Of The Peace Agreement In Colombia

On 25 September 2017, WILPF’s section in Colombia, held a webinar entitled, “Women’s Role in the Implementation of the Peace Agreement in Colombia”. The webinar presented a feminist pacifist analysis of the current efforts to carry out the peace agreement in Colombia. The panelists evaluated the opportunities and challenges of the implementation process and proposed ways in which the agreement’s execution, and the role of women-led civil society, can be strengthened for a feminist and sustainable peace.

The webinar also followed up on the webinar “Feminist Peace, A Tradition of Women Peacebuilders”. This webinar sought to analyse and discuss the roles that civil society, and in particular women-led civil society, can assume in order to promote the full implementation of what has been agreed upon between the Colombian government and the Revolutionary Armed Forces of Colombia (FARC-EP).

The webinar began with a brief introduction by Rebeca Taboada García from LIMPAL Colombia about WILPF’s history, its various programmes, and its work globally, in particular on its work in Latin America.

Following this, Carmen Magallón Portoles, President of WILPF’s section in Spain, introduced what is feminist peace. Magallón mentioned that the idea of “feminist peace” was born out of the start of WILPF with the notion that women should be involved in international politics. “Our feminist peace tradition is very potent in inserting us in the international dialogue,” Magallón said. Like WILPF’s integrated approach to peace, feminist peace is focused on the lives and roles of women in conflict and post-conflict situations, as well as on non-violence and disarmament. Feminist peace is seen as a union between purpose with methods where liberation from oppression brings about peace with justice. In her concluding remarks, Magallón called to action all global advocates involved in feminist peace to maintain the dialogue with each other and that they can always count WILPF Spain to support their efforts.

Next, Diana María Salcedo López, LIMPAL Colombia’s Deputy Director, gave a brief introduction on LIMPAL Colombia and then  proceeded to analyse the implementation of the Colombian peace accords from a feminist pacifist perspective, discussing in details three points in the peace agreement that deal with Women, Peace and Security. Point 2 on political participation includes 17 measures that affirm women’s participation. This includes  guaranteeing that women have a seat at the table at high-level meetings, having at least three women representatives on the National Peace Council and creating a special monitoring body on women’s rights in the implementation of the peace agreement. Point 3 on the end of conflict includes guaranteed measures on security for women former-combatants while reincorporating to civil life. Point 5 deals with victims of the conflict, which naturally lends it to evaluating it through a gender lens since the majority of victims and survivors in any conflict are women.

Salcedo listed three areas of concern in the implementation of the peace agreement, which are (a) unequal representation of women in the new congressional seats that have been created, (b) the lack of a law asking for differential punishment for small-scale women producers or cultivators of illicit drugs, and (c) the Special Justice Peace Project (JEP) statutory bill which has no clear or concrete mechanisms for the participation of victims and their organisations. Moreover, the narrow definition of violence against women as only being sexual assault does not take into consideration the myriad ways violence affects women in conflict situations.

The webinar concluded with the final speaker, Mayda Roldan Velasquez, coordinator of WILPF Colombia’s Meta Office, which is situated in the southeast of the country in the former FARC territory. Roldan discussed the impact the conflict has had in Meta, which as of the day of the webinar counted 248,480 victims attributed to the conflict in Meta alone. Women’s participation in the peace process in Meta has been lower than what WILPF Colombia would hope for, but the peace agreement has opened areas of Meta that before were unsafe for women to venture in and women are able to go late at night as well.

After the speakers’ presentations concluded, the webinar then moved to a vibrant Q&A session. The speakers have agreed that peace is a process and that any progress towards achieving it requires more than just signing the Final Peace Agreement. The national legal framework developed on the basis of the peace agreement does not incorporate a gender analysis or fully address women’s specific needs. Despite opportunities, this presents new challenges for the effective exercise of women's rights and for strengthening gender equality in general. The end of the conflict represents a historic opportunity to establish gender power relations and undergo a new gender-sensitive social transformation. This transformation will contribute to the improvement of women’s rights and provides an opportunity to find a new path for coexistence, building social cohesion and ensuring a proper foundation for sustainable and lasting peace. 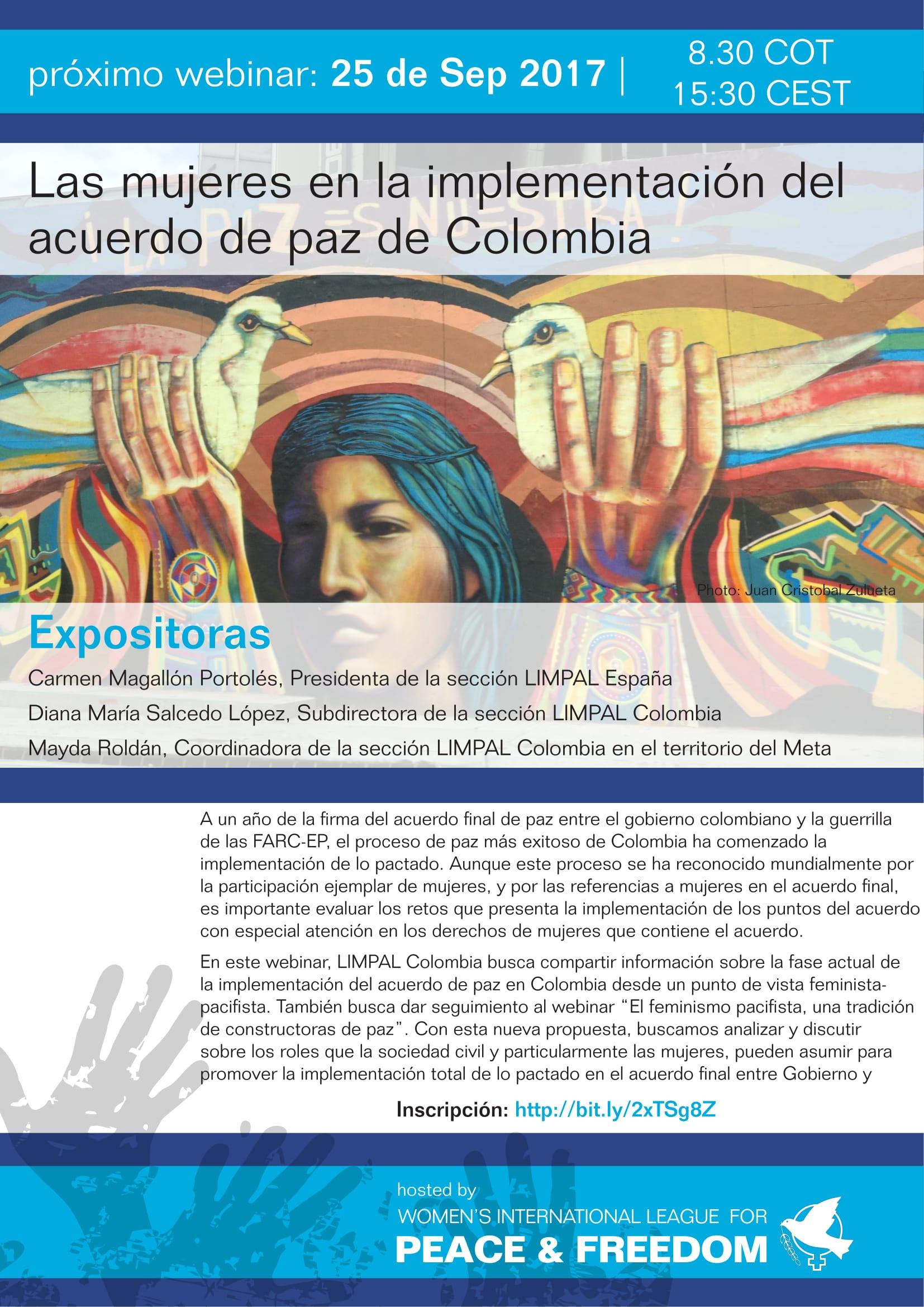 Webinar: Women’s Role In The Implementation Of The Peace Agreement In Colombia