Editorial: From Marching to Movements: Steps of Solidarity for Feminist Peace 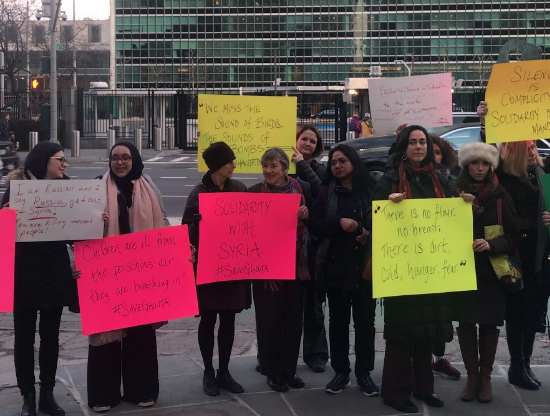 A protest in support of Syrian women under siege in Eastern Ghouta (Photo: WILPF)

On 20 January 2018, Women’s Marches swept the world. Over a million people from New York to Nairobi to Sydney to Osaka demanded action to enable women’s participation and access to rights, and stop the epidemic of violence against women voiced by the #MeToo movement.

From 12 to 23 March 2018, over 4,000 feminist activists leveraged the 62nd Commission on the Status of Women (CSW62) as a touchstone for feminist visioning and gender mainstreaming worldwide. They marched for a ceasefire in Syria, marched to protect women human rights defenders like #MarielleFranco in Brazil from attacks, and marched to affirm that activism is not terrorism.

On 24 March 2018, over 800 marches took place in the US and around the world to protest gun violence. Building on the leadership of racial justice activists who rejected police violence and affirmed that #BlackLivesMatter, the youth-led March for Our Lives demanded protection for people, not guns.

But is all of this marching making a difference?

On 12 March 2018, tenacious Syrian activists briefed the Security Council as they were trapped in basements by relentless bombing in Eastern Ghouta –  a place the UN Secretary-General has called “hell on earth.” Yet the Council continues to be at an impasse.

Thank to the leadership of Sweden and other progressive non-permanent Security Council member states, more and more women peace activists have an opportunity to brief the Council to demand action that makes a difference for women’s security and lives. But the disconnect between women’s recommendations and Security Council action is increasingly stark.

In the context of dysfunction by the world’s highest security body, sidelining by many member states, and broad gaps between current approaches and security that works for women, it can be anguishing to continue marching and advocating.

How long must we wait? When will our time come?

As we agonise, advocate, and march, we must remember: marching is only the leading edge of activism when it comes to social change. Protests are important for pushing political action on key advocacy issues, from getting guns out of schools in the U.S. to out of the streets in Syria. But they also are part of broader political mobilising. They create space to build connections, solidarity, and leadership, and can have ripple effects that bend the arc of history toward justice: the constant dripping of water eventually hollows out a stone.

Whether in small steps or large, women and men allies are choosing to amplify local women’s voices. They are supporting each other in addressing gaps in broken systems and transforming those systems from the inside out. Some are positioned to support policy advocacy, while others are positioned to mobilise. All have a role to play.

We are not alone. We march together. And with our powerful feet and voices, together, we are making change.

Next Steps For Rural Women After #CSW62: Enabling Gender Conflict Analysis And #MeaningfulParticipation 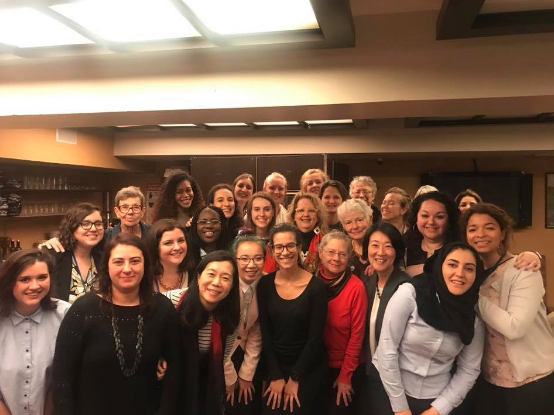 In the last two weeks, WILPFers from Afghanistan, Democratic Republic of the Congo (DRC), Japan, Lebanon, Nigeria, Syria, and elsewhere joined more than 4,000 women activists at the 62nd Session of the Commission on the Status of Women (CSW62) to mobilise action around the situation of rural women and girls, including in conflict.

During the session, WILPF International advocated behind the scenes, strengthened feminist movement and amplified the experiences and work of our partners and sections. They brought attention to the impact of Israeli Occupation on women’s security and rights in Palestine, the experiences of women under siege in Syria, the impact of the Fulani herdsman violence in Nigeria, and historical challenges to inclusivity within social justice movements in the U.S. They showed how women peace activists are breaking the silence in male-dominated media platforms in Egypt and called to ensure an inclusive peace process in the Koreas with women at the table.

The documents adopted at the CSW62 provided some hope for change. The Agreed Conclusions, the first agreed language on the situation of rural women in CSW’s 62-year history, strongly address structural barriers to the empowerment of rural women, including the lack of access to land rights, economic resources and justice, and welcome the work of feminist groups and women human rights defenders. Member States also decided that the 25th Anniversary of Beijing in 2020 will take the form of a High Level Meeting on the margins of the 75th Session of the General Assembly’s General Debate, preparations for which will be accompanied by a civil society push for strengthened accountability and action.

Read WILPF US’ reflections on the CSW62 here>> 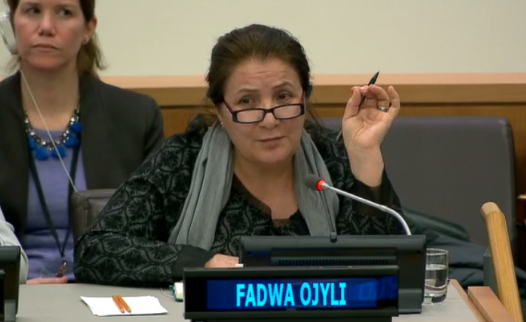 The UN Security Council Arria Formula Meeting titled “Implementing Syria’s Cessation of Hostilities: A Syrian Perspective” was convened on 12 March 2018 by the United Kingdom, the Netherlands, Poland and France. It was an opportunity to draw attention to the urgent need for the full implementation of newly-adopted UNSC Resolution 2401. Speakers called for an immediate end to the hostilities, urgent delivery of humanitarian aid and strengthened protection for humanitarian workers and medical facilities. Many also highlighted the need for women’s participation, firm political solutions and disarmament as essential elements of building peace.

It is worth noting that the resistance of Eastern Ghouta civilians under siege and the ability of women activists like Ms. Nivin Hotary to communicate their situation to the world has brought a new dimension to the role and status of Syrian women in the peace process. The Council however continues to fail on Syria. The humanitarian ceasefire has not been implemented. Political will for a political solution, much less with women's participation and rights at the table, remains fractured. And humanitarian aid faces continued obstacles, with particular implications for the April Brussels humanitarian aid conference. Supporting confidence building focused on women's participation and gender equality action is critical to moving beyond the impasse and taking political action to end the ongoing atrocities.

Read our full analysis of the Arria Formula Meeting here>> 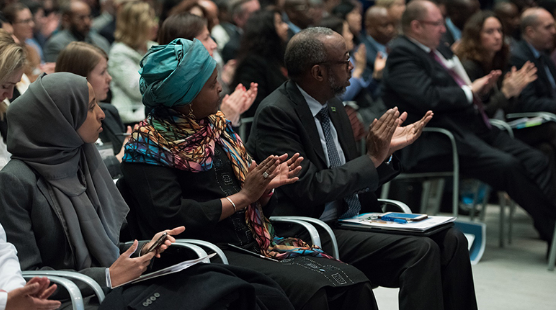 Some of the participants of the 2018 Fragility Forum in Washington DC (Photo: World Bank)

On 5-7 March 2018, the World Bank held the 2018 Fragility Forum in Washington, DC, where relevant stakeholders met to search for new and innovative ways to foster peace and stability. As part of WILPF’s work to #MoveTheMoney from war to gender equality and peace, WILPF participated in this event with a goal to identify opportunities for strengthening multilateral action, addressing the root causes of violence and moving from political economies of war to economies of peace and gender justice.

Under the umbrella of a joint World Bank-UN Pathways for Peace Report, the Forum affirmed that the best way to prevent crisis is through investment in inclusive and sustainable development. However, the discussion fell short when it came to strengthening a gendered approach in conflict prevention. To prevent and manage risks to peace and stability, it is essential to address the root causes of conflict and violence and promote women’s human rights and political economies of justice and peace. As WILPF’s work has demonstrated, it requires reorienting work around local women’s voices for nonviolence and justice, and strengthening feminist movements. 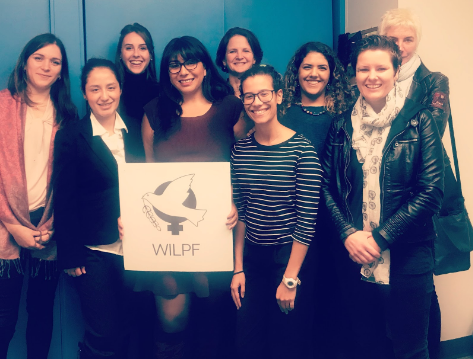 Find the full description of the fellowship here>>

WILPF US CSW62 Reflection: Is This What Feminist Movement Building Looks Like?

WILPF At The #CSW62: Strengthen #MeaningfulParticipation And Integrate Gender Conflict Analysis In Action

Statement To HRC37: The Importance Of Consistent Gender Analysis In UN Reporting On Syria

Statement To HRC37 On The OHCHR Report On Libya

Open Letter To The UN Envoy To Yemen From Yemeni Women

Leveraging Financing For Feminist Peace: What More Can Be Done?

Women's Voice For Rights And Equal Participation In Colombia

Liberal MP Wants To Establish An Ambassador Of ‘Women, Peace And Security’

Masculinity And War - Let's Talk About It

Peacebuilding Through A Gender Lens

OPEN: Registration For Towards An Inclusive Peace

2018 Application For The Women PeaceMakers Program Is Now Open

Women In The Global Aid Sector Are Saying #AidToo

Don’t Bank On The Bomb