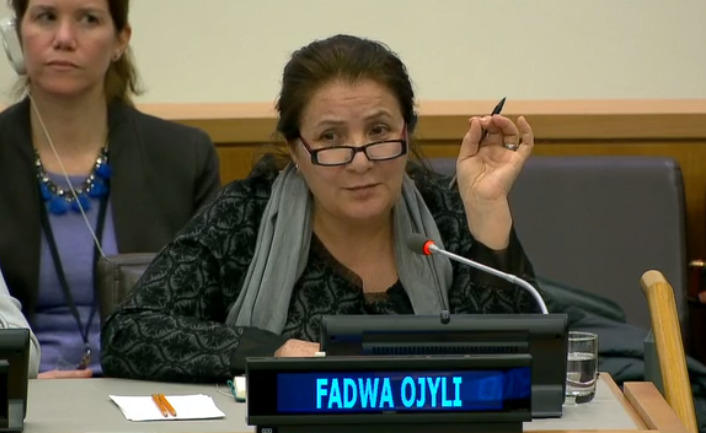 The United Nations Security Council (UNSC) Arria Formula Meeting titled “Implementing Syria’s Cessation of Hostilities: A Syrian Perspective” was convened on 12 March 2018 by the United Kingdom, the Netherlands, Poland and France. The meeting was an opportunity to draw attention to the urgent need for the full implementation of UNSC Resolution 2401 (2018) through an informal dialogue with civilians from Eastern Ghouta and those who provide services on the ground. Speakers called for an immediate end to the hostilities, urgent delivery of humanitarian aid, and strengthened protection for humanitarian workers and medical facilities. Many also highlighted the need for women’s participation, firm political solutions and disarmament as essential elements of building peace. It is worth noting that the resistance of Eastern Ghouta civilians under siege, and the ability of women activists like Ms. Nivin Hotary to communicate their situation to the world, has brought a new dimension to the role and status of Syrian women in the peace process.

The meeting began with separate speeches by Nivin Hotary and Sirag Mahmoud, civilians from Eastern Ghouta, via video teleconference. Ms. Hotary and Mr. Mahmoud expressed their outrage and disappointment at the Council’s failure in leveraging UNSC Resolution 2401 to end hostilities in Syria and to create a neutral environment for a credible political process. According to their first-hand recount, the hostilities have intensified in the two weeks since the passing of the Resolution. Constant shelling continues to prevent the delivery of aid, food and supplies, forcing most of the population to survive on one meal a day. Chemical attacks, including napalm and sarin attacks, also persist in direct violation of international law.

Intensified hostilities in Syria have significantly worsened the humanitarian situation in the country, as reported by the humanitarian workers. Mr. Alkatlaby of VDC reported that over 100,000 people in Eastern Ghouta urgently require medical evacuations. According to his  report, the blockage of key routes in and out of Eastern Ghouta, by Syrian forces are aggravating conditions. While he acknowledged that the delivery of humanitarian aid to besieged areas is naturally challenging, Dr. Tarakji of SAMS questioned the Council’s ability to provide effective and timely aid. He noted that SAMS, a small non-profit organisation, has by itself successfully delivered about 10% of the amount of aid delivered by all UN agencies combined. He further noted that Resolution 2401 has taken no serious action to ensure the protection of UN convoys and humanitarian workers. To address this, he called for UN agencies to utilise various mechanisms to ensure that humanitarian aid reaches people on the ground.

Confirming civilians’ accounts , humanitarian reports at the meeting revealed that attacks on medical facilities and medical personnel have indeed increased in the past two weeks. According to Dr. Tarakji’s report, only 107 doctors remain in Eastern Ghouta to treat over 400,000 civilians, and even then, they do not  have enough essential medical supplies because the Syrian regime’s security forces are allegedly removing medical supplies from UN agency convoys. Other speakers condemned what they saw as the Council’s only action in relation to the protection of humanitarian personnel, that is: the acknowledgment of their deaths.

To achieve the full and effective implementation of Resolution 2401, some speakers emphasised the need for Syrian women to participate in political processes. According to Ms Ojyli of SNC, one key challenge that obstructs the full and effective implementation of the Resolution is the absence of women from political and peace processes; many of whom remain arbitrarily detained. In a persisting cycle, this discourages women from participating in political processes against the backdrop of intense conflict and militarised violence.

Lastly, many speakers pointed out the limitations of existing UN Security Council mechanisms in achieving peace in Syria. The lack of agreement among Member States, for example, has manifested in the regular Chinese and Russian use of the veto  - an instrument which Eastern Ghouta residents have referred to as permission for the massacre of thousands of people in the region. In the same vein, the representative of Peru inquired about the slowness of the Astana process, which limits the possibilities for improvements in peace processes.

Out of a total of 18 speakers, only 2 civil society briefers (11%) - Ms. Jalabi and Ms. Ojyli - referenced the participation of women in the Syrian political process as essential for ensuring lasting peace in the country. However, they did not elaborate on how to empower Syrian women, particularly through civil societies and women’s groups, to contribute to the full and effective implementation of Resolution 2401. No mention was made, for example, on the importance of financial and technical support for the meaningful participation of women’s groups and civil society. Speakers failed to stress financial and technical support for Syrian civil societies and WHRDs working in the field, in order to allow them to safely continue their essential work. In this regard, an opportunity was missed to call upon the Council to work with the Office of the Special Envoy for Syria in strengthening and enhancing the role of women’s groups for revitalising the peace process. This is particularly concerning because the meeting provided a great opportunity to strengthen the meaningful participation of women groups and civil societies in all aspects of the peace process, including in preparatory and official discussions for the upcoming Brussel’s aid conference in April.

Apart from demanding basic food and medical aid, speakers failed to call for other critical assistance like humanitarian visas for cross-border protection, psychosocial services and non-discriminatory medical services. Although Ms. Jalabi called for the support of women refugees in Turkey and Germany, there was no elaboration on the actual types of support required. While much mention was made of UN agency convoys and their inadequacies, there were also no mention of how Syrian NGOs and other relevant international actors, like Turkey and Jordan, can work together to streamline coordination mechanisms in the delivery of adequate humanitarian aid. Lastly, the speakers missed an opportunity to emphasise the importance of gender-sensitive care in the operations and delivery of humanitarian assistance, including women’s shelters and social programs that have greatly benefited women in Southern Syria.

Many speakers called for the Council to hold Syrian and Russian forces to account for both indiscriminate chemical and non-chemical attacks on aid convoys, medical facilities, and civilians in opposition-held areas in Ghouta. However, speakers missed an opportunity to recommend or reiterate specific mechanisms to facilitate the accountability process and ways in which existing mechanisms like the International, Impartial and Independent Mechanism (IIIM) can be revitalised to deliver justice.

Apart from two briefers’ references on women’s political participation, the discussion remained predominantly gender-blind. Also absent from discussions was the gendered impact of armed conflict on the security and development of women, and its relevance to sustainable peace. In this regard, the Council should: