Why Does Women, Peace and Security Financing Matter? 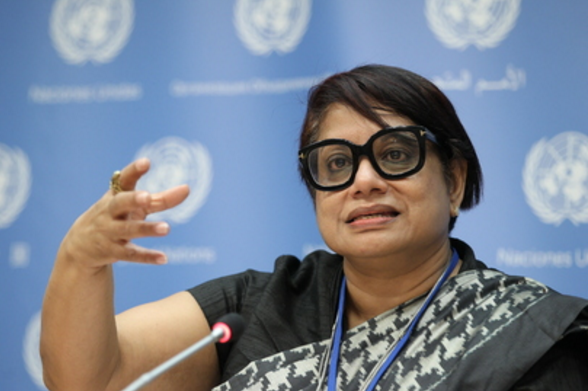 Fifteen years after UNSCR 1325 and the establishment of the Women, Peace and Security Agenda, we have a strong normative framework but ineffective implementation for accountability.

One of the main roadblocks to implementation is a lack of sufficient funding for gender equality and peace. Only about 10percent of UNSCR 1325 National Action Plans include dedicated budgets; only two percent of aid to peace and security for fragile states in 2012-2013 targeted gender equality; and Member States only limitedly and inconsistently have begun to integrate women’s human rights and gender equality into national budgets. Meanwhile, in 2015, there was a global military spend of $1.6 trillion, over $4 trillion allocated to bail out banks, and over $6 trillion sequestered in corporate tax havens. As this demonstrates, the problem is not a lack of funding, but a failure to effectively use existing funding to promotes human security based on women’s lives and experiences.

The fact that women’s rights are human rights should be enough to implement the Women, Peace and Security Agenda. However, there are more reasons for accountability as well. Studies have shown that women’s participation increases the probability of a peace agreement lasting at least two years by 20 percent, and the probability of a peace agreement lasting 15 years by 35 percent (Global Study, 2015). How well women are treated within a society is the number one predictor of a state’s peacefulness in the international community (Hudson et al., 2014). In addition, feminist movement building has also been demonstrated to be the strongest predictor of policies on reducing violence against women (Weldon and Htun (2013). The reason to #MoveTheMoney is clear: If the international community wants peace and security, it cannot keep under-funding and under-valuing gender equality.

Read our Fact Sheets: Key Lessons Learned from the Global Study on UNSCR 1325

Does Militarism Lead to Violence?

“[M]ilitarism serves to uphold and perpetuate structural inequalities that in turn operate to disenfranchise women and girls from public goods, entrench exclusion and marginalisation, and create the ingredients for a platform of broader inequalities that increase the potential for violent conflict to occur”

Militarism normalises and legitimises gender inequality and military action. However, militarism is about more than just the military industrial complex. Militarism as a way of thought affirms the idea that we live in a dangerous world and that we need just warriors to protect beautiful souls. It relies on gendered and racial understandings to value things associated with the military and devalue things associated with non-violence. Militarism and cultures of militarised masculinities create a climate of political decision-making in which resorting to the use of force becomes a normalised mode of dispute resolution. In doing so, militarism enables the legitimisation and continuation of violence.

Does Gender Equality Lead to Peace?

“All oppression creates a state of war.”

Gender equality is the number one predictor of peace – more so than a state’s wealth, level of democracy, or religious identity. Gender equality is also an obligation: because women are human beings, states are obligated to overturn obstacles to women’s human rights, maximise investment in women’s equal human rights, and ensure gender equality moves forward rather than backward. Creating a world of gender equality and gender justice means building collective power rather than dominating power. It means creating a world where people and planet can flourish – regardless of age, race, gender, class, ethnicity, ability, or sexual orientation and gender identity. It means overthrowing relations of exploitation and violence from the personal to the political to the international levels. It is therefore no wonder that violence against women and social, political, and economic inequality between women and men increase risks of state instability, internal disputes, and international conflict.

“Feminism is a movement to end sexism, sexist exploitation, and oppression”

Feminist activism is the most consistent and important and consistent driver of policy change to combat violence against women – more important than left-wing parties, numbers of women legislators, or even national wealth (Weldon and Htun, 2013). Although gender equality policy agendas are critical to institutionalise feminist demands, their impact on policy is dependent on the presence of a strong, autonomous movement.  Independent feminist activism puts women's status and well-being as their main priority for action, rather than relegating it to be considered at some eventual time in the future. It generates social knowledge about women's position as a group in society, challenges gender roles, and prioritises gender equality issues by shaping national and international agendas, demanding institutional reforms, and innovating new forms of social organisation for gender equality. As a result, feminist activism promotes critical legal reform and funding to combat violence against women at the local level, as well as shifts dynamics and broadens issues discussed for more effective peace processes.