AFGHANISTAN: No Woman No Country

Afghan women want peace, but not at the cost of losing all they have gained in the last 10 years. Yes, they believe in peace, but their rights are non-negotiable. During this transition process, Afghan Women want to emphasize security issues for the military and police but, primarily, for civil society.

As executive director of a nonprofit, my trip to Afghanistan in 2005 was to coordinate the Ministry of Education's mandate to locate and select schools in the Waras region, an area with the greatest need. I had no idea what to expect, only that Waras was a day's drive southwest from Kabul in the opposite direction from the historical Bamiyan city district, where there is a proliferation of NGOs giving aid.

Little did I know that this would turn into six days, and the majority of that time spent on horseback traversing a dozen shale-covered passes of the Surb Koh mountains that surrounds these villages.

The Second International Conference on Afghanistan held in Bonn, Germany last week marked 10 years from the first conference, in 2001, when Hamid Karzai was chosen the leader of an Afghan Interim Authority. In the 10 years that have transpired, Afghanistan women have worked diligently to enact changes for the better -- including a law giving them protection against violence. "But then, as today, the law is rarely enforced, with 80 percent of women and children experiencing some type of violence on a daily basis, occurring in both the cities and the rural areas."

The Afghan women delegates spoke openly about their lack of protection at the press conference hosted by CARE International the day following the Bonn Conference. The women delegates were not invited to participate directly, and this CARE press conference gave them the international platform to emphasize the need to be on equal terms with the men of Afghanistan. "Since women make up 51 percent of the Afghan population, they stressed their right to be actively involved in the discussions, decisions and negotiations during the Transition Process."

The women of the villages have special needs, and spoke to me privately in hushed tones. There are few doctors in the area, and no one was specializing in women's health issues. There is no midwife system in Afghanistan and since most women are shy and modest by nature they often give birth alone. This is one reason that Afghanistan has one of the world's highest maternal mortality rates, at 1,600 for every 100,000 births. The infant mortality rate has similar statistics, at 149 per 1,000 live births. One in four children die before they reach the age of five.

There are striking similarities between the Afghan women, as they look to secure their future, and their American sisters who, surprisingly, are facing a backlash to their own rights. The recent Initiative 26; "a Mississippi state constitutional Personhood amendment that would have given full rights to fertilized eggs, would have banned emergency contraception, birth control pills, and IUDs as well as all abortions, even in cases of rape, incest, or to save the life of the woman or girl. The Personhood Amendment would have even gone so far as to eliminate medical choices for women, including some cancer treatments, in-vitro fertilization, and could allow the state to investigate and even prosecute a woman for a miscarriage."

The Personhood Amendment aims to reverse the gains made by Roe vs Wade. According to Ms., "While women's rights supporters successfully defeated the dangerous Initiative 26. Anti-abortion and anti-birth control extremists have indicated that they intend to put a similar measure on six state ballots in 2012." As of December 14 , 2011, "Personhood USA Petitions claims that GOP Candidates Lead on Personhood; Bachmann, Santorum, Gingrich Sign First-of-its-kind Personhood Pledge."

This past October, women in Topeka, Kansas, were shocked when the district attorney's office announced that they would stop investigating domestic abuse cases. Prosecutors say they're overwhelmed with so many felonies, and the need to incur budget cuts, that they can't afford to pursue these and other misdemeanor cases. This move by the district attorneys office has outraged civil rights advocates and who say, "Austerity has gone too far."

The peaceful landscape is an oasis of calm with the emerald fields of grain, apricots and raisins contrasting with the soft brown mountain backdrop. Village life is simple, but for the women the work is hard; women worked the sparsely fertile land, threshed the wheat, tended to the cattle, carried crops back to the home and cooked the meals.

These examples crystallize the regressive policies that threaten the essential core rights of the individual -- particularly women and children. I have observed, as I travel across the many Silk Road countries for my Peace Caravan project, that this need for an "inclusive voice" remains an ongoing global struggle for women. In the 21st century, I believe that the time is eminent. Raise the rights of women and with an equal determination in the future of their lives; their families, village and nations prosper. For without women, there is no country.

With respect, and to honor the courage of the women delegates at Bonn, The Afghan Women's Network-AWN, and all those who have focused their energies over the past two years to give Afghan women a voice. I present: FACES of the WOMEN of AFGHANISTAN -- photographs from my journey through Afghanistan in 2005.

Washing up, cleaning clothes and showers all take place in a stone room off the main house. The water flows from a hollow bamboo stick protruding from the rock wall falling directly into a trough cut through the stone floor. Clothes are rubbed clean against the floor, scrubbed till the soap runs clear and then left to float in the water filled trough to rinse. It is an amazing piece of engineering, and even though the water was ice cold, exacerbated by the stone floor, it was a luxury and a refreshing pleasure. 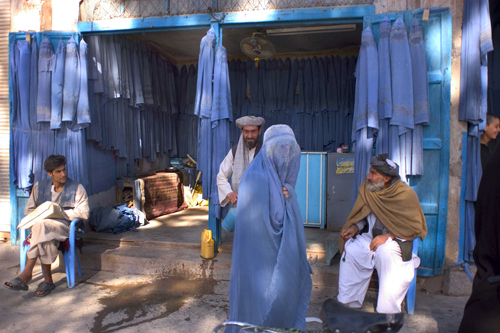 Images and text by Marla Mossman