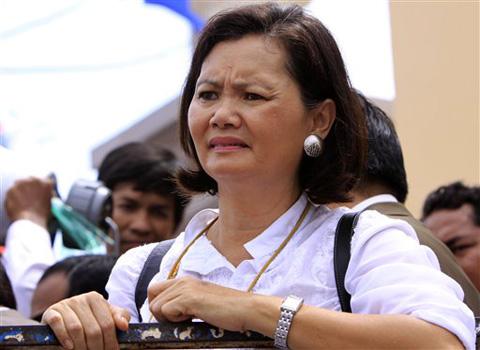 “We women must address issues that women are facing. Therefore, we have to enter into politics."

Cambodia's political parties say they are hoping to get more women candidates to run in local elections next year.
Some say they could potentially double the number of women representing their parties in commune councils after the elections in June 2012.

“If local people see someone as competent, we don't care whether it is a male or female,” he said. “If they both have the same score, the priority would go to the female.”
Ho Naun, who is the chairwoman of the National Assembly's women's affairs committee and a member of the ruling Cambodian People's Party, said the CPP is working to promote more women in both the 2012 commune elections and the 2013 national elections.

“The party leadership pays great attention to women,” she said.

The number of women representatives in local and national leadership remains disproportionate, but it is improving. Only 8 percent of commune councilors were women in 2002, compared to 15 percent after the 2007 elections.
The National Election Committee says nearly 11,500 commune councilor seats will be contested in the June 2012 polls, leaving a lot of room for more women candidates. Parties contesting the elections will be announced Dec. 31.

“I hope the number will reach at least 25 percent this time,” said Pok Nanda, executive director of Women for Prosperity.
Her group has been training women on how to contest elections and working with parties to help them put more women on the ballot.

“The main challenge for women is gaining the trust of their party, because some parties still don't want to place women first on their candidate list,” she said. “This is the No. 1 challenge.”
Another challenge comes from women themselves, she said.

“Some women say they are not sure whether they are able to handle local issues, which are enormous,” Pok Nanda said.
For some women, though, these challenges are not intimidating.
Sin Rosett, who is 25, is an activist for the Sam Rainsy Party who plans to run for chief in a commune in Battambang province.

“From one village to another, I know the issues and what villagers want,” she said. “Once we know their problems and can address them, they will surely support me, no matter how old or young I am.”