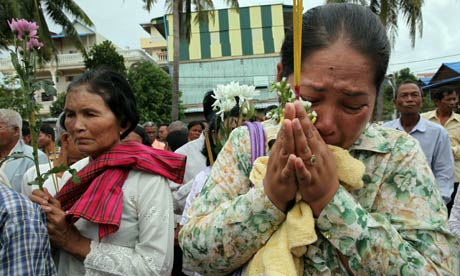 Phnom Penh, CAMBODIA: Net Saveoun was 18 when she was gang raped by Khmer Rouge soldiers. She was one of 30 women selected to “carry salt” and taken to the forest in Pursat province, western Cambodia in 1978. Each of them was beaten, brutalised and had their throat slit before being tossed into an open grave.

“I was the last one,” said Saveoun. “I was hit with an axe and my clothes were torn off and then they raped me. They hit me three times with an axe. Then I was thrown into that hole full of blood. Everyone else was already dead.”
But Saveoun is not a witness in the proceedings that began last week in the extraordinary chambers of the courts of Cambodia (ECCC). Instead she addressed a separate hearing last Thursday, held on the other side of the city as part of the Cambodian 16 days of action on violence against women to highlight sexual crimes committed by the Khmer Rouge.

To the frustration of both victims and campaigners, rape and sexual violence have been broadly excluded from the UN-backed trials. The investigating judges have maintained that the regime punished perpetrators of so-called moral offences, and that rape did not form part of official policy. So only forced marriages have been included in the indictments.

But rights activists say the ECCC has failed to investigate fully allegations of rape. “Through our research we have seen that a lot of rapes were carried out, especially by guards in prisons, and rapes before killings were common,” said Duong Savorn, co-ordinator of the gender based violence project, part of the Cambodian defenders project, which organised the hearing.
There is also evidence to suggest that perpetrators were not punished and that the Khmer Rouge deemed rape an acceptable retribution against “enemies of the state”.

“I heard of only one case where the Khmer Rouge soldier in power who repeatedly raped women was sent to a re-education camp,” said Kasumi Nakagawa, who has interviewed more than 1,500 people in a research project on sexual violence under the Pol Pot regime.

The hearing's panel of experts called for the ECCC to hold senior leaders of the Khmer Rouge to account for the widespread sexual violence inflicted on the Cambodian people.

“Sexual violence is the only crime against humanity that is routinely dismissed as ‘collateral damage',” said Nancee Bright, chief of staff to the UN's special representative on sexual violence in conflict.

Organisers hope the event will encourage victims to speak out and help end the culture of impunity that still haunts Cambodia today.

“[The brutalities of the Khmer Rouge regime] may have happened a long time ago but the legacy of those crimes lives on,” said Bright. “We see sexual violence including trafficking of girls as young as six, we see forced prostitution and gang rape, oftentimes via people within their communities, and we see very little protection of migrant workers.”

This violence can also have devastating impacts on the social and economic rights of Cambodian women, including access to education. “I heard recently about a case of a man going into a house and raping four students,” said Sam Noeun, executive producer at Women's Media Centre of Cambodia. “This can put parents off from sending their daughters to study, especially in the countryside, where it is difficult to travel.”

There are no comprehensive statistics on sexual violence but, according to rights groups, rape is on the rise, especially among young people. While rape is illegal and punishable by law – Cambodia introduced a new penal code last year that clarified the definition of rape – enforcement is a problem. So too is a culture of blaming victims, which ensures few women speak out. Poor women and sex workers are the worst affected.

A 2010 Amnesty International report highlighted the endemic corruption and discrimination in the judicial system that prevents women from accessing justice. Many cases are “settled” out of court with the assistance of corrupt civil servants. Cambodia recently fell 10 places on Transparency International's annual corruption perceptions index; of 182 countries, it now ranks 164th.

“I have no hope at all in the legal system of this country,” said Kong Vanna, who witnessed his sister's rape more than 30 years ago and still lives in the same village as two of the perpetrators. As the statute of limitations under Cambodian law has passed, he has no legal recourse.

Rights activists are adamant the ECCC must end the legacy of impunity and send a clear message that rape is unacceptable. “If we don't address issues of violence in the past, the violence of the present will continue to happen,” said Duong Savorn.