EGYPT: Women March Against Military Violence Against Them 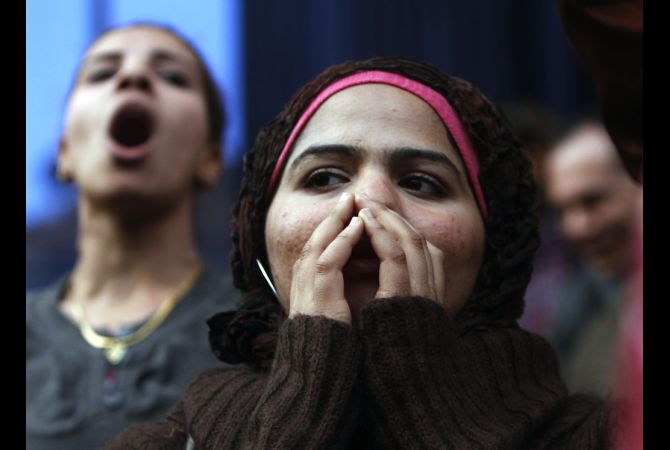 CAIRO: Egyptian women, angered by the recent violence used against them in clashes between police and protesters that has left at least 14 dead and over 700 injured in Cairo over the past five days, marched towards Tahrir Square from different venues around the city on Tuesday.

Thousands of women marched shouting anti-military chants while touring the square, before the march that arrived from the Fine Arts School remained outside the Tahrir administrative building and began to make art.

Thousands of women and men joined the march holding signs that read “we will not be silent about women's abuses” and pictures of the Tahrir girl who five soldiers assaulted over the weekend, dragging her on the pavement snapping her dress open and revealing her bra, before a soldiers leg hit her in the chest.

The image of the military brutality galvanized anger toward the military and police as clashes continued in the Egyptian capital.

Other elderly women were also assaulted by soldiers, who slapped one older woman on the face repeatedly and hit her with their wooden sticks on her back and behind.

The military ruling council admitted violations against female protesters on Monday, but asked the public to “consider the circumstances surrounding the beating.”

“Our honor is a red line,” screamed one protester, commenting on General Adel Emarra, the member of the ruling military council who said at a press conference on Monday that the safety and security of the armed forces is a “red line.”

“They can say what they want, they will not humiliate us or silence us, we welcome death and beaten, but stripping us naked is a red line,” the elderly woman said addressing a group of younger women from the school of art.

On Monday evening, US Secretary of State Hillary Clinton lashed out at their military allies, saying she was “shocked” at the violence perpetrated by the Egyptian military against female protesters.

“This systematic degradation of Egyptian women dishonors the revolution, disgraces the state and its uniform and is not worthy of a great people,” Clinton said in a speech at Georgetown University.

It was arguably the first time an American official has lashed out at their military ally in Egypt, but the recent spate of violence, and especially the violence directed and women, appear to have finally gotten Washington's attention.

“Recent events in Egypt have been particularly shocking. Women are being beaten and humiliated in the same streets where they risked their lives for the revolution only a few short months ago,” Clinton said.