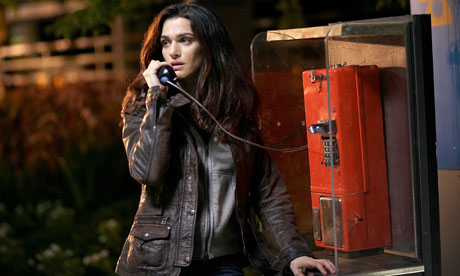 We do not see the torture inflicted on one girl for trying to flee her captors, but we see the tears of her fellow slaves forced to watch. We see the iron bar tossed on to the cellar floor when the punishment is over, and we know what has happened.

The Whistleblower spares you little. It is a film about that most depraved of crimes: trafficking women for enslaved sex, rape and even murder.

As a dramatised portrayal of reality, however, The Whistleblower is "a day at the beach compared to what happened in real life", says its director, Larysa Kondracki. "We show what is just about permissible to show. We couldn't possibly include the three-week desensitisation period, when they burn the girls in particular places. We couldn't really capture the hopelessness of life these women are subjected to."

Starring Rachel Weisz, The Whistleblower, released tomorrow on DVD, is the most searing drama-documentary of recent years and has won many prizes. But more important than the accolades is that everything in the film is true. The film deals with enslavement and rape in Bosnia, not during wartime 20 years ago but during the peace. Worse, not only were the enslaved women's "clients" soldiers and police officers – so too were the traffickers, protected at the top of the United Nations operation in Bosnia.

Such was the crisis sparked by the ensuing film last year that the UN secretary general, Ban Ki-moon, was obliged in October to stage a special screening and to pledge action. But now it emerges that senior UN officials tried to belittle the film and play it down, while the whistleblower herself warns that, for all the UN's professed resolve, "unfortunately, the widespread horror is already there. This is not going to be simple or a quick fix."

Moreover, the UN has shut down effective anti-trafficking initiatives by its own gender affairs chief in Bosnia.

Kathryn Bolkovac, from Nebraska, was sacked by Dyncorp of Virginia, to which peacekeeping police work in Bosnia had been outsourced; her employer claimed she had filed erroneous time-sheets, but was challenged by Bolkovac and overruled by a British employment tribunal in 2002.

Speaking to the Observer last week, Bolkovac said: "The thing that stood out about these cases in Bosnia, and cases that have been reported in other [UN] mission areas, is … that police and humanitarian workers were frequently involved in not only the facilitation of forced sexual abuse, and the use of children and young women in brothels, but in many instances became involved in the trade by racketeering, bribery and outright falsifying of documents as part of a broader criminal syndicate."

Bolkovac volunteered for Bosnia's peacekeeping force in the late 1990s, working on domestic abuse cases, which brought her into contact with the leading UN officer for gender issues, Madeleine Rees, played by Vanessa Redgrave in the film.

"I went to work with large numbers of women who had been the victims of rape during the war," said Rees. "But I ended up working as much with women who were being trafficked and raped by soldiers and police officers sent to keep the peace." Bolkovac uncovered a network of brothels and bars at which kidnapped women were enslaved to "service" peacekeepers. "This was a difficult time in my life," said Bolkovac. "Not being able to know who to trust when you are working with police officers and UN officials … It was clear that the protection of the 'good old boys' club' was a first priority."

As Bolkovac took her concerns up the chain of command, she was blocked; her work was sabotaged, her life threatened. She had two allies: Rees, and a supportive Dutch colleague who became her husband. Rees had been working with wartime rape survivors and law enforcement officers to confront the abuse rackets. Their approach was "based on protection and welfare of victims, providing advice, immunity that was not conditional on them giving evidence, visas to remain and possible asylum", she said. But their success triggered international intervention that sought to refocus on prosecution and repatriation, "ignoring the autonomy of the women themselves". The prosecutions were to be of local criminals only – UN employees enjoyed diplomatic immunity.

"Countries get rated by the US Trafficking in Persons report on their records in dealing with trafficking," said Rees, "for which you need to show results. If you don't prosecute or repatriate enough people, your rating is downgraded, thereby your financial support. So when there were raids, the girls would be shipped home to Ukraine or wherever, probably to be retrafficked. It was a repatriation factory, run by people who had an anti-immigration approach, and didn't want women to try to get into western Europe – no focus on the system or rights of the women. Our approach, by contrast, was slow and beginning to work, so it had to be killed off."

After Bolkovac was fired, she noted that, although Dyncorp was an American company, her contract was "governed under the laws of England". Rees put Bolkovac in touch with a lawyer she knew in Birmingham, Karen Bailey.

"It was a straightforward protected disclosure case," said Bailey. "The issues were huge, and we were up against a vast company. But it wasn't a complex case." On 2 August 2002, the tribunal ruled unanimously that Bolkovac's boss "had a knife in the applicant and was determined that she be removed from her role as gender monitor".

"What they found quite clearly," said Bailey, "was that she was dismissed because she raised the issue of trafficking. The tribunal did not suggest that there was anything inaccurate about the issues she was raising."

In April 2003, Dyncorp dropped its appeal against the verdict, and three days later announced an award by the US state department for a contract to police Iraq.

Kondracki had been waiting for a story like Bolkovac's to come her way. "I wanted to make a film about this theme very badly – but no one wants to watch a film of an enslaved girl being raped for two hours," she said. "Then along came Kathy's story, and a form in which this theme had not been done."

The film is a fictionalised dramatisation of Bolkovac's time in Bosnia, in which the protagonist is employed by a company called "DemocraCorp", and the names of her real-life superiors are changed. Bolkovac also wrote a memoir, in parallel with the film, in which the characters and company are given their real names.

Before the film was released, Dyncorp confirmed that "a handful of individuals were terminated" after inquiries by the army criminal investigative command. The company said Bolkovac's "allegations" had been "aggressively and responsibly addressed".

The company quotes a US army investigating agent as saying: "Neither Dyncorp nor its employees were involved." To which Rees comments: "Dyncorp say there is this investigation, but who has seen it? There was a UN oversight office report on Bosnia, which found there had been trafficking. Kathy won her case, and Dyncorp has not appealed."

In a more recent internal memo obtained by Bolkovac and the Observer, the renamed Dyncorp International denied that any employees were involved in trafficking and explained to employees: "Our goal is to reach out to you proactively with the facts before you hear about them elsewhere … We strongly disagree with Ms Bolkovac's assertions surrounding the circumstances of her dismissal, and with a British employment tribunal that ruled in her favour in 2002."

The film also put the UN under acute scrutiny. An internal UN memo, which was leaked to Kondracki, reports senior officials arguing "that the UN should be proactive and condemn unacceptable practices in Bosnia".

Others, however, "thought that … public screening of the movie at the UN, to be followed by a frank discussion is counterproductive. They preferred downplaying the film."

Bolkovac and Rees were not invited to attend the UN's October screening until six days beforehand (Bolkovac could not make it because her son's wedding was taking place the same day). Kondracki told the UN leadership: "I'd like to say that this screening and panel will lead to genuine discussion and thought about the UN's involvement in sex trafficking and other crimes. I'd like to say that, but I do worry. I know we are going to hear a lot about what has been done since the time depicted in this film, but rhetoric only goes so far. The situation has escalated."

Rees was also fired from her UN post, ostensibly for poor performance, but she won her case at a UN disputes tribunal. She went on to become general secretary of the Women's International League for Peace and Freedom, the international women's rights organisation for social justice and against militarisation, founded during the first world war.

Reflecting on The Whistleblower, Rees said: "It's not enough for the UN to say, 'There are a few rotten apples that need to be got rid of.' They have to understand that this outrageous practice is endemic in the male hegemony of a militarised environment – it's part of locker-room bravado and the high levels of testosterone in fighting armies.

"These crimes are perpetrated by individual men who rape and torture girls on mission, then go home to their wives. And it'll carry on until there's a knock at the door and they find themselves getting arrested in front of the wife and kids."

• This article was amended on 16 January 2012 to add a paragraph making clear that the film is a fictionalised dramatisation of Bolkovac's time in Bosnia.