Lebanese-born photographer Rania Matar, who currently lives in the United States, frequently travels back to her native country. On her last trip home in 2007, she documented the changing and striking ways in which Lebanese Muslim women are engaging in politics.

But the most unexpected effect of this religious renaissance is the overwhelming political participation of many Muslim women. Contrary to common Western belief, Muslim women can be very active on the political scene, organizing events, rallies, mourning sessions, and debates. Feeling threatened in a post-September-11 world that looks with suspicion at any Islamic display of piety, I found that Lebanese Muslim communities are finding refuge in their religion and its overt symbols. 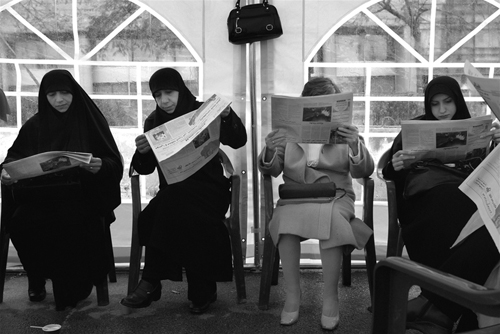 For example, the female veil, which was almost non-existent a decade ago in Lebanon, is making a comeback, even among the younger generations. The veil connotes different things, ranging from modesty and religious devotion, to self-assertion vis-à-vis the West, to being a new fashion trend. In any case, the social pressure to wear a veil among Muslim women of all ages is gradually emerging. Muslims in Lebanon are becoming highly politicized, partly due to the news arriving from the hinterland--Iraq, Israel/Palestine, the political tug-of-war between Iran and the United States--as well as by the recent war between Hezbollah and Israel and the recent political divide in the country.

This political character of Islam is a relatively new phenomenon in Lebanon. In the past, one's identity was defined by one's nationality, but today it is often defined by one's religion. And one's religious affiliation has come to define one's political affiliation. Hezbollah, a Lebanese Islamic political and paramilitary organization, is one perfect example of this blurring of Islam with politics. Muslim women as well are increasingly becoming politicized and playing important roles. For Muslim women, faith has become a powerful tool to being politically active as well as showing their resistance to the West and solidarity with countries at odds with the West. It has also become a fundamental tool for women to deal with their losses, to make sense of the war, and of belonging to the larger, global Muslim community.

I met with women of Hezbollah and other Muslim groups and was invited to participate in the events they organized, at their praying sessions, mourning sessions, political rallies, and simple informal gatherings.

I was struck by the important role the women play: even though they wear the traditional hijab and are often fully covered, they organize events, rallies and meetings, and are very active socially and politically. Their events do not include any men and there is a sense of closeness and friendship between the women fueled by deep devotion, by the belief in a common cause and by an unwavering commitment to Islam.